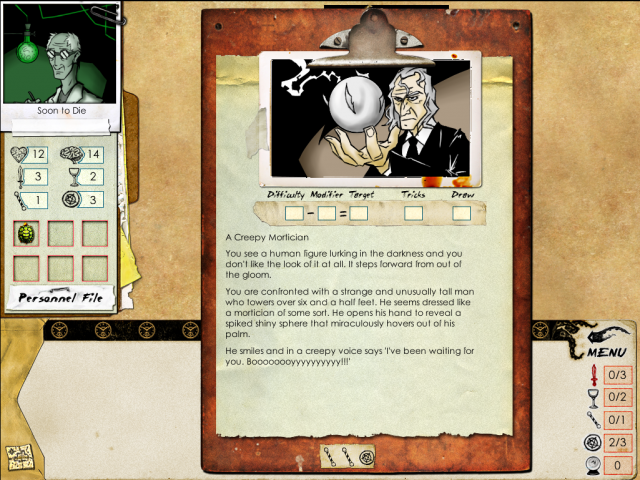 Cryptic Comet’s latest turn based video/boardgame hybrid, Occult Chronicles, is a game I should love. Basically it’s a mash up of Arkham Horror, Elder Sign, and “Roguelikes”.

But I can’t stand it.

It’s not because of its crushing difficulty where you can play with an agent for a while and finally feel like you are making progress only to walk into a room that begins flooding with water and since your particular character doesn’t have the proper stat make up – he/she is as dead as fried chicken for no other reason than you walked into the wrong room. Whoops. It’s ok. I get it. It’s part of the “roguelike” thing. The idea is to see how far you can make it before you die. There is a certain degree of accomplishment that goes along with that.

It’s not because every encounter breaks down into a trick taking card game. You see a zombie! “Deal me some good cards, baby!” Sure it gets repetitive and sometimes it feels like the cards are out to get me and I don’t fully understand why Mr. Davis decided to go with the card game as a resolution mechanism but whatever; I can adjust even if I don’t find it particularly compelling.

It’s not because it’s a tough game to get into. Davis’ other games are hardly user friendly either and they are some of the finest turn based games you buy. Would I like it if a spell description simply explained WHAT it did and not some boring mathematical equation telling me how it works in-game? Yes. Yes I would.

It’s not because it’s impossible to play with a balanced agent. If your agent has a low “wands” rating which basically equates to them being scared shitless at everything they see, it’s going to be a tough and rather short trek into the mansion.

It’s not because the user interface is weak – hell all of Davis’ games suffer from this. If you know Cryptic Comet’s games, you know what to expect – more mouse clicks that a game of Diablo. (Ok, that’s not true. But there is a lot of needless clicking in this game.)

All of those things are annoying by varying degrees but what makes me not want to play Occult Chronicles anymore is that there’s no narrative. The game is clearly paying homage to Lovecraft at every turn and yet there is no suspense. Your character is supposed to be an agent – used to seeing some crazy occult stuff and yet you can lose sanity points by failing to open a locked door? Wha?

You are out to stop some really evil thing from happening – like summoning Cthulhu. You show up inside a large 2D mansion and off you go, looking for …something. There is no rhyme or reason to what you find in the house and there is absolutely no build up whatsoever. You may find a zombie in the opening room. Defeat it and open a door and you might see a haunted stuffed crocodile. Um, ok. There’s haunted ghost armor across the hall. The next room might have a demon. Hey, sure, why not? After that maybe you’ll fight some wolves, or play chess against death itself. Perhaps you’ll see a ghost butler who wants you to perform a quest which may involve you finding a ghost cook who needs you to find his ghost knife. It’s a house of random evil shit. There’s no suspense, no build up to reveal what is lurking in the house. It’s just a hodgepodge of horrors thrown against a wall. In you go!

After two days of dying over and over and over again, sometimes to a creature that likely should kill me but often times via heroic means such as drowning, going crazy because I failed a sanity test when talking to a “creepy mortician”, or getting trapped into a fight that I couldn’t win or flee from, I’ve cashed in my chips.

One thought to “Occult Chronicles Review”