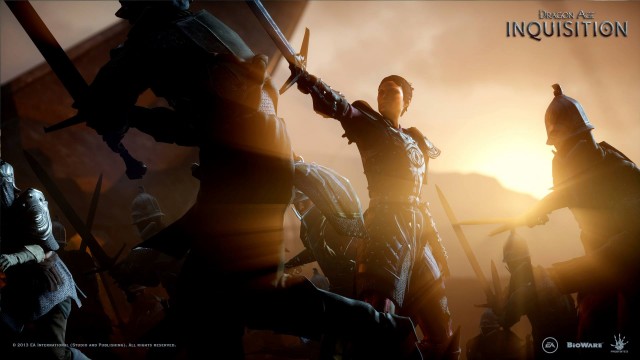 Labor Day has come and gone and the last time I penned anything we lived in a world where I could go 48 hours without hearing anything about Miley Cyrus. I didn’t even know what twerking was. Yes, it was a happier, simpler time. But fall is coming and I’m here with renewed vigor to, like, write things and stuff. (Said vigor may least three weeks or three years, get your bets in now!)

After the break, lots of stuff from the past week summarized for your edification…

Dragon Age 3. Now with 100% More Origins. And 150% More Mass Effect 3! RPS saw the game. They wrote things. (Along with about a billion other hosers.) Many promising things that you should go read, but let me snip this one small chunk from them:

Tales of Grey Wardens and blights are in history now, with the world facing a new threat – a Fade Rift. The Fade is the magical realm that exists alongside our own, filled with horrors and abominations. It is the place with which mages are most in touch, and hence why mages are so feared and vilified in the world. And now it’s torn open, and all manner of beasties are pouring in. And that’s trouble.

However, rather oddly, little seems to be being done about it. Each clan of people, each enclaved race, seems extraordinarily wrapped up in their own disasters, and none is able to tackle the Fade troubles as well. And BioWare were keen for us to know that this just seems a little bit too convenient. So you, whomever you might decide to be (and this time out that can be Human, Elf, Dwarf or new to Inquisition, Qunari), are heading up a new Inquisition, to Get. Shit. Done.

On the non-catty side of the fence, tactical overhead view in combat is evidently back (YES!), there is not auto-healing between battles (m’kay), and locations won’t scale their difficulty to your level (YES!). These are things you should be excited about.

Is the Enemy Within Firaxis Itself? You people know how much I love XCOM: Enemy Unknown. I love it so much I eventually caved and stopped using a hyphen in the title. They earned it. This trailer and some of the things I’ve read about the recently announced expansion, Enemy Within, however, have me wary. Sure, I’m glad international troops will have international voice sets, etc., but augmentation canisters on levels that self-destruct if you don’t reach them in time? Is that a bridge that’s just entirely too… gamey? It feels like it. As do the mechs in this entirely too action-packed trailer. Enemy Unknown wasn’t an action game and marketing it like one strips away the qualities that make it unique and awesome. I’ll keep my mind open until it comes out in November, but yellow flags raised and all that.

Outlook Cloudy. Ask us Later. Microsoft is telling people they absolutely will support external storage for the Xbox One. Just not at lunch and, no, please don’t ask us how long you’ll have to wait. Next question. This is the natural evolution of the release now, patch later mentality that began with PC games roughly 20 years ago. It’s filtered through to console games and is now infecting game consoles themselves. (Isn’t the Wii U still promising features that buyers should have had at launch?) How about you guys call me when you’re done fiddling and the console is really complete and maybe then I’ll consider giving you my money… if you throw in a pack of doughnuts and a hooker. (Disclaimer to fiancee: Said hooker is not for me, I swear!)

Consider Yourself Teased. It’s an actiony Space Hulk game. It has a teaser. It’s also from Focus Home and Cyanide (two companies with spotty track records) and Streum (a company with no track record to me). Given that, showing a pre-rendered space marine stomping around buys you… nothing really.

Balder’s Gate 2 Gets Enhanced. Joystiq says it’s coming November 15th. The first game’s Enhanced Edition demonstrated to me that the Infinity Engine isn’t remotely well-suited enough to iOS to have been worth what I spent on the iPad version. It’s still a terrific PC game, though. For one of my favorite games of all time, I’m willing to buy again from Trent Oster’s crew of merry rebuilders.

Star Citizen. Cash Cow. Having now been funded to the tune of $17 million, I’m starting to regret paying not attention to the game whatsoever. My wallet is in my hand, Mr. Roberts. Dare I pull out more wads of cash for you?

Short, Short Reviews. Bill just wrote about Gone Home and Occult Chronicles. I’ve played both and my opinion can be summed up thusly: What he said.

In Summation. Brakketology as a recurring name at the top of this column. Lame or incredibly lame?

6 thoughts to “Brakketology: Summer’s Over Edition”