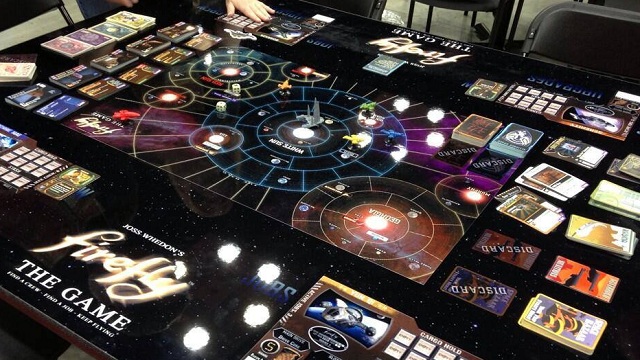 In this day and age a guy has to do what he can to get by. That means you have to take a lot of jobs to make ends meet, even legal ones. A Firefly class boat needs parts and supplies to keep it in the air, after all. In this week’s Brakketology, if you haven’t guessed, I got a chance to play Firefly: The Game. Along with some first impressions of that, there’s a promising first look at Banner Saga (via RPS) that demands you pay attention, more Enemy Within bits, Project Eternity continues its climb up my list of most anticipated games, Amazon does something that almost made my life better, a real Ultima lands on iOS, and Xbox One gets a release date…

Find a job. Find a crew. Keep flying. I talked a bit (or tried to) about Firefly: The Game on JtS this week. I loved the thing. It’s exactly what a Firefly boardgame should be and if you’re a boardgamer and a fan of the series, you should absolutely give it a look. The theme is exactly as described in bold. You’re the captain of a Firefly and you need work, legal or otherwise. The board is big chunk of space populated by the many moons and planets featured (and not featured) in the show and you travel from place to place seeking work from the likes of Badger, and Patience, and –shudder– Niska. Do not disappoint Niska. You also have to build a crew that complements the skills required to execute on a given job, you have to keep them happy, and you need supplies (not to mention gas) to keep your boat in the air. It’s thematically perfect. The only flaw is that it’s a bit solitaire. There are means by which you can interact with other players while on-planet together, trading items, stealing crew, etc., but it’s not required and in the game I played it never happened. It’s also a game that takes a full play-through to get the hang of. In my game there was a lot of downtime while people figure out their moves, consulted rules, etc. It’s the kind of thing that goes away once at least a couple players know the game cold, but it’s a factor you should consider before breaking it out. Also, it’s a four-player limit, which it really didn’t need to be. I’m betting that, like Spartacus (also from GF9), that the inevitable expansion addresses this. (On the bright side, you can also play it with just one player.)

Banner Saga. It Looks Good. RPS has a hands-on look at Banner Saga. It’s long and detailed and you should read it. This was a game that I had intended to Kickstart back in the day, but missed the deadline because I am, of course, monumentally lazy (and cheap). Now that single-player information is starting to come out, the game sounds (and looks) exactly as good as I thought it did during its proposal stage. Here’s a taste from RPS:

Then the ice would break.

There are comparisons to Oregon’s Trail (in a good way) that follow, not to mention the sorts of hooks and subverting expectations that any gamer will appreciate. Go. Read.

XCOM: Enemy Within Tries to Look Spontaneous. There is now a highly, highly scripted demo, which is so contrary to what XCOM is that it’s hard to draw much of a conclusion from it. It’s worth noting that the more scripted the events in a mission in Enemy Unknown, generally, the less interesting that mission was. It concerns me when they talk about “new environments” they haven’t addressed them in the context of just another mission, because that’s what the game needs from an expansion. More types of random missions. More variety of environments for random missions. A longer game to accommodate it all. More ways to customize your squad is nice too, but I’m not on-board yet with the whole mech and genetic modification angle. I’m strictly wait and see on that. If I can be permitted to concern troll Firaxis, I’m wary their focus is on expanding on the wrong things. I’ll still buy, though, because that’s how much goodwill they earned from me with Enemy Unknown.

For those looking for hope, here’s a blurb from RPS who got some hands-on time with it:

I got to play a little of Enemy Within last week, and the net effect of these new units was that aggressive strategies felt much more effective and satisfying. I usually turtle so hard that people want to turn me into soup, but mechs’ ability to essentially function as mobile cover and a nice helping of active camouflage for weaker units made me feel like I was better able to control the battlefield. However, to balance that out, aliens have mechs too, and I nearly ingested my Adam’s apple every time a sectoid gave one a near-impregnable shield via mind merge. The short version? It wasn’t necessarily better or worse than the way I usually play XCOM, but it was certainly different.

Project Eternity Gets a Stronghold. Obsidian came out with a fresh info-dump on what is one of my top three Most Anticipated Games That Might Come Out Next Year — Eternity. The topic du jour is the player’s stronghold. This is no longer a fresh or novel concept for an RPG, but that does not mean it can’t be cool if done well. This looks cool, mostly because it will have function beyond being a place to dump stuff. Here’s a list of passive things it’ll do. You’ll find much more at the Kickstarter page; the bit about constructing a prison sounds particularly cool so do click over.

Xbox One Needs a Hug. Has no Takers. Lots of Xbox One stuff going on this week. November 22nd is the first day you can officially not buy the console. Lucky you! What’s amazing is that I’m actually on the fence about it. Despite the fact that I’ve been doing 100% of my gaming via PC the past year, and am perfectly happy with that, I almost want this console just to have it. Maybe it’s because Microsoft keeps bending over backwards to let people know that, “Yes, we know you hate us and everything we stand for, but look at all the ways we’re maybe(?) changing things you don’t like just to make you happy!” Like, teasing the possibility of backwards compatibility… someday. There’s a desperation so thick it makes me want to give them a conciliatory hug by just buying the thing. Also, I think my kids will like the new Kinect and it might keep them off my PC. Also also, I haven’t bought a new gadget in a long time and I’m getting twitchy. It’s a sickness.

On second thought, this ad is so full of awful maybe I’ll reserve my hug for awhile longer…

Because football wasn’t complete until Xbox One. Maybe it’ll even solve that pesky concussion problem.

Ultima IV to iOS. If you want to get the stink of the kinda sorta free-to-play abomination that is Quest of the Avatar, you can now get a retro fix of Ultima IV on iOS as Mythic –let’s just call it an apology even though it isn’t one– ported the Commodore 64 version over to Apple’s mega-mall of a store. And it’s free.

Kindle Readers to Get the Best of Both Worlds? Almost. Amazon, which already gets props for doing this with their music catalog, will now let you purchase their print books and, at the publisher’s discretion, let you tack on the ebook for a small fee (free in some cases). As a Kindle user who laments not being able to share books I enjoy with the people I know, this is a long overdue solution. Now if only I could tack on the print book sale to all my ebook purchases from the last year. Nothing like punishing those of us who bought into your platform already. Ugh.

One thought to “Brakketology Gets a Job; Keeps Flying”