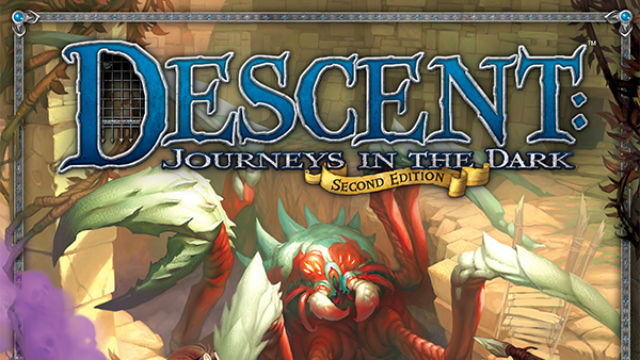 The original Descent was probably as famous for its seemingly endless expansions as its astronomical play time. Some gamers made almost an entire hobby out of trying to collect them all. Arguably, the new edition with its focus on campaign play is even more suited to expansionism that its predecessor. So, after small box addition Lair of the Wyrm we now have the first big box expansion, Labyrinth of Ruin.

And it is a big box, with more of everything. And I mean everything. Pretty much every deck in the base game now has some extra cards, there are new rules (though nothing terribly demanding), new heroes, monsters, tiles and archetypes and, of course, a brand new campaign. There’s so much it’s hard to know where to start.

So we’ll start at the first thing most people are going to look at when they open the box: the monster figures. And there’s some cracking new sculpts too, the Volcurix Reaver in particular is fantastically detailed for a board game figure, even if it is only human-sized. Power-wise my favourite is the Goblin Witcher, who can curse heroes (a new effect) and then burn an action to move them two squares. Of course, thanks to the open slot mechanic, you can incorporate these new creatures into adventures from the original game.

As for heroes themselves, well they’re perhaps a bit less distinctive. The additions are a swashbuckler, an enchantress of dubious morality, a wild ranger and a dwarven alchemist, all solid fantasy stereotypes with powers to match. What’s more interesting is that they’re clearly lined up for the new archetypes of Treasure Hunter, Hexer, Beastmaster and Apothecary respectively.

All bring something new to the game. The Beastermaster’s powers revolve around his lupine familiar, a new piece controlled by the hero player, while the Treasure Hunter gets lots of skills which manipulate the search deck. The Apothecary needs to generate Elixir tokens which can then be turned to a variety of uses, but the Hexer is the least interesting, and possibly underpowered because the abilities involve hexing something with an attack first before use.

For most of the other expanded decks, the additional cards add pleasing variety but nothing especially noteworthy. The exception is the new Overlord cards. Firstly, they flesh out the very limited set of choices the Overlord had for adding to his deck in campaign play. Second there’s a new starter set of basic cards to use instead of the originals if you want. They’re very different, with many of them specifically targeting particular hero types with extra-nasty effects. 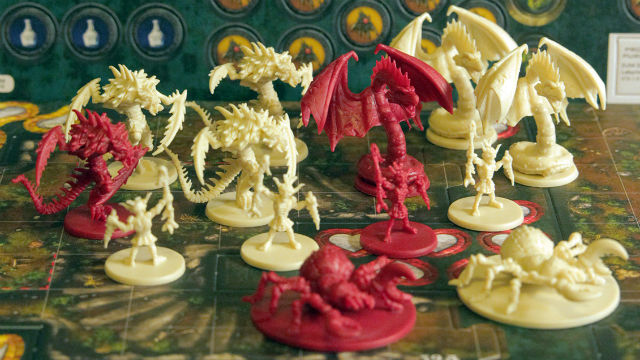 Finally we come to the campaign itself. While lot of Descent veterans might view this as the real meat of the expansion, I actually think it’s the weakest part. There’s a whole raft of new adventures, set on a new campaign map and with the two-act structure introduced in the original game. Many of them utilise one or more of the new map tiles, a mix of oddly shaped and very large rooms which are interesting to play in, especially given the propensity of the game to revolve around map choke points.

The other thing that stands out about the campaign is that there’s now a criss-cross path through the various adventures to reach the finale. That means there’s closer control of the narrative since only certain paths make sense. It also allows the designers to ensure that there are always particular choices to be made. In this instance, the first branch point determines which of two allies the heroes will get, a new type of friendly piece to aid them in their adventures. It also ensures that later, the Overlord will have an opportunity to turn this new adventurer to his own side.

However, that’s hardly ground-breaking material and otherwise there’s nothing in either the narrative or the mechanics of these new quests that really stands out from the base game. Partly that’s down to the fact that a competitive board game isn’t really a great format for intricate and absorbing storytelling. Partly it’s down to the second edition of Descent being a relatively simple game that can’t support endless, detailed rules novelties. But either way I just felt I wanted a bit more from the campaign than I actually got.

But when you stand back, I’m not sure it really matters. Both this new and the original campaign are fun to play through, and fun to pick adventures from for one-off sessions. The real draw here isn’t really the campaign; it’s the wealth of excellent expansion material you get which can be used every time you play: the heroes, monsters, archetypes and everything else.

For that reason I wouldn’t hesitate to recommend this to anyone who plays Descent 2nd edition on anything more than an occasional basis. Even if you’ve never played the campaign that comes with the base game, and even if you never play this one, the bulk of the new material is well-designed, adding a wealth of flavour, tactics and choices that the original just didn’t have. As a bonus, if you take the inserts out, all the material just about crams into one box.