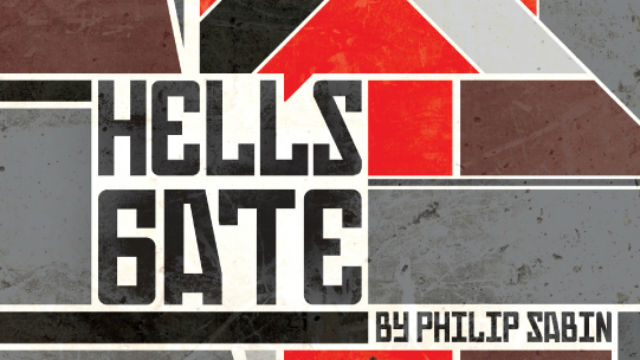 If you’re in the habit of picking through lists of board and video games about World War 2, you’ll see a lot of names you recognise from deeply-buried folk memories and history classes. Normandy and the Bulge, El Alamein and Monte Cassino, Stalingrad and Kursk. But there’s one battle which seems to attract considerably more interest from game designers than it does the general public: the Korsun Pocket. And that’s what Hell’s Gate is all about.

It has an interesting pedigree, this game. Originally designed by an university lecturer as a means of demonstrating the dynamics of encirclement operations in-class, it found its way into the academic literature and from there to Victory Point Games who’ve produced this lovely print. The soot-besmirched counters that result from their laser cutting process might bother some people, but there’s no doubting the durability of the thick card or the evocatively polar board art. You can almost hear the icy winds sweeping across the steppe as you play.

But how does it play? Well, it’s a masterclass in how the tried and tested foundations of hex and counter gaming can result in startlingly unusual games as a result of very simple tweaks. The need to fit it into university classes ensures it’s fast playing and easy to lean, especially if you’ve got any experience of the genre at all. However, several of the single scenario’s eight turns have their own unique special rules which are a pain to internalize and apply.

The first things veterans will probably notice is that you attack and then move, rather than the more traditional sequence of move and attack. This is partly an accessibility issue because it removes the need for additional rules to cover breakthrough movement after successful attacks. Which would, in truth, have been absurdly cumbersome for a game with so few hexes and units.

The other key oddity on display is the retreat rules. Normally retreat is something enforced onto defending units as the result of an attack. But in Hell’s Gate, the defender can choose to retreat to avoid taking a step loss, as long as the combat result doesn’t do more damage than the unit has steps. And given that the combat resolution table mostly deals in one or two damage, and most units have two steps, retreat tends to be a viable option to save your troops.

That’s hugely unrealistic, of course. There isn’t a commander in history who wouldn’t have given a limb for the opportunity to choose whether his troops stood and fought to the last man or fell back. But realism at that level isn’t the point of the game. Its function is to demonstrate the logistics of an encirclement, the command decisions faced by the aggressors and the trapped, and in that respect it succeeds admirably. 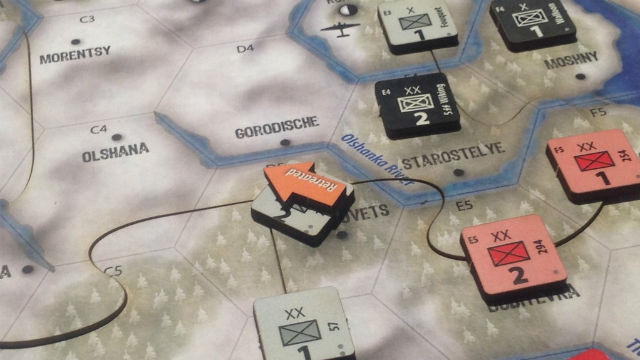 The Russian player starts with some powerful tank units to the north and south of the board, and some temptingly weak links in the Germans lines to launch them at. But right away there are choice and compromises that need to be made. While a southern breakthrough is all but assured, the north is a harder prospect. The game allows attackers to sacrifice a unit step to improve the results, but doing so makes a German counterattack more likely. Or a weaker attack against truly feeble opposition in the northeast is a possibility, but it would leave less troops cut off.

Eventually, the German units are almost certain to be cut off, although the amount of time this takes can have a significant impact on how the game plays out. Then the challenge is for the Germans to try and extract as many troops as possible. Early on, actually breaking the encirclement and re-establishing supply lines is a realistic possibility. Later it becomes a matter of pushing to get the trapped units and their would-be relievers as close to each other as possible to make the most of a last-turn “breakout” special rule (with important errata) which can rescue units without combat.

The reason for this special rule seems largely to be the result of that odd retreat mechanic. The fact retreating is always an option makes it near-impossible for the Germans to actually penetrate the Soviet lines beyond the first couple of turns. This is, I suspect, an academic decision: the game is supposed to teach about encirclement and not daring (and ahistorical) rescue missions. But it can be pretty anti-climactic, especially for the German player who is left with little to do in the mid to late game.

Fortunately the game plays well solo. Indeed I actually think that’s probably how it’s best enjoyed. There are other minor niggles for two players, chief amongst them a tendency for unlucky dice roll results to have catastrophic effects. There’s a 1 in 3 chance each turn, for instance, for the weather to turn from snow to mud which is an enormous hindrance to whoever is on the offensive at the time (usually the Russians) and the combat resolution table can also throw up anomalies.

READ ALSO:  Through These Fields of Destruction

But as a solitaire exercise in teaching yourself about encirclement, and particularly about the encirclement of Korsun, it works very well. While the small scale and single scenario obviously limit replay value there’s a surprising amount of variety to explore. I’ve seen games that conform to the history but others where the Russians slowly built an impenetrable wall, where the Germans made continual south-western breakthroughs, where there was no encirclement and the Axis smashed a red army reinforcement pool to pieces. In other words, it serves it’s stated purpose very well indeed.