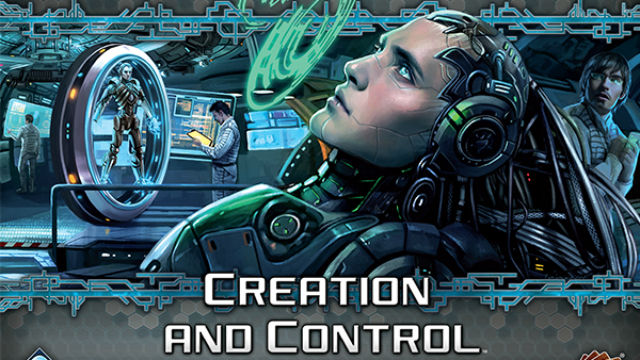 Like all the expansion before it, the focus is squarely on one faction each for the corporation and runner players, in this case Haas-Bioroid and the Shapers respectively. That’s a bit more odd considering you get a lot more cards in this deck but there you go. The Shapers probably needed it as, despite their name, they’re probably the most shapeless, ill-defined faction so far. And I like Haas because I’m a former genetic engineer myself. So, again, I approve mightily.

So what do we learn about the Shapers? The most amazing thing about Netrunner, in my opinion, isn’t simply that it’s a great game. There are lots of great games. What makes Netrunner special is the emergent theme, the way that if you stripped away the mediocre art and the pseudo-intellectual quotes and the stupid, obtuse jargon the game employs, it would still feel like a game about hackers trying to bypass corporate security and steal digital secrets. And what we learn about the Shapers follows that pattern.

You see the same playful spirit in their aggressive cards, too. Atman, an icebreaker you can pump up to any strength you like and keep it there, forever, and which can break any subroutine of any kind looks like a game breaker until you realise the strength is fixed, so it’s really only useful against one kind of ice card. But you get to choose that card. Similarly Cypher-Cypher is a super-cheap and powerful icebreaker but it’s tied to one target server. Escher, an event that sees you rearranging corporate ice as you see fit. Destruction by exploration.

So what about the corporation? Haas-Bioroid had a much stronger sense of identity than the Shapers before this set, but they were a little boring to play. Creation and Control adds spice and uncertainty. There’s a new ambush asset which burns the runner for brain damage in exchange for a few creds. Another shock is Howler, a 1-cost ice card that does nothing except install and activate another piece of ice, for free, directly behind it. Tyr’s hand is an upgrade you can trash to stop an ice subroutine being bypassed. Runs on unknown Bioroid servers now have a similar amount of inbuilt tension and danger as the other corporations. 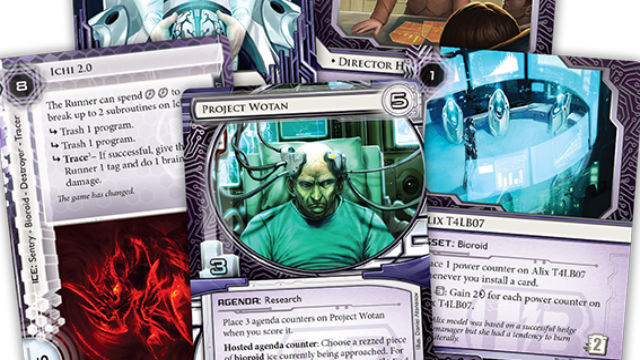 Actions generally are a focus, as befitting the Haas-Bioroid vulnerability of having ice that can be bypassed simply by the runner spending actions. The Efficiency Committee agenda, for instance, which gives you two actions in exchange for one and an advancement token. Or the Arcology asset which does the same thing except it’s not an agenda, even though it’ll look like one to the runner. You can save actions a different way with the Pet Project agenda which effectively gives you a bunch of free installs.

There are a few neutral cards, too, but they’re generally less interesting. The most powerful is the runner card Daily Casts which costs three credits but pays out eight, two a turn. It’s pretty easy for runners to make a lot of money with the current Netrunner card selection, and this set makes it easier. Indeed I’ve seen some complaints from tournament players and real enthusiasts that Creation and Control has made the game too lopsided in favour of the runner.

That might be true, although if it is it’ll probably get re-balanced over the next few data pack releases. I can’t really say because I’m not a tournament player or a real enthusiast but a casual gamer who likes to break out Android occasionally with friends and savour that amazing emergent theme. I don’t have that whole arms-race deckbuilding thing going on, and I tend to construct decks just for their amusement value and give them to new players to teach the game.

Given that, one of the most interesting things for me in this set wasn’t so much the new cards but the suggested preconstructed decks to use them. A Haas-Bioroid deck loaded with ludicrously expensive and powerful ice, but with lots of tricksy ways to mitigate the credit cost, so allowing you to be in a much more powerful place than it may appear to the runner. A shaper deck which is all about installing and recycling stuff on the cheap, saving money to power one or two game-changing cards.

I like these decks a lot. Not because there’s anything inherently amazing about them: the corporation one in particular is quite difficult to play. I like them as a casual gamer because they seem very well matched, designed to set up interesting trade-offs and gradual power creep against one another. I like them because they’re full of cards that can be used creatively, challenging the player and demonstrating to the neophyte how much scope for cleverly synchronizing card effects there is in this game.

I like Creation and Control a lot. You could go a long way with Netrunner just owning this and the base set, especially if you don’t intend to be a frequent player. Although I’m glad I’ve got a few more cards personally, just to flesh out my beloved Jinteki. You won’t really need any more data packs. But be warned: if you’ve got this, you’ll probably want them.