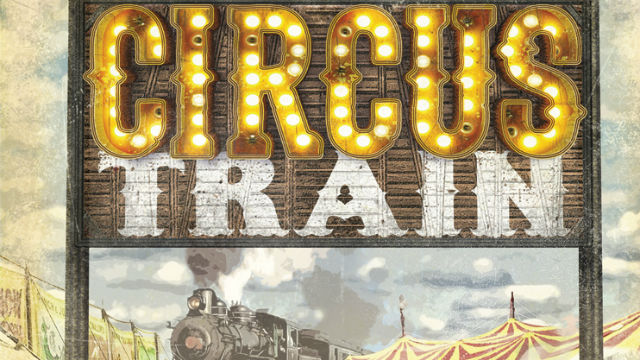 Roll up! Roll up for the greatest show on earth! Who doesn’t love a circus? Well, now you get the chance to run your own in Circus Train. Not in the modern day, of course, with its annoying animal welfare laws and societal distaste for freak-show exhibits, but in depression-era America.

This is the second edition of this game. Both it and the original were published by the delightfully cheapskate yet innovative Victory Point Games. Except you wouldn’t know it if this was your first VPG title. In place of the flimsy counters and paper map of the original you’ve now got a mounted jigsaw board and chunky counters. They’re laser cut, so be prepared to wipe a lot of soot off your fingers for the first few games, but they’re worth it for the bargain basement price.

The new edition also includes the expansion set from the original, meaning you can play with up to five and add a bunch of new acts to your big top. But the most impressive update for me is the art. Everything is wonderfully evocative of its setting, from the sepia-tinted calendar that serves as a turn track, to the combination of big-show and typewriter fonts used throughout the production.

So it looks great for the price. How does it play? Not quite as you might imagine from looking at the box. You might reasonably expect a richly thematic laugh-a-minute recreation of circus life, but what you get is a medium-weight strategy game with some tough decisions. Not that there isn’t some cracking flavour baked in to the rules, what with the event cards and the fact everyone starts in Canada to stock up on booze before touring the bone-dry states.

READ ALSO:  Cracked LCD- There will be Games HD part 3- I Built My Dreams Around You

Once you’ve read the rules, and understood this is a moderately meaty game, you’ll probably be imagining a typical modern strategy title with fairly limited interaction. There’s clear mention that one of the actions you can take allows you to steal performers from other unfortunate circuses on the same space, but that’s your lot.

Except it isn’t. When you actually play the game, it becomes clear that this is actually a nasty, vicious, cutthroat exercise in every sense. While there might only be one action to steal things directly from other players, the whole game revolves around getting to stuff on the board like unemployed clowns or pent up demand for entertainment before anyone else does, claiming it from right under their noses and, ideally, laughing maniacally at their bad timing while thumbing your nose.

To rub salt into their wounds, the most common thing that you’ll be claiming is the chance to put on a show and earn money, which leaves them bereft of not only points but income. And early on everyone will realise that they need to be just as wary of the game itself as they do the other players when they’re forced to pay wages and find that the pittance they’d earned so far won’t cover the bill and all their performers leave in high dudgeon.

And so everyone will end up limping across the Midwest, scrabbling in the ashes of other failed circuses for talent to put on a show and get back on track. Except, of course, that means all the players desperately homing in on the same location and hoping their depleted hand of action cards have the right combinations of moves to get them there first.

At this point, two things will happen. First, the player who claims the prize and the player who almost got there will exchange regrettable and bitter insults, and possibly blows. Second, everyone will realise that had they played better during the opening turns in the game, none of them need be in this position. And then then game is well and truly on.

It’s a mystery to me why this game isn’t better regarded. When I got swept away by the first wave of German import board games I had this peculiar vision that what I’d get was a tide of easily learned, fast playing games which were nevertheless strategically demanding and full of interaction. What I got mostly were bland, empty shells of games, bereft of thrills and drama. Circus Train is the sort of game I was expecting, except it turned up a decade too late.

One possible critique is that the feeling of weight and depth is partly illusory. Different show demands reward players depending on what acts they have to please the audience, and are drawn and placed randomly from a bag each turn. So if you’re lucky enough to be near a city that’s baying for whatever artistry you specialize in, you’ll put on a great show. But the scoring mechanic, which feeds in drips and drabs from a variety of sources, does its best to level things out and, one or two screwy games aside, mostly succeeds.

However that maddeningly slow infusion of precious points does also mean that the victor can become predictable. Without the opportunity to score some spectacular points bonanzas, a significant lead opened up in the mid-game can be hard to catch, even with everyone striving to viciously peg the leader back whenever possible.

But here’s the thing. I saw that situation arise a couple of times when playing Circus Train and both times everyone round the table remarked on it, and both times precisely no-one cared. Everyone was too busy humming big-top music, settling their most pressing vendettas and grudges from earlier in the game and just trying their hardest to put on the greatest show on earth. No-one cared how it ended because they were just too busy having a grand old time.

In many respects, it’s harder to praise a game more than that. Circus Train has flaws and it won’t be hitting my gaming table every week. But with solo rules that’ll really teach you how badly the game punishes economic mismanagement, and an advanced variant that adds a little more strategy and a lot more flavour, it’s streets ahead of many more professionally produced games, and a definite keeper.

One thought to “Circus Train Review”