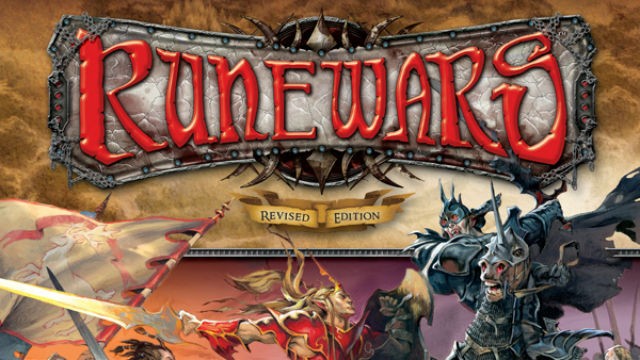 Fantasy wargames have a sad history of being far too much wargame and not enough fantasy, tired repetitions of stacking limits and zones of control but with dragons in place of Panzers. Adventure board games, in a similar vein, have always struggled with the inherent problems of making a genre that celebrates individual achievement and massive power differentials into an interactive, strategic form. Runewars seems like Fantasy Flight’s attempt to solve both these problems at one stroke.

Players pick a side, build a board and launch into a fast-paced cycle of season-based turns in an attempt to conquer as many dragon runes as possible. There are various routes for doing so. The time honoured method of annexing territory from your neighbours is one, and that’s your fantasy wargame. Slipping hero figures silently through the massed hordes of your opponents to fulfil quests in different territories is another, and there is your adventure game. Finally there are various events and auctions that can occasionally be manipulated to gain a rune and that’s pure Fantasy Flight, an uneasy but often brilliant mish-mash of old-time game theme with modern-style mechanics.

As a synthesis of disparate game styles it works only partially. The fantasy wargame element is compelling, with each commander forced to balance a variety of competing demands in order to succeed. A number of different troop types must be considered, along with the possibility of allying with neutral forces by spending precious influence. There are the mutually exclusive requirements to mass troops for both attack and defence in different areas, and the need to recruit more to replace losses. The whole is tied into an intricate and absorbing dance by the mechanics around the order cards you use to perform these actions and others, a set of eight from which you choose four each turn, but the order in which you chose to resolve them can have many unforeseen knock-on effects.

It’s the adventure game element that doesn’t quite gel. Heroes can, in theory, join battles and gain experience for new powers and abilities, but these feel like rarely used adjuncts to their main function which is scouting enemy territory for runes and fulfilling quests for rewards. To support this relatively minor role requires a comprehensive kitchen sink of rules, cards and tokens in typical Fantasy Flight fashion. It feels like a warhammer to crack a nut. Indeed the whole game is tough to digest, with lots of wordy rules and a badly laid out instruction manual.

But if it feels like the fusion of disparate styles is only semi-successful and supported by an overly bloated set of mechanics, it’s hard to argue that the game as a whole isn’t an impressive thing in its own right. Who knows, I could well be wrong about the synthesis of different genres that went into the game: perhaps that was never the intention, merely how it feels. Perhaps the intention was to create a compelling and epic strategy game that nevertheless managed to retain plenty of excitement and a manageable play time. If so, it was hugely successful. 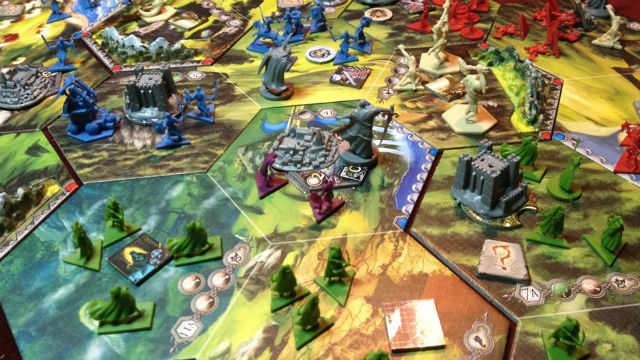 You see, while there’s the ever-present temptation to get kitted up and dish out the pain to all and sundry, there are a whole lot of other moving parts to consider as well. You can, for instance, consolidate your gains by building strongholds and then improve your situation by developing them for a variety of bonuses. To gain these – and to do more besides, like feed your troops – you’ll need resources, which means controlling sufficient tiles of the right type and possibly executing the “harvest” order at an opportune moment during the round.

It’s in this rich detail that the reason for all those annoying interlocking rules becomes clear. The game might be complex and obtuse, but you get an awful lot in exchange for the effort of learning it. There’s a clever mix of strategy and tactics, an a living, breathing fantasy world over which unravels a dramatic narrative. As you get to grips with the game, it slowly starts to feel like there could have been a whole lot more complexity given the amount of different things that the game succeeds in delivering.

A big part of the appeal is the variety and asymmetry that’s baked into the mix. The board is a jigsaw of variably sized and shaped groups of hexagons, arranged uniquely on each play and offering different strategic challenges. The arrangement of the dragon runes is also varied, and the real ones are mixed with fakes, allowing plenty of opportunity for bluff and misdirection. Each player has a different race with different units and development types, mirroring the behaviour of their fantasy archetype. But the special abilities specific to particular unit types don’t always come into play, helping keep the game tense and the asymmetry well-balanced.

As if all this were insufficient, Runewars also manages to comfortably balance strategy with diplomacy. The craggy land masses that the map tiles create don’t always leave that many shared borders, dragon runes can be gained from methods other than conquest and with effectively just six turns to in which to win, time is always snapping at your heels. It all adds up to an environment in which alliances and peace deals can play only a small part in determining who wins, but are nevertheless fun to indulge in. This in turn means the game scales rather better than others in the grand strategy style: playing with two is perfectly satisfying, and faster to boot.

Runewars is a game I wish I had time to play and explore more. The three to five hour window it needs is small in comparison with most other games on this scale, but it’s still a tough ask for a parent of small children. But to achieve what it achieves, its heady mixture of rich narrative, crunchy strategy and head-on conflict, it could hardly be more approachable than it already is. It’s further proof, if any were needed, that in order to enjoy an epic gaming experience one must invest relatively epic amounts of time and effort.