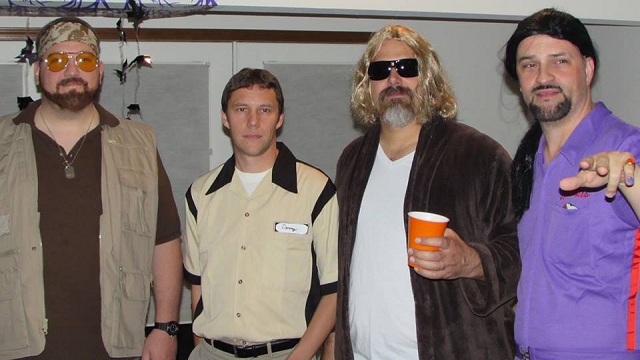 This is from my buddy’s annual best of its breed Halloween party last weekend. Call it an unofficial and wholly fictional Big Lebowski reunion tour. On one hand, being asked to be Donny is both A) uninspiring – I mean how do you replicate Steve Buscemi’s look in that movie? Guy wears bowling shirts and Dockers. Done. And B) debilitating to one’s soul, because you know you’ll spend the entire evening being told, “Shut the fuck up, Donny.”

On the other hand, this collection is incomplete without Donny and these dear friends of mine did an unbelievable job replicating Jesus, Walter, and The Dude. Walter in particular is just an eerie likeness. Also, given A and B, there may be no one else in the world, and certainly not in my social circle, better-suited to manning the role. That may be a dubious distinction, but if you’ve got it, own it, right? Plus, as a collection this is completely awesome.

On to business. In this week’s Brakketology rock lives, Mythic’s free-to-play designers ruin beloved franchises, Enemy Within gets some hands-on time, there’s more Xbox One/PS4 comparing and contrasting, and Star Citizen is the game that refuses to take “no” for an answer.

Rock and Roll Will Never Die. I was as big a Guitar Hero (1/2)/Rock Band stalwart as anybody, but despite a recent resurgence at said Halloween party this past weekend, the fad has ebbed and now my collection of plastic instruments –instruments that in no way replicate the experience of playing music– sit in my basement awaiting the inevitable day that they’re moved out completely. There is something in me, though, something that yearns for the notion of game and actual guitar teaching to work well together. I never gave Rocksmith (or that other game I don’t recall) a serious look, but Rocksmith 2014 is now upon us and I’ll be damned if Sean Sands’ deep dive into it at GWJ doesn’t make me want to let slip a couple hundred bucks and dive in. Where is that pesky willpower when you need it?

Console War. FIGHT! If you’ve already taken up sides on the XBox One versus Playstation 4 tempest (in a teacup), this Edge Online article isn’t going to sway you, but it’s a nice even-handed look at the relative strengths and weaknesses of the two consoles (at the hardware level) with some cogent thought put into how messaging (and lack thereof) has played into the equation so far. Lots of good quotes from people at Microsoft and from developers.

“Of course [the company’s messaging problems] hurt in the short term,” says Ken Lobb, partner creative director at Microsoft Game Studios. ”We’re not blind, right? Did they hurt in the long run? We’re going to have to find out after we launch. We knew what we were going to do with indies. We knew what we were doing with Killer Instinct. But when someone comes in and asks a question about something we’ve decided we’re intentionally not going to talk about until a certain date, sometimes you get half answers. There’s no such thing as perfect PR.”

Well, unless you’re Sony. (I can’t believe I just typed that.) Speaking of the One, here’s a demo video of the dashboard. Although it is more frenetic than a coked-out squirrel, being the one guy who’s less interested in the games than the everything else it does, the responsiveness and multimedia capabilities are of interest to me.

It Is What We Thought it Was. Rich Stanton’s Eurogamer review of Ultima Forever went up back in September, but I’ve only just come across it. I spent roughly 10 minutes with this abomination of F2P horror and Ultima bastardization and never launched it again. I never wrote about it because, well, what can I authoritatively say about something after 10 minutes other than it clearly wasn’t for me. But Rich played more. He’s a braver man than me. And was likely paid to. I’m not sure there’s enough money in the world for an Ultima fan to have to endure this:

In the dungeons, and also in every town, are chests. Here’s where things really go south. Ultima Forever’s currency is keys. Bronze keys you get constantly, and 18 of these can be smooshed into six silver keys. Gold keys are the rarity. These get you the best loot from chests, open inventory slots, allow you to use a second ability at once, and pretty much everything else of any consequence. Did you get that? Basic things like a second spell slot are locked behind paywalls. And not only that – you have to pay to unlock these things separately for each character. Your key balance is shared across your account, but not what you buy. Another sneaky touch is that Ultima Forever sells silver key bundles starting at 69p, but the minimum purchase price for gold keys is ￡6.99.

How did this happen? The short version is, “who gives a damn.” I mean obviously Mythic is making games for other people. I’m not sure who those other people are, but there are surely two or three of them out there. The longer version is birthed in the attitude of EA and Mythic, given voice in a mid-October interview at Pocketgamer with Dungeon Keeper for iOS senior producer Jeff Skalski, who said this:

This is called violating Bill Harris’ first rule of public speaking: Don’t be a dick. I realize, Jeff, you probably weren’t trying to be a dick. You were probably overtired and maybe even having a bad day and the words probably sounded less offensive in your head than they do in an article. And yes, you’re very correct that you’re not just recreating those games. But you also have to understand that if you’re putting the name on it, you are supposed to be recreating the spirit of those experiences. Everyone and their brother knows stuff has to change when you start designing for mobile. But, see, that’s not what the problem is either. The problem is you’re designing for free-to-play and that is a model that ruins every decent gameplay concept it touches. So, you can act be as exasperated with Mythic’s critics as you like, it doesn’t change the fact that the F2P games almost universally suck and when you force that model on some very much-loved franchises it kills what people loved about them. That tends to piss people off. If you want the safety of obscurity that these types of games so richly deserve (to be obscure, that is), your bosses need to put a name on them that nobody cares about. Until that day, however, endure the criticism. It is earned.

Enemy Within Gets Buzzed. RPS posted a boatload of impressions based on hands-on time with XCOM: Enemy Within. Despite the section I’m about to quote, the tenor is very nearly universally positive (and it’s fantastic to see Mr. Meer’s voice back at RPS). But then there’s this here bit I’m about to quote:

The game does feel a little cluttered now, in terms of the amount of things that need researching and building slow things down enormously – which wouldn’t be an issue if it wasn’t for the matter of keeping the XCOM project’s funding nations happy. With all my cash and efforts going into Mechs and gene-splicing, it’s much more tricky to raise the capital and staff needed to build more satellites and Interceptor kit. I had four nations back out in my second in-game month, which wasn’t because I’d fouled up any missions but because I couldn’t erect enough satellite dishes – which as you may remember also entails building enough relays and power generators and lifts and excavations – in time to offest their rising panic from the terror missions I wasn’t able to do. Still, it is feasible enough to get by, but my point is that all the new stuff – colourful and varied and silly and strategic – both steals focus from and really shows up weaknesses in the base-management aspect of XCOM.

This is exactly the kind of thing I’m worried about. Balancing base funding and mission selection with the state of nations and their terror level was already a rather frustrating experience. It’s good in that it forces you to make difficult decisions, but it also feels rather plastic and punitive after awhile. Anything that makes resource allocation at this level of the game more difficult or punitive, without re-balancing the whole darned thing, strikes me as a particularly bad move.

Sidenote: The PA Report preview of the game notes that your soldiers can also earn medals based on unique combat actions. That, combined with the fact that you can rename them whatever you want, could be pretty cool.

Ever More Star Citizen Hype. They just passed an absurd $25 million in funding. There’s a new trailer. Despite the focus on online gameplay (which I keep having to remind myself I don’t give a fig about), this is getting harder and harder to resist. I don’t want to give them my money yet. I told myself I would wait for the final product. Resistance failing.

You’re Like a Child That Wanders into a Room. Finally, if you have no frame of reference for The Big Lebowski portion of this post, I give you this (NSFW: language):

One of the all-time great movies. And if you disagree, well, that’s just, like, your opinion, man.