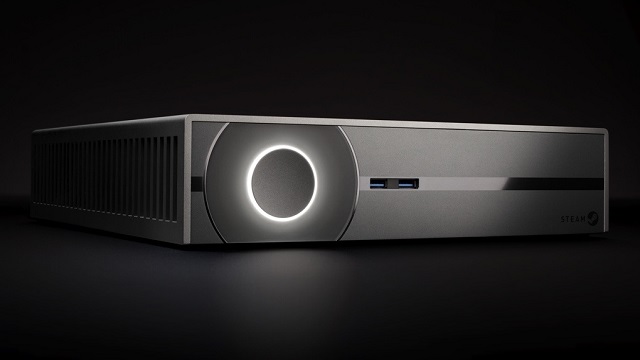 I was innocently strolling through my Feedly feeds a couple days ago, window shopping for things that looked interesting –things that would justify my desire to not have to, you know, be productive– when I ran across a reference to Vale having taken the wraps off their internally-developed Steam box. And then another. And then another. These are, of course, signs that an embargo just lifted.

I can name the number of times I’ve been invited to go behind the scenes to get an early look at something and then write free PR about it. It was always a fun experience just because you got to actually see stuff that only a small group is privileged to see and you got to meet people in the business (almost universally great people) that you would never ever get to meet in any other situation. Getting to sit down and have a casual conversation with someone like Fred Wester (Paradox Sofware) or a Mike Laidlaw (Bioware)? That’s awesome. Getting home and realizing you now have to try and write something unique about an experience that was exactly the same for a dozen other people who saw the same thing and are also about to write about it? Blech. Waking up and seeing them all online at the same time and then coming across the one or two utterly brilliant iterations that aren’t yours and make you feel bad about yourself as a writer? Vomit.

This is all to say that while I miss getting to have some of those experiences, I absolutely do not miss the sheer pointlessness of the work involved. It’s much better to look from afar and call attention to the stuff worthy of your attention. Which I’ll do right now…

All hands on Steam’s box. (Yes, I’m ashamed of myself for typing that.) Of the 90 kajillion pieces on the SteamBox, Sean Hollister’s write-up at The Verge deserves your lov’n eyeballs. In particular, it’s got some fascinating details on the evolution of the controller:

Originally, Valve wanted to revolutionize PC input, but it soon realized it needed to focus on a much more fundamental goal: simply getting the library of existing Steam games to work with a new controller. To do that, the company needed a way to make many PC gaming functions possible on a controller without the 104 keys a keyboard affords. Early on, the team decided to go with a touchscreen that could virtualize those keys instead of adding more buttons. “For all of Valve’s existence, we’ve been a software company, and we wanted as much as possible to have control over the input experience through software,” Coomer explains.

Then, the team decided they wanted the same kind of control over the trackball… but that proved impossible. “You can’t ship a software update to change the diameter of the ball or the mass or anything.”

From there, design evolved organically. The trackball made way for a trackpad, which could be programmed not just to emulate a mouse, but also support gesture control. One trackpad became two (and two became a giant touch surface before Valve came to its senses). Valve added tiny solenoid actuators to provide haptic feedback. The entire shape of the controller went concave so the fleshy base of a user’s thumbs wouldn’t interfere with the touchpads.

That’s a huge chunk of text, more than I’m usually comfortable quoting, but there’s a ton more at the link.

And while we’re on a Steam info-orgy, there’s evidence online to suggest that they may be working on allowing Steam to function indefinitely offline, instead of just for a couple weeks. That’d be nice… if it ever actually happens.

Those other consoles. Before Valve released everyone and their brother to write everything they wanted them to about SteamBox, the issue of the day had been all about the PS4 and Xbox One’s ability to work as media servers. Sony took the first lump when they put out their FAQ, which mostly listed things the console can’t do; things they’d somehow managed to not talk about yet. This was entirely predictable. Still, the lack of DNLA support (for streaming audio/video from a networked PC) was shocking, given that the PS3 has it and its one of the console’s more redeeming features. Ben Kuchera has been killing them over it at Penny Arcade Report, culminating in this post about why having easy access to your music should matter to gamers:

Both the PlayStation 3 and Xbox 360 used compatibility with your existing media as a selling point, and offered a variety of ways to use that content or to bring it into your gaming experience.

This is a hell of a thing to lose, and if a multiplatform release comes out that supports custom playlists on one console but not the other, that’s a serious selling point for many gamers. You can also forget about games like Audiosurf 2 that can use your own music; you’ll need to either pay for Sony’s proprietary solution or not use that feature if such games ever come to the PlayStation 4. That’s a massive bummer.

Right on cue, Microsoft comes out and says, “Hey, we love that DNLA stuff.” That sound you’re not hearing is absolutely everybody feeling irked at Sony, but not changing their PS4 pre-order.

SteamBox is looking better and better.

Drifting with the tides. The Torment team has posted their latest project update, in which they discuss the game’s alignment system: Tides. If you’re a backer or prospective buyer, this is worth digging into. It’s not so much a morality system, bur rather a representation of how your view of the world affects your actions:

Rather than focus on moral axes, the Tides look at a person’s legacy, at what they’re remembered for. They are not something people consciously strive for; very few individuals even know they exist. They are more like an invisible force (think magnetism or gravity) driven by people’s actions.

There are five Tides, and I want to walk you through each of them and then talk a little about how they’re used in the game. As you read, remember that the Tides do not care about motives or morality. Each Tide is embodied by heroes, villains, and folks just trying to do their best. The motivations of these people rarely matter; the Tides describe the legacies they leave behind. The Tides are pushed and pulled by action, not motivation.

There’s plenty more, where they detail each of the tides and how they’ll represent in the game. Very cool stuff.

It’s a dungeon, but on your desktop. A couple years ago at the E3 iteration of IndyCade, I got a look at a little dungeon-crawling RPG roguelike by the name of Desktop Dungeons. It had a playable “alpha” that I proceeded to skip in favor of holding out for the final game. I never heard about it again. Until this week. It’s freshly overhauled and it’s out tomorrow. The promo video (below) is all goofy fun and show very little, but if my memory is any indication, it’s worth taking a flyer on.

Adventures. In spaaaaaaaaaace! If you miss the old the Sierra Quest style adventures and want a little more isometric scifi horror in your life, check out the Kickstarter for Stasis. It looks groovy and it has a proof-of-concept demo you can check out. (I haven’t yet.)

Speaking of all things Kickstarter, Joystiq is doing a neat little feature, called Crowdfund Bookie, where they’re tracking the progress of various crowdfounded games. It’s way, way cooler than the shortlived piece I used to write here. It even has charts and graphs! (RimWorld absolutely killed their goal.)

Fear the mowhawk. Soren Johnson, he of Civilization IV fame, has built himself a new home (with a little help from Stardock). Good luck, Soren! I know you’re all about the RTS with your new project, and it sounds awesome, but maybe you’ll make me another turn-based game someday? Also, I could use a decent reliever in the OOTP league. I’ll trade you a starter for one if you also throw in the best prospect you have. Call me!