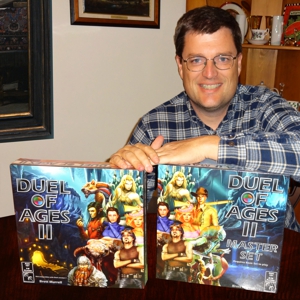 I made it abundantly clear, I hope, that I absolutely love Duel of Ages II in my recent review. I think DOAII is a brilliant game that manages to get at some very elemental concepts of play that reach all the way back to schoolyard games like cops and robbers while also creating a vast, “anything can happen” framework for players to create narrative. The designer, Brett Murrell, has been working on Duel of Ages for over a decade at this point, first releasing the game and a series of expansions back in 2003. The new edition arrives at a very different time in the boardgaming hobby, and at a time when I think it may just be the game that we need to cut through the crap and get back to old fashioned fun.

Mr. Murrell was kind enough to offer his thoughts up about DOAII and design in an interview, so over the course of the next two Cracked LCDs I’ll be presenting the results of this conversation that we held over email . I think Mr. Murrell has some interesting things to say and I hope you’ll enjoy his insights.

When Duel of Ages first released back in 2003, it was an odd time for an old school design with lots of stat-check dice rolling and hex-and-counter presentation. When I played the original game back then- which was around the time that I was first playing things like Game of Thrones, Age of Mythology, War of the Ring, and Heroscape-it didn’t register with me or my friends at all, although a certain cult developed around the game elsewhere. It also felt anomalous at a time when Puerto Rico was still held in many circles as the pinnacle of game design. Why is Duel of Ages back for a new edition in 2013, and an even better question is why do you think it’s still relevant given how much has changed in design paradigms and concepts?

Design – of anything – has one rule: use the best mechanisms for the targeted purpose. End of rule. There are no “best if used by” stamps on design mechanisms.

I totally agree, and to be clear I’m not using “old school” as a pejorative even though I think that the time, there was a pretty widespread agreement among hobbyists that the whole post- German games milieu was sort of the “new gaming” whereas the older Avalon Hill style titles, Games Workshop adventure games and so forth were old fashioned. It’s kind of ironic, I think, that those “old school” games in many ways have retained their relevancy long past Puerto Rico’s apparent expiration date.

Games like Puerto Rico are great designs for their target purpose – entertaining mathematically-minded adults whose primary goal in game play is victory. And that is the problem – not with Puerto Rico, but with the “many circles” who think of/promote these kinds of games or any game as THE pinnacle of game design. Tabletop gaming is a big universe. Calling one tabletop game as THE pinnacle is like declaring one of Michael Jackson’s hats as THE pinnacle of clothing design head to toe. Might be the greatest hat ever, but as a shoe it would suck wind. One design definitely does not fit the universe.

That’s a really great way of phrasing the appeal of the post-Puerto Rico Eurogame mentality. I had a somewhat hilarious conversation with a French guy and Arkham Horror designer Richard Launius sometime around 2004 or 2005 where we were talking about Puerto Rico and similar titles. Launius commented that he didn’t like stupid themes like counting bicycles or filling ketchup bottles. The French guy said (paraphrasing) “where is zee game in these? There is only mechanics.” And I think that at the time, back when DOA first appeared, it was almost like that was what a lot of people wanted out of hobby games, that sort of ultimate sense of balance and precision, clockwork mechanics at the expense of meaningful theme. And DOA felt like it was at cross purposes with that zeitgeist. Even today, the wildness and sheer humanity of this game seems in opposition to the almost fascistic over-valuation placed on balance, mechanics and process.

Zeitgeist! You’re pushing the right buttons. What a cancerous term as abused by zeitgeisters, and thank you for recognizing the opposition to it in Duel of Ages II. That opposition is built into the very theme of the game – an array of universally acknowledged Great Humans and others that demonstrate the traits that make humans what they are as individuals, for better or worse.

— Entertaining imaginative tweens and older whose primary goal is the experience

The success – and relevance — of Duel of Ages II lies in its ability to meld these two very different purposes.

I really like that you are specifically targeting younger gamers and not just middle-aged hobbyists- I think that’s something that has been far too often neglected in gaming and there again, this was something you really saw back ten years ago. It was when we really had all of the “scowling European authority figure” games, with lots of esoteric subject matter that would have no appeal to a modern “tween”. DOA strikes me as a game that would have substantial appeal to a kid raised on video games, literature, and history. But yes, I do think you’re hitting the older game player mindset as well with the depth of tactics and possibilities.

There are a lot of younger gamers that play computer games with sophisticated and complex rules and strategies and a wealth of information that must be tracked by the player – League of Legends, Guild Wars 2, Total War, Civ V. Not everyone is playing Angry Birds. These gamers have little trouble picking up a game like Duel of Ages II, especially if someone teaches them – like, say, a parent. I and my playtesters never have trouble finding new players because we just bring it out with the family kids or the youth groups. Duel of Ages II gets a super-high fan rate in that demographic.

Regardless, I think games targeted at tweens and younger audience – imaginative games – naturally flow into older audiences as well when done right. It’s the same for the Worldspanner books like the Spire Mystery Series. Make something that will challenge the imagination and wits of the young, and you’ll also get the many older players and readers that managed to hold on to that from their youth

When you first released DOA it was divided between a core set and a number of expansions (was it seven?), the new edition is a Core Set and a comparatively expensive Master Set. Thinking it over, I really like how you’ve released the products- you give more than enough of a taste in the Core, and then offer everything else in a single package for those that want to do the deep dive.

The original Duel of Ages sold a very high percentage of expansions, and buyers usually bought all of the expansions at once. Since multiple boxes costs a lot more money, we cut significant cost by combining the many expansions into just one. The version 2 Basic Set is a combination of Sets 1 and 2 from the first version. This is a much better mix, making the Basic Set a fully-powered game with a very long life span even without the Master Set.

It really is quite a package, there’s a tremendous value in just that basic set. When I first got the copy you sent me, I thought about just opening the base game and seeing how much play I would get out of it before cracking into the Master. But I just couldn’t resist. It’s the kind of game you naturally want more of. What was taken out of the game and what did you add?

Very few components were removed from the game compared to the first version. A lot was added – 32 characters, 48 henchmen, 70 treasures, 80 new Guardians and 104 Encounters. But even with the additions, the game came in $45 less than the original full series, mainly due to the two boxes rather than eight.

The most significant reduction was the streamlining of the rules – 6,000 words, or a third of the rules set. Version 2 allowed me to kill some sacred cows and prune heavily without harming the feel of the game.

I definitely think this rule set reads a lot better than the first edition. Something I think that really defines modern rules writing is a more editorial, direct style- which isn’t always easy to achieve. You want to write everything in there, cover every eventuality, but sometimes the better rules are those that give the player enough to be able to make good judgments.

Rules are extremely difficult to get right. You get very a limited window out of first-time playtesters and proofers, and you have to deal with global issues like second language readers. That is why an electronic living version is important. In DoA’s case, we also have a Compendium electronic version that formats the rules in a reference format rather than a progressive tutorial format. Both are important.

Your comments on not trying to cover every case are dead on. It is better to have a clarifications document than to bloat the rules with issues that most players will never see. Even the Catan rules set has seen the wisdom in that, giving a very short rulebook paired with a lengthy explanations document.

Are you seeing most of your sales of the new edition through direct sales or retail distribution?

It is nearly impossible for a truly small press, non-Kickstarter game like DoA II to pick up major distributors. Duel of Ages did have a history, however, and we picked up more distributors than we expected, especially internationally. We have been very surprised by the international response. Stores really don’t do small press very well, so we expect direct sales to be our bread and butter in the long run. It’s a mail-order world.

There it is, Kickstarter. Sign o’ the times and all that. Everybody is Kickstartering something, which as my readers probably know by now is a trend that I think is quite negative. I really appreciate that you have enough faith to back your product without up-front money, but did you consider Kickstarter at all to release the new edition?

I love Kickstarter. Kickstarter is competitive private-enterprise, and that’s where innovation comes from. That being said, Kickstarter does not fit my personality. I don’t like borrowing other people’s stuff, and with all of the challenges of production, I didn’t want a big hype campaign ending in a failed production run. I couldn’t think of a worse nightmare. Since I didn’t need funding to make DoA II happen, I chose not to use Kickstarter.

To be continued next week, but in the meantime, Mr. Murrell has agreed to make himself available for any follow-up questions, conversations, criticisms, or comments either here at Nohighscores.com or in the front page talkback for my weekly Barnestorming post at FortressAT.com. I get a sense that he has a lot more to say, so don’t be shy!