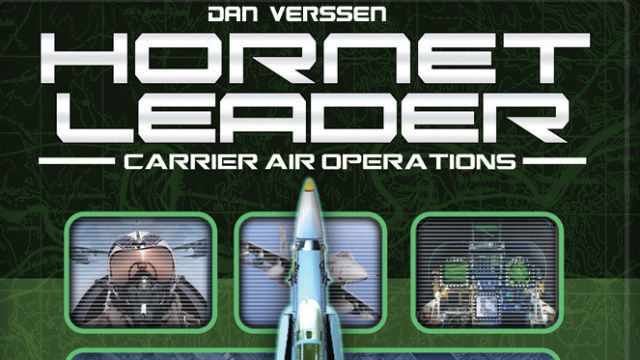 When my children were small and I didn’t get out much I played a lot of solitaire board games, and I decided that I didn’t like solitaire board games all that much. It’s hard to see what they give you that a strategy video game doesn’t, except lots of annoying overhead. There was, however, one exception: Vietnam air-war game Phantom Leader.

It’s part of a whole series of related air combat games from Dan Verssen Games. Hornet Leader is one of the more recent and critically lauded entries, and after my experiences with Phantom Leader I was pretty excited to try it out.

The core of all the games is a strangely magical piece of engineering which takes in raw game mechanics and outputs the illusion of military command. It’s hard to overstate how powerful this effect is. I’ve played dozens of wargames, from semi-abstract card driven titles to complex conflict simulations. Many of them were great games, and many were full of historical insight but virtually none of them evoke the sensation of being in charge like the Leader Games do.

You’re tasked with selecting a target card from a limited selection, assessing its location and defences and then arming a squadron of planes accordingly. This is no easy task. You’ll have chosen a roster of pilots for your campaign, all with different planes and abilities. As they fly missions, they’ll accumulate stress and even be lost or killed in action. Trying to make sure you’ve got the right people available at the right time is like juggling red-hot knives.

Usually you’ll get good intelligence on the missile installations and bandits defending the target, but not always. Either way you’ve got to load your chosen pilots with a mixture of air-to-air and air-to-ground armaments that you think, hope, pray, will be enough to blast through the enemy with minimal damage to your own pilots and leave enough munitions to demolish the target and fulfill your mission before heading home.

Then your pilots take off, engines roaring, smearing the horizon with heat-haze as they climb toward the objective, their all-too human voices crackling across your headphones. They’ve gone: you wound the clockwork and set it in motion, and the control you exert now is limited. You lick dry lips. You chose these men, picked their mission, armed their planes. Time and again you’ve asked them to put their lives on the line for your country. For you. If the mission fails, if they die, it’s your responsibility.

Then you remember you’re just playing a board game.

So over target you can move your planes and pick what they’re going to fire at but the sense of control is mostly illusory. If you want to succeed at Hornet Leader you’ll need to learn to plan well, to know who’s moving where and taking down what on a turn by turn basis.

Sometimes, often, things don’t go to plan. The percentages you’re playing with the dice don’t come up and either you dish out less pain or take more yourself than you were expecting. Then its frantic damage limitation time with the tools the game puts at your disposal – choosing a pilot to suppress an enemy rather taking out for instance – and salvaging what you can.

There’s no let up in the tension even when you’re homeward bound. The game hits your with random events for the flight out, over target and the journey back. There’s little like the blinking disbelief you feel when you’ve emptied all your sidewinders into bandits over the target, completed the objective by the skin of your teeth only to hit a squadron of MiGs on the way home and no munitions left to tackle them. War isn’t fair.

The one thing I didn’t much like about Phantom Leader was that most of the targets you were attacking were just faceless numbers. A bridge wasn’t really all that different from a factory. Hornet Leader improves vastly on this by assigning targets any number of traits from an impressive list. The biggest game-changer is “Improvement”, which means the target stays in play and gives a bonus to the enemy forces until its destroyed. Target selection with several of these in play is an exercise in desperation.

So, mechanically, Hornet Leader is an improvement over its predecessor. But for me there’s a small fly in the ointment. I like my historical wargames to be historical, to feel even for a fleeting moment that I’m re-treading real events that have already happened. All the campaigns you could pick in Phantom Leader fit that category. But in Hornet Leader only two do: Libya in 1984 and Iraq in 1991. The other campaigns are based on hypothetical conflicts. For me, you might as well make up a pure fantasy scenario with monsters instead. 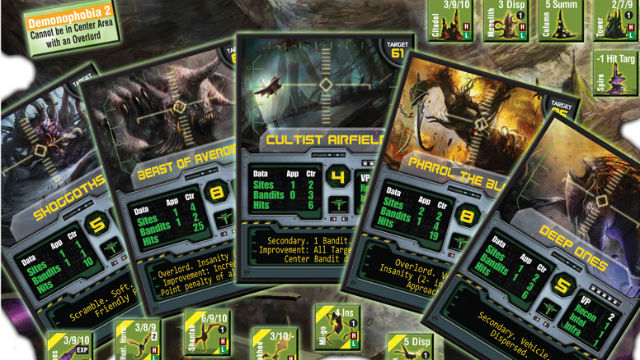 Sometimes you read about something and the concept just blows you away. How can no-one have thought of this before? And so it was when I first read about the idea of a Mythos expansion to a Leader game. Air strikes are a central feature of so many big monster movies from Kong to Cloverfield. Why not Cthulhu instead?

Why not indeed. And so here we are. The standard bandits and defensive installations from the base game are mixed with a number of occult constructs which do things like teleport your pilots around or summon freakish creatures to their aid. The target deck is replaced with a variety of nightmare dimensions, occult rifts and colossal monsters all furnished with brilliantly evocative art.

The poor squishy humans you send out against the waves of horror can now go gradually insane through repeated exposure to the impossible. To balance it out they get a small selection of extra munitions to take out the targets including remote drones and, in delightfully predictable fashion, nuclear bombs.

As you might expect from something devoted to modelling madness and chaos, much of the tight planning that’s such a core part of the original experience goes out the window in the expansion. Oh, you can try. But when your approach areas get chosen randomly, events like non-Euclidian Geometry occur and force all your sane pilots to move at the whim of a dice and colossal horrors from the primordial age can smash planes out of the sky with a flick of a tentacle it’s hardly going to be wall to wall strategy.

To compensate the game still gives you the same extraordinary sensation of being there, except there is now right in the middle of some of the most brilliantly imaginative horror ever conceived. Ever bemoaned the lack of good Cthulhu Mythos movies? Now you can make your own.

The only real complaint is a lack of big-name monsters. The small fry mostly bear names familiar to the most cursory student of the Mythos: Hunting Horrors, Byakhee, Mi-Go. But the boss monsters that form the core of the target deck are, with the exception of Chaugnar Faugn, little known. I’d much rather be flying missions against Cthulhu or Azathoth than Pharol or The Beast In The Pit. I imagine Copyright issues are to blame, but it’s only a small loss.

This is a great game, and a great expansion for anyone with even a passing interest in solo board games. And even if the thought of playing alone fills you with dread, the games actually play pretty well co-cooperatively as well. I know, because I’ve tried. Good job too: it helps a lot against the horrors of war to have your buddies at your side. Not to mention the faceless Gods of the Mythos.