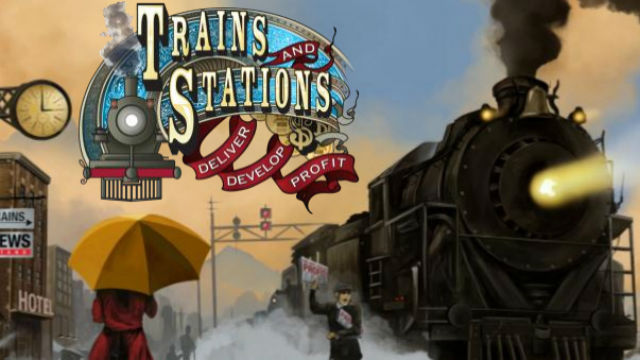 I’ve always loved interaction in games. I’d bet that most gamers do, really, it’s just that those who’ve chosen to embrace the bloodless, over-balanced mechanical model that runs screaming as far from zero-sum games as it possibly can think that logic is more important than interaction. But there is, thankfully, an alternative. Instead of having players taking chunks out of each other, you can instead encourage them to co-operate for mutual gain.

My suspicion is that this what Trains and Stations sets out to do for the light family gaming crowd. Clearly influenced by age-old classic Poker Dice, the game sees you roll a handful of beautifully marbled custom dice, picking what they want to keep and rolling the others again. Except that, in a nod to modern sensibilities of choice and strategy you can actually keep certain dice from turn to turn if you find you didn’t roll the combination you were looking for and you have to pay for each re-roll.

The aim is to build mines, ranches and the like across an abstract map of America, and to fill in the interconnecting routes with trains. To build a building you need three matching dice of the same type. Train dice can be used alone: you take all your train results and place the dice on the map in the spaces between the cities. The final dice face is more coins that you can spend on re-rolls.

But here’s the kicker: each player is supposed to roll five dice from a pool of eight. But as train results come up and the dice go on the map, the pool shrinks until you have less than five and can’t roll them all. To reclaim your dice from the board requires the route to be completed and scored, whereupon all of the dice in the scored route go back to their owners, who get some points.

But all the routes are at least three spaces long, making even the smallest ones tough to score on your own without impacting your dice pool. Ideally, you’ll need help from other interested parties. This is the carrot the game hangs before you as a nudge to co-operate with one another and, of course, as soon as your start favouring some parties over others with your deals, you get all the fun of interaction in an otherwise tame game.

As further incentive each player has certain route cards which score bonus points for connecting more distant cities. It doesn’t matter who actually completes the route, as long as the connection is made the person with the card scores the points. Which can lead to some delightfully mean moments where you manipulate third parties into doing your dirty work for you, before beaming like a Cheshire cat and flipping your bonus card. 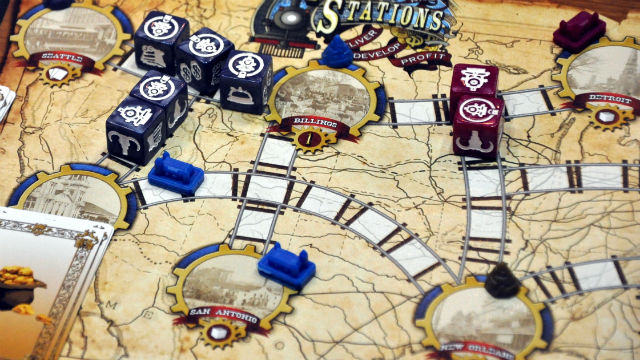 At least that’s how it’s supposed to work. And sometimes that’s how it does work. The problem with games of this nature, where the need to get down and dirty with the other players is implied rather than being spelled out mechanically, is that some players get it and some don’t. The poster child for this style, Cosmic Encounter, goes to considerable lengths to push players toward negotiating with one another, to the point of have specific roles and rewards in every combat for attacker, defender and allies of each. But even then I’ve played it with numerous groups of gamers who failed to spark even that lengthy touchpaper, because either all the players pitch in or it doesn’t work. A single refusenik can derail the whole game.

Trains and Stations doesn’t go to such lengths, instead gently nudging the player with possibilities and a typical rules paragraph about negotiation which spells out, rather forlornly, that deals don’t have to be binding. It’s pathetic that some gamers need reminding, but they clearly do. And without clear guidance from the mechanics, more players won’t quite grasp the delicate intricacies of dealmaking that go into the game, and more sessions fall flat.

That might be okay if the game was mechanically tight, if there was lots of excitement of strategy to fall back on if the hive mind around the board fails to gel, but there isn’t. Rolling the dice is fun, but the excitement is tempered in one direction by the ever-present specter of choice about re-rolls and keeping dice between turns, and in the other by the hellish ghost of punishment should you be unlucky enough to roll three locked trains, resulting in both a victory point penalty and no further re-rolls. It seems unnecessarily severe.

Yet there’s still too much randomness in the game to satisfy those looking for a properly strategic experience. Then there’s the fact the rules around the buildings and the resources they generate seem overly complex. Get triples to build a building on a city, grab a matching resource for each route that passes through. But then halfway through the game the resources each building makes change, with what generating which depending on the order that old ones run out, and you can then trade in old cards for new if you want. It’s not really hard to understand, but it’s a lot of work for what amount to a few paltry bonus points for having a majority in a particular resource. Sometimes they can determine a winner, and those times are exciting. But mostly they’re just extra overhead.

Set against this is the fact that the game as a whole is quite easy to learn and play, not to mention quick. The hour play time listed on the box seems pretty accurate once you’ve got a sense of how it all flows. And it’s got some inventive concepts in it too. But while you can forgive a game a lot of flaws if it’s fast and fun, that’s rapidly becoming a crowded niche, and I don’t think Trains and Stations does enough to stand out from the crowd.

It’s not so much that it’s a bad game as one with a very limited audience. Ideally, I guess, you’d want a family group who game regularly and aren’t afraid to get stuck in to quick and dirty dealmaking. My Mum, it just so happens, fits that profile very well and she really enjoyed the game. If that sounds like it could be you, it’s probably worth your time to check this out. If not, you should probably go back to King of Tokyo.