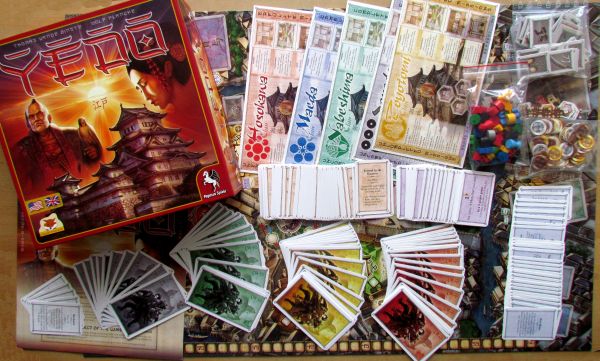 More than few people online and out in the real world complained that last year’s smash hit Lords of Waterdeep was lacking. Lacking depth, lacking substance, lacking narrative, lacking theme, whatever. Frankly, I think these folks are lacking good taste but boy howdy do I have a game on the table for them. If you’re one of these people that liked the core worker placement gameplay- driven by quest cards and featuring more direct interaction and interference than typical of the genre- then Pandasaurus’ Yedo ought to be on your Christmas list this year. The game plays very much like a meatier, richer, and more complicated version of Waterdeep in Feudal Japanese drag but it wouldn’t quite be fair to call it an extrapolation or extension of that game’s concept because it very much marks its own territory in the worker placement genre. I’m not even sure if the designers of Yedo had ever played Waterdeep before working through Yedo’s development, but some notable parallels are definitely there.

Process is very similar, but as with all aspects of the game Yedo offers a lot more to consider at any given moment and very specifically focuses on long-term strategic planning and flexibility. This is supported by a sense of building power through judicious acquisitions of resources that affect the entire game. Players, representing clan elders in the 18th century city of Edo, plunk down servants in various districts to hire geishas, buy different types of weapons from a marketplace, order construction of buildings, take money from the Christian missionary church, engage in trade, and so forth. It’s really quite concrete, which may satisfy those who felt the locations and actions in Waterdeep were too abstract. Additionally, there is a preliminary auction phase where some of the assets that can be acquired through worker placement can be straight up purchased. There’s also a fun mechanic where the town watchmen wander around and arrest any of your servants engaged in suspicious dealings.

The point of all of this- again, like Waterdeep- is to fulfill mission cards that provide game-winning prestige points and sometimes a bonus or two upon completion. There are missions with flavor text describing assassinations, diplomatic engagements, warfare, and other typically feudal affairs. The catch is that there are four different stacks of these cards that together manage to create a game-long narrative that actually sort of hangs together more than expected from flavor text and icons. More significantly, the missions have a difficulty range with the greens being the easiest but offering the least reward and the blacks being the hardest, requiring more assets and better suited for the late game once players have acquired the various components required to assassinate the Shogun or whatever the case may be. This gives the game a natural sense of pace and it also offers players a definite sense of working toward larger goals.

Like Waterdeep (sorry), there are also take-that cards that players can play on each other, which adds some friction. There is open trading of resources, which is a touch that I absolutely love- especially when you suddenly realize you don’t need all of those Geishas or throwing stars for your next mission card. There are definite inter-player politics and moreso than in most worker placements games. There’s also turn-altering event cards that inject variability and volatility into the game. All of the above combines to make Yedo feel more narrative and descriptive than you might expect from what is effectively a hardcore optimization game. But make no mistake- despite the high quality storytelling and not-at-all superficial theming, this is a balls-out example of a modern, heavy Eurogame.

So far so good. Yedo is a very well designed, meticulous in its execution and excellently illustrated. It feels big and plays heavy. Weighing out opportunity costs, budgeting your very limited number of servants (whom also have to be in specific board positions to complete missions), deciding which auction to shoot for, and how to plan for the next several missions you’ll be trying to accomplish is a lot to take in especially for the first couple of learning games. It doesn’t help that the game is largely language independent, meaning that there are tons of Euroglyphics. The wide range of board spaces necessitates extensive description in the rulebook, which means you’d better just keep it open for the whole game. Just go ahead and expect that the first game is going to be a mess.

Here’s the weird thing. I think this game is really freaking good, but I find myself almost completely not interested in playing it. Part of it is that I’m not terribly crazy about Feudal Japan themes. Another part of it is that I think this is a game that would really benefit from playing with veteran players who really understand the range of possibilities that the actions and districts offer in concert with the mission cards. I think this game demands more commitment and attention than is usual for Eurogames, perhaps hearkening back more to games like Die Macher rather than Puerto Rico

No, I didn’t just compare this game to Die Macher. But my point is that to get the most out of this game, you’ve got to be willing to play it in a way that most Eurogames simply are not played these days. My disinterest partially comes from not really wanting to commit to it, despite its quality. I’m satisfied with Waterdeep for this style of game, and I just don’t see myself reaching for a three or four hour worker placement game when I’m happy enough with pushing around cubes color-coded to classes in a 90 minute game of Waterdeep. There again, there’s plenty of people out there who aren’t, and I think this is the ideal game for them. It really comes down to whether you want the filet or the 24 oz. Porterhouse.