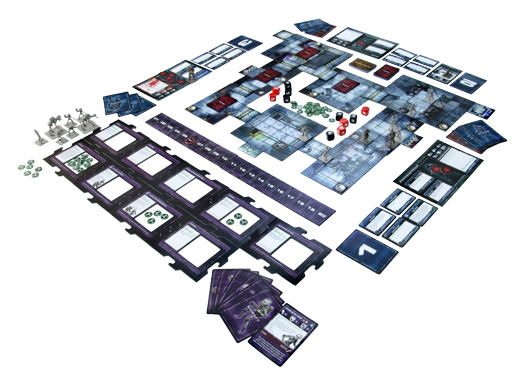 Level 7 [Omega Protocol], a new dungeon crawler from Privateer Press, is proof positive that a game doesn’t have to necessarily innovate or reinvent its genre to be a best-in-class example of it. But that’s not to say that this title do any innovating or reinventing of its own. There are a couple of really quite brilliant ideas that help to modernize a title that at its root really isn’t all that much different from some of the top names in the dungeon crawl/”Dudes in a Hall” genre.

The big negative is best addressed right up front, because you’re going to see it plastered on the box before you even crack the shrink. The bold-faced problem with this game is that the setting, artwork, atmosphere, and the fiction it’s all wrapped up in are shockingly generic. “Dull” would probably be a more charitable term, but the prevailing sense about the Level 7 concept is that it is wasted opportunity for Privateer Press to make a mark with a distinctive, unique setting. The company’s Warmachine and Hordes settings are compelling, and there are lots of great illustrations to support them. But Level 7 looks and feels completely uninspired, with some throwaway story about a subterranean government research facility overrun by aliens offering up an excuse to send in a team of commandos for some shoot-em-up fun.

Fortunately, the story is just about as meaningful and relevant to the overall quality of the product as what you might find in a 1990s-era FPS video game. Level 7 [Omega Protocol] is a solid design that weds classical sensibilities with some thoughtful modern mechanics, yielding a game that overcomes its apparent lack of personality or differentiation. It’s working in a tough genre, where stone classics like Space Hulk, Claustrophobia, and Heroquest rule the roost, so what is this game going to give you that those don’t for its $90 asking price?

Reading the rules, you might think “not a whole lot”. Most of the process and structure is standard fare for the genre. One player is an “Overseer”, and one to five others are the special forces “Disco Team” sent to run and gun through whichever mission you choose to set up out of eight included. As you might expect, there’s lots of maneuvering through hallways, rolling dice, opening doors, spawning monsters, occasional random events and other “Dudes in a Hallway” staples. Go flip a switch somewhere, turn on a console, kill monster X, make it to an exit, survive Y number of rounds. You get the picture.

But there are a couple of very important differences that I think really set this game apart, largely tied to the Overseer role. I typically do not like “everybody versus one guy” games because there tends to be an uncomfortable compromise where the antagonist player has to effectively decide whether to go all in and potentially just annihilate the hero players or to pull back and let the game mature so that everyone can have a fuller, more fun experience. Playing a game of Descent, for example, with a hardcore Overlord hellbent on a TPK really isn’t much fun, for example.

But Omega Protocol does two things that really make a difference. One is a concept that has its origins in games like Doom or Descent, where the antagonist player has to expend resources to perform certain functions. This is combined in Omega Protocol with a system not unlike the mechanic in Claustrophobia where the bad guy has a menu of options to choose from with specific costs and timing rules. Each mission requires the Overseer to set up a modular grid of abilities, each with a cutout bin. During the game, as players spend adrenaline points to perform their actions, they pay them to the Overseer. The Overseer spends these on his actions. But the catch is that these abilities- which include spawning alien figures- cool down at set intervals. So a really nasty ability might cost ten but cools down only one or two per turn. This is a great idea, and it makes the Overseer role more interesting.

I also really love that the Overseer is able to actually go for the throat without just punishing the party. When commandos lose all of their health, they don’t die right away. They’re downed and are heavily penalized but still in the fight- but fret not elimination fans, they can still bleed out and be killed. But ideally, you want to get someone in there to rush in and get them back into the game with a medkit. The concept is actually quite similar to what goes on in co-op video games like Gears of War or Left 4 Dead, and it works brilliantly. It creates unique tactical situations for the players and enables the Overseer to up the tension and drama without just knocking someone out of the game- or relying on some kind of gamey respawning or resurrection mechanic.

As for the commandos, there are some notable differences as to how Omega Protocol plays as well. Specializations and abilities aren’t really anything new in the genre, but I really like that you get to kit your commandos out with various abilities and weapons before each game. This lets the players fool around with different “builds”, working with different synergies and looking at the possible utility of a drone, gas grenades, or extra medkits.

The commandos also have to choose between three different “stances” at the beginning of each turn, which effectively sets their movement rate as well as attack and defense values. This is a neat bit of detail that makes each commando class play differently and it adds a nice touch of atmosphere- go in heavy and ready to fight, or more cautiously in case a room card spawns a bunch of aliens right on top of you?

The adrenaline system, mentioned above, is also a really smart piece of design. The more the commandos do, the more the overseer gets to do. There’s an interesting psychological tension the game achieves with this system. You know you need to run over there and open that door…but every adrenaline point you spend makes the game more dangerous.

I think there is enough different about this game to warrant attention over its peers- which include classics like Space Hulk and Heroquest- and I think it’s really quite a better game than other such as Descent or Mutant Chronicles: Siege of the Citadel. It’s one of those designs that feels very studied. You get a sense that the designer (Will Schoonover) really loves this kind of game but had some ideas to improve on established successes. So it’s still easy to fault the game for being yet another dungeon crawl and the generic setting and artwork certainly don’t help its case, but I think any fan of this particular genre is going to be quite impressed with the quality of the design.

One thought to “Cracked LCD- Level 7 [Omega Protocol] in Review”