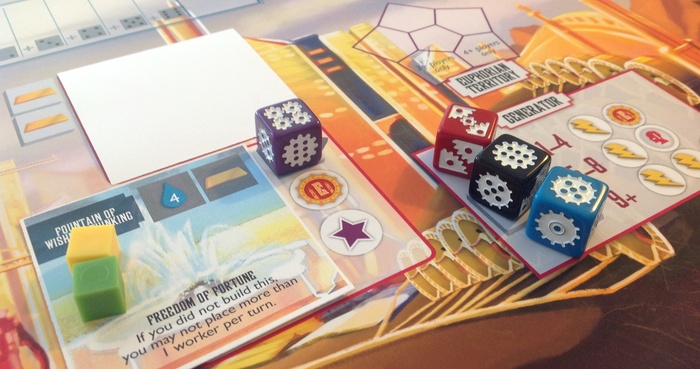 A common complaint about worker placement games is that they don’t really have much to say in terms of expressing a theme or storyline. Euphoria, a new title from Stonemeier Games, is aiming to bring a little more narrative and a sense of world-building to the genre and by jingo, it mostly succeeds at contextualizing fairly standard production and conversion mechanics into a unique setting. The game is sub-titled “build a better dystopia”, and that is just a teaser as to the surprisingly effective science fiction story this game attempts to tell. This may be the first worker placement game where the worker pieces actually carry subtextual meaning.

It’s classic dystopian fiction in the Metropolis, Farenheit 451 or Hunger Games vein- a far-future city of industrial perfection, industry and totalitarian control of the worker. Each player starts with two workers, indicated by custom D6s. You can “clone” two more at the Worker Tanks during the game, using power or water resources. The reason that they are depicted by dice is that each worker’s overall knowledge and awareness of the situation in Euphoria is symbolized by the value of the die. The reason for this is that the smarter your workers are, the more likely your workforce is a flight risk. Every time workers come off the board, they are rolled and the aggregate total of your workers’ knowledge is compared against a die roll modifier. If you hit 16 or better, your “smartest” worker leaves.

This is a very, very cool way to bring in some storytelling conventions common to dystopian fiction. But it doesn’t stop there. The people of Euphoria are organized into four factions that live in segregated areas keyed to what resources and commodities they are responsible for producing, and doing things that benefit or utilize those factions’ areas increases markers on an allegiance track. Special abilities may be earned, and eventually players get rewarded for having recruits- cards depicting specific characters with unique powers- of factions that max out their allegiance. And then there are public buildings, that all allude to the Orwellian master-state that has all-but stamped out entertainment and leisure products, including board games. The “artifacts” you might find while helping a faction excavate one of the tunnels from one faction’s zone to another are things like baseball bats, a copy of A Wrinkle in Time, and deflated balloons.

And then there are the Icarites, an apparently mysterious and mystical faction that lives in airships over the city, harvesting an intoxicating atmospheric gas known as Bliss. When you return your workers from the board, you can give them either Food or Bliss to keep your morale (read- artifact card hand size) from lowering.  It’s your choice, dinner or drugs. There’s several very specific examples of what your resources are actually doing, like how raising a new worker with power “shocks” the worker and lowers your Intelligence die roll modifier while using water “refreshes” them and increases morale. Every player also gets a moral dilemma card that they can complete once per game that allows them to choose to side with the State or with the workers.

I’m thoroughly impressed by how almost everything you do in the game has meaning beyond gathering cubes and turning cubes into victory points. I absolutely love one particular aspect of the game that completely subverts the usual “bonus building” mechanic. Players contribute resources to public buildings and when they are constructed, everyone that pitched in puts a star on the building. That’s the goal, to put ten stars representing “authority” onto the board through this and other means available in other areas. But the catch is that instead of opening up special abilities or functions, the buildings shut them down for anyone that does not have one of their stars on the building. So the game actually limits available functionality when they’re built. Of course, later on, players can buy their way into a star using sets of artifact cards or other resources but I love this idea of penalizing those who don’t contribute.

And that’s another way that this game tells its story effectively. This game gets that there is significance to being a faceless authority figure ordering units representing people to make, construct, produce, and otherwise toil. The moral dilemma cards seemed a little silly at first, but then I got the point of a card that asked me whether I wanted to give the balloons to a friend to help them escape or to rat them out so that a sniper can shoot them down. This game is asking an implicit question about what worker placement means. Setting the game in an explicitly totalitarian dystopia instead of a romanticized Feudal state or vague historical setting without a sense of accountability drives the point home.

Euphoria is a very different sort of worker placement game, if that is not abundantly clear. It’s not a resource grind, efficiencies exist but it’s not really about exploiting them. There are no conversion paths from raw materials (cubes) to VPs. It is much more about using the game to get these stars out, taking chances and weighing out advantages. But then you’re also trying to mitigate the effect of worker knowledge, trying to keep morale high so you can have a larger hand of artifacts to pay some of the costs in the game, and you’re also constantly concerned about those allegiance tracks since bumping one up may give other players points.

And that’s a very fine, subtle point about the game that really needs to be addressed. Almost everything done in the game does not strictly benefit a single player. Almost everything affects another player in some way. Putting workers in a resource collection affects the yield. You total up the knowledge of the workers and their congress while on the job may increase your Intelligence modifier. Digging the tunnels for each faction helps everyone when they reach the end and open up spaces that generate three resources from a neighboring zone. And those buildings are almost always community projects by necessity. Actual interaction is fairly limited, as is usual for worker placement games, but there is open trading of artifact cards and resources.

Euphoria is a nice surprise, all considered- an unexpectedly thoughtful, resonant Eurogame that actually succeeds at translating process to narrative. My only issue with it is that like many games of this class, it’s not something I can see playing for years to come. It’s a closed system with a few randomizers and a modicum of interaction, so you can get as many games as you want out of it but the overall experience will not necessarily generate particularly memorable sessions. That said, I think there’s more play in this box than there is with some of the other games in its class.

One thought to “Cracked LCD- Euphoria in Review”