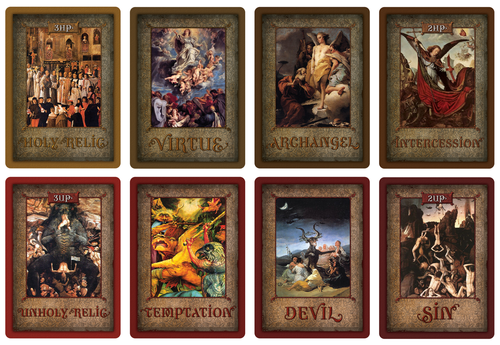 When I emailed Robert Burke, designer of Battle for Souls to shamelessly ask for a review copy, he responded that he had sold through what the Kickstarter campaign had allowed him to print but he was more than happy to comply. It seems that he had several game reviewers actually decline the opportunity to review the game because of its subject matter. Naturally, I wanted to review it because of the subject matter. And because any game that uses William Blake paintings has got to have something to recommend it.

Battle for Souls is a very medieval concept of the battle twixt heaven and hell. One player (or partnership) commands the angelic forces of Heavenly salvation, the other is in league with Satan and his demonic host. The battlefield is an array of three earthly souls each marked with a particular vice and virtue and the idea is that angels and demons influence their behaviors to shift them toward an eternity in either Heaven or Hell. This is all a fancy way of describing what is essentially another descendent of Knizia’s Schotten-Totten, what I like to call the “contested location” genre.

Like Schotten-Totten (or Battle Line, if you prefer), influence is determined by playing sets of cards that map roughly to Poker hands. Each player has a deck of cards that are color-coordinated to the vices and virtues and playing pairs, straights, full houses and such have varying effects on the earthbound soul that you are attempting to influence. Applying Holy points shifts a die’s value in Heaven’s favor, while applying Unholy points might subtract from Holy points, neutralize the die, and then put that character on the downbound train.

There are a couple of cool ideas coordinated with the simple area control mechanic. One is that players can actually spend the points that they’ve placed on characters as a resource to purchase Relics or Intercession cards. Relics generally have a couple of charges and affect various special abilities. Intercessions might confer a one-shot bonus or a surprise effect. Another is that when characters have at least four Holy or Unholy points on them, a player can play a “Reap” card to cause all three souls on the board to face their reckoning and trot off to their eternal reward- or punishment. But if you can manage to put more than six points on one, the soul transforms either into a Saint or an Archdemon. This allows the player to reveal another Archangel or Archdemon card that provides a Holy or Unholy point to a soul with a particular vice or virtue every turn.

What I like the most about Battle for Souls- other than the awesome and strangely under-utilized theme and the incredible artwork (it’s all real Art with a capital A- not cheeseball fantasy illustrations)- is that like any great two player card game there is plenty of subtle depth and sometimes surprising strategies. Juggling the Holy/Unholy points on the three cards makes for some interesting choices, and the constant threat of reaping means that piling points onto a card to try to get a new Archangel on the board might mean that Satan and his gang spends a Reap card just to stymie your plan. And souls that do not have at least four points on them during the Reaping go into purgatory- no one scores them unless a special card effect lets you rescue them from limbo. So it’s possible to block the other player from points by tipping the scale just enough. On top of all of that, you’ve got to constantly weigh the benefit of keeping points on a card or spending them for a random benefit.

And there’s a constant tension in the hand management- play now, or discard a few cards and hope to draw your way into a higher-value hand that may impart a more powerful effect? I like the use of Poker hands, even though it may seem anti-thematic. Using traditional card game grammar gives the game a classic feel, and it makes some of the more complicated effects of playing sets feel more accessible.

Battle for Souls supports one to four players. The solo game is a decent challenge and the team-based multiplayer is pretty much an uncomfortable bust as most team-based versions of two player games are. This is definitely a game best played with two, and like the great Kosmos two player games last decade it’s one that I think will have plenty of longevity with couples or regular gaming partners. It’s the right mix of quality gameplay, classic card game values, and compelling subject matter.

As for the subject matter, I found it quite interesting how easily the struggle to influence souls fit into this particular genre. It makes sense. No, you aren’t going to somehow feel like Michael or Asmodeus playing this game and I’m assuming that angels and demons don’t play Poker hands to get us to do good or evil. But it makes game sense. The mechanics work, and the conceptual theme of spiritual tug-of-war shines through.

Battle for Souls was quite a surprise. I did my usual scouting of rules and assets before requesting the review copy so I knew it wasn’t going to be a no-chance-in-hell dud, but I really didn’t expect the game to be quite so captivating. I don’t think this game is particularly innovative, although I appreciate how it plays with some of the conventions of its subgenre, and I don’t think it’s a game that is going to make Robert Burke a household name. However, I think the compelling subject matter and the rock-solid gameplay- not to mention the timeless artwork he’s chosen to illustrate the game- are more than enough to recommend this excellent title.