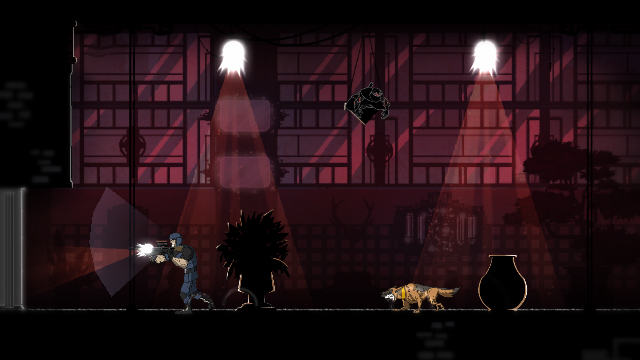 I picked this up as part of a Humble Bundle that contained two games I wanted to play; FTL and Fez. I’d never even heard of Mark of the Ninja, yet it’s become the most-played title in the little selection I secured.

It’s a stealth game and I’m not generally a fan of stealth games. My experience of them is creeping through dark corridors in first or third person, waiting an apparent age for a guard to wander over to an area where I think he can’t see or hear me, followed by a cautious move forward revealing he can, in fact see me and then my untimely demise. Repeating this semi-random process ad nauseum does not a fun game make.

But Mark of the Ninja is different. It’s simple shift of the action to a two dimensional platform perspective is a thing of genius, solving all these problems at a stroke. Now I can tell at a glance whether a guard can see me or not, or whether he’ll be able to hear an action I take. This is stealth by strategy and when I fail, I failed because I fucked up.

The result is a weird and compelling blend of puzzling, twitching and sandbox experimentation. Levels and your palette of actions are carefully designed so that there’s more than one solution to most problems. At the most basic level you can usually choose to either sneak past a guard or take him out.

In a more complex scenario you might blind a guard by blowing the light, throw down a trap for him to stumble into hoping his sudden and grisly death will panic his second comrade into accidentally shooting a third. There’s a lot of options in between these extremes too.

I ran through it in about seven hours total and mostly I thought it was novel and rather brilliant. But it started to pale just toward the end. Why?

A mediocre plot didn’t help. Ultimately I think the sandbox aspects of the game don’t work as well as they should because your goals are limited: it all still comes down to creeping past guards or killing them, no matter how many tools you have at your disposal for achieving those aims. But as a stealth game it’s an unparalleled experience.

4 thoughts to “Now Playing: Mark of the Ninja”