I received another one of AEG’s care packages late last year (delivered to the wrong address, as usual) and I’ve finally gotten around to playing through their most recent review copy bounty. For some reason, I was shorted Cheaty Mages which sucks because I was really looking forward to it, but beggar-critics can’t be choosers. So here are three capsule reviews of some recent AEG releases. 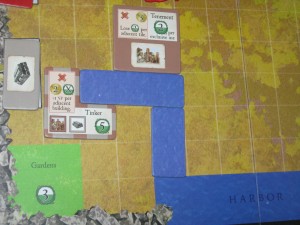 It’s practically impossible for me to not call this game “Banalis”, because it has got to be one of the most banal games I’ve played in recent memory. It’s another design, this time by Philipp DuBarry, that has been appropriated into AEG’s Tempest setting and like the previous titles in the set it’s a workmanlike, mostly unremarkable game with some familiar mechanics and a general lack of excitement. Players once again represent rival factions of the Tempest city-state, this time dredging canals through swamp lands to make connections between resources and production facilities that turn those raw materials into finished goods when they’re also connected to tenements, which provider workers. There are also special buildings that impart- you guessed it special abilities. Talk about old hat. The whole thing is driven by a 7 Wonders-style pick-and-pass card drafting mechanic.

It does play out something like a rail game on water, complete with player ownership of locks (stations, if you will) and tolls required to players using them. There is a sublimated element of cooperation, since players are mutually building the canal system but it’s mostly a tile-laying, point-scoring affair with moderate friction. It’s mercifully brief, so at least it has that going for it.

I dreaded playing this game more than once for review purposes. I almost felt like I had to apologize to my regular game group for bringing it out for a third round because it just wasn’t interesting to anyone. It isn’t that the game is badly designed- in fact, I think it’s a competently developed system but it’s at least ten years out of date. It reminds me of playing marginal Eurogames with mercantile themes in the early 2000s, titles like Kontor or Hansa that were coldly economical exercises with very little heart or passion. 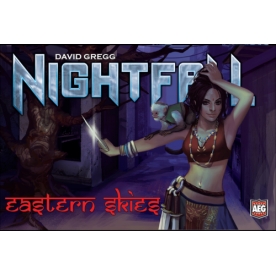 I was much more excited to play the new Nightfall expansion, Eastern Skies- mostly because this add-on moves the apocalyptic vampires versus werewolves action of the storyline to far east. It’s an unusual setting, allowing for all kinds of cool Chinese, Indian, Thai, and other Eastern flavors. You don’t often see traditional gothic horror tropes in these kinds of environs. Like the other Nightfall expansions, Eastern Skies is a standalone game that doesn’t require you to have any other Nightfall products.

I haven’t kept up with Nightfall, a game that I liked but didn’t feel particularly compelled to continue playing for long after the IOS version came out. So I wasn’t aware of some of the changes that have been made to the core system, but I found that I liked what was new in this set. The intricate core gameplay based around building chains of cards is the same but this time out there are cards that summon disposable ghouls into play for use as minions. There are also cards that have a new “link” ability, that basically provide an instant effect as soon as a card is played into a chain. This gives the process of playing cards into chains a little more oomph and increases the strategic value of some cards.

I liked the new set and I was glad to check in on Nightfall again, but I don’t think the cool setting and new mechanics are quite enough to lure me back into it. I still feel like the game is a little too complicated for its own good, and I’m not sure that I would reach for it over other deckbuilders that offer a more direct, immediate style of play. That said, Nightfall remains one of the more interesting and violent deckbuilding designs on the market. 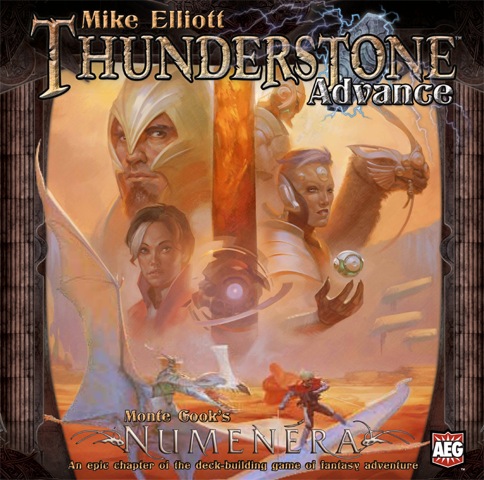 By far the gem of this lot- quite unexpectedly- is the new Thunderstone set. When I saw it in the package, I groaned a bit because even though I do like Thunderstone it’s quickly approaching Munchkin levels of proliferation. I also didn’t really know much about the Numenera setting, which is a new RPG from Monte Cook. So I sort of felt like I’d be going through the motions in reviewing this release, which is a completely standalone game requiring none of the other Thunderstone products.

It turns out the Numenera setting is very cool stuff, a Gene Wolfe-like far-future deal where ancient technologies are interpreted as magic and the monsters are more in tune with weird fantasy than high fantasy. The artwork- which I assume is mostly pulled from the RPG books- is quite nice and overall there’s a sense of character and atmosphere replacing Thunderstone’s amiable but bland genericism. More significantly, a couple of minor tweaks to the Thunderstone formula (building on the improvements made in the Advance edition) make this the best release in the line to date.

The card mix is really good, providing a solid blend of basic, intermediate and advanced card effects and there’s a host of interesting monsters to fight. But the main difference is that when players earn XP from smashing the weirdo creatures in the game, they draw thunderstone tokens out of a bag. These are color-coded to different one-shot effects. This imparts a fun resource element- do you want to spend a token for an extra point of light or a gold or do you want to save it for an upgrade? It’s a small thing, but it adds just a small layer of detail and choice that pays off quite a lot.

There are also large format cards that provide global effects. They can be pretty interesting and there again it’s a small addition that works and has a worthwhile payoff. Above these additions, this version of Thunderstone by far feels the cleanest, most refined and most carefully developed. I actually wouldn’t mind seeing more of Numenera explored via Thunderstone.