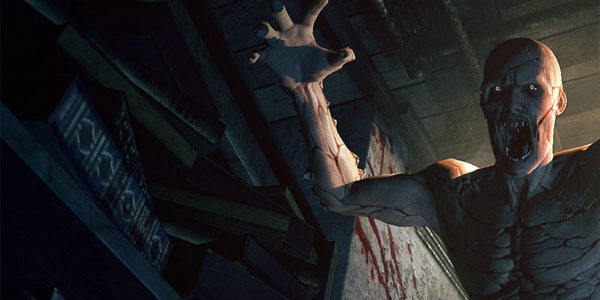 The game starts out quite promisingly- your character is going to investigate a creepy asylum called Mount Massive and you’re driving up to the front gate. You’ve got a camcorder with a night vision lens and limited battery life. You pull up, go through the front gate and look around. In a window, you see a figure walking by. Lights turn on and off. The atmosphere is thick, chilling and you get a palpable sense of “why the fuck am I going to go into this place?” but you’re compelled to explore. Some military vehicles parked out front aren’t a particularly comforting sight

Of course, the doors are locked so you’ve got to scale some scaffolding to get in through a window. The place is in disarray. Graphics are really good, if not quite up to the vaunted promises of “next gen”. You stumble around for a bit, finding some documents that tell the game’s story. You catch glimpses of someone or something walking around. Your character reveals that he is, in fact, just another horror movie idiot when he sees a busted-out ventilation shaft with a puddle of blood under it. I don’t know about you, but I don’t see something like that and think “hey, I should climb up into that.”

But the creep-out is still working at that point, and it looks like Red Barrels are doing something quite interesting- a horror game about exploration and suspense rather than shotgunning zombies or solving silly puzzles. There’s a strong sense of place- it’s not as characteristic as the house from the first Resident Evil and it’s not quite as balls-to-the-wall terrifying as some of the locations from the original Silent Hill, but Mount Massive feels like it’s becoming a character- a character that doesn’t like you. You open its doors slowly, always sure that something is about to jump out at you.

And then something does, and the game totally blows it. All of the delightful dread, suspense and tension are squandered in a silly scene of over-the-top gruesomeness that is sure to tickle the fancies of kids who still think the lacivious covers to death metal records are awesome and the folks that still read Fangoria. All the promise that this game might be a sophisticated, intelligent horror experience working on psychological levels rather than visceral ones goes out the window- just like you do when a zombie mutant “variant” catches you, calling you “little pig” for reasons unknown before a defenestration.

Then there are the eye-rolling clichés- cryptic bullshit written on the wall in blood. Experiments gone wrong, despite somebody saying “hey, let’s don’t do that”. A Nemesis-like super zombie that you probably ought to just run away from. Hiding in a locker while a would-be killer looks for you. A motionless body that suddenly jumps up out of a spooky old wheelchair. I mean, come on.

In a way, the game reminds me at this point of Condemned without all of the punching. The terror (not horror) comes from the threat of realistic violence and brutality- not from encountering the supernatural or unexplainable. I’m not against a little blood and gristle when it drives the horror home. But I’m just not into excessive gore or violence as a shortcut to scare an unsophisticated player. It’s disappointing that video games far too often go for the juvenile shock rather than the high-minded scare.

I haven’t played through the whole game yet, maybe the goofball gameplay trope of having to flip two switches before I can flip a third will give way to something more compelling. Maybe the zombie mutants will reveal something more interesting or emerge as something more gasp-worthy and less cringe-worthy. Maybe there will be an explanation as to why batteries and file folders are the only things you can pick up.

At the very least, I can say that the game is probably better than The Last of Us- at least it’s honest trash and not practically breaking its own back reaching for some kind of artistic validation. And it’s free, so it’s zero risk if you have PS Plus. I’ve loaded it up more than once, which is more than I can say for just about every PS4 title I’ve played so far. But as for a “next gen” horror game, Outlast isn’t really doing much other than trying to scare me with *gasp* decapitated heads and piles of intestines. Hopefully, some developer will one day realize that modeling video game horror after carnival rides and silly haunted houses is definitely the low road.

You want a real horror game? Try Year Walk on IOS, one of the best horror video games I’ve ever played.

2 thoughts to “Outlast Blows it Within 20 Minutes”