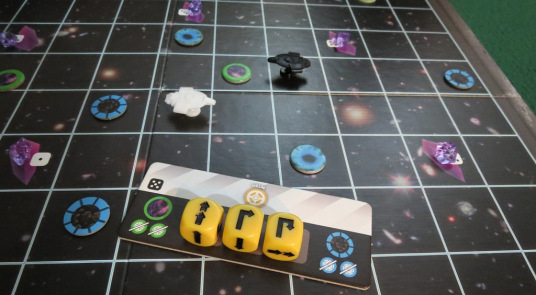 What if Star Fleet Battles, one of the most notoriously inaccessible and complicated games in all of the hobby, were a real-time party game best played at full volume by a large group of rowdy, not-shy-at-all tabletop hooligans? The answer is that it would probably be something like Geoff and Sydney Englestein’s Space Cadets: Dice Duels. In this new title from Stronghold Games, two teams of two to four players each are tasked with commandeering spaceships that looks an awful, awful lot like the U.S.S. Defiant from Deep Space Nine. The high level concept is that each team member manages one or more command stations on their ship, using power generated and distributed by the Engineering officer to accomplish the particular tasks assigned to their post. The goal is to maneuver your way into (or out of) firing solutions and torpedo the crap out of the other team’s ship. The ship that deals out four points of damage to the other wins the game.

As expected since it’s a follow-up to the original Space Cadets game that was released in 2012, the concept is similar but the original brilliantly combined social interaction, an often hilarious sense of personal responsibility, and puzzle elements to describe the Englesteins’ notion of spaceship management. But since this is effectively a duel, they’ve done some very different things with it that generally work quite well- provided you have the right kind of people involved and enough of them.

The gameplay is very straightforward and to call it “immediate” is an understatement since it mostly goes down in real-time. The player in charge of Engineering has a pile of standard D6s that they can roll and reroll as many times as they’d like until they get the results that they want. Each result corresponds to one of the Bridge Stations- the Helm (movement), Weapons (torpedo preparation), Sensors (torpedo lock-on and countermeasures), Shields, and Tractor Beams. When Engineering activates one of these stations, the player controlling that station then gets to roll as many specialty dice as were assigned to them. These dice are faced specifically for each station, so the Helm has arrows to control movement around a grid-based board, the Weapons station dice shows torpedo parts with which that officer assembles and loads munitions by matching a warhead, body, and tail. Like the Engineering station, the Bridge stations can all roll and reroll all they want until they lock in what they want and then return dice to the Engineering pool- effectively cycling power throughout the ship. Managing the flow of power quickly and efficiently is a core competency for successful crews.

When I read the rules, I thought “this is not much of a game” because of the endless rerolls. It read like a messy dice-rolling race. But in play, you realize that the time pressure of another team rolling dice and cycling power through their ship is where a lot of the friction, drama and excitement occur. You might have your Weapons man frantically rolling to load up torpedos and your Sensors officer trying to get the lock- all while the other ship is rolling to move and raise shields. Since this is all in real-time, there’s a genuine sense of tension and fluid movement- no impulses, phases, or IGOUGO here at all. But there will be yelling. Lots and lots of yelling.

It’s not exactly chaos. Everything stops when a torpedo is fired or a tractor beam, both actions requiring some simple resolution that effectively pauses the game. And it’s definitely not every man for himself, because ach team has a Captain that kind of coordinates everything. A good captain in this game will make the most of the Captain’s chair by doing their best Kirk/Picard/Adama/Ackbar impression, shouting “fire!” when everything is set and ordering everyone to do their job- which may include harassing teammates that can’t get the right results in a timely fashion. The captain’s role should definitely be handled by the most outgoing person on a team, because it’s almost a passive role- you can order folks around and holler for the Tractor Beam to shove the enemy ship, but you’re not engaged as much in the actual gameplay.

In some ways, the Captain role is indicative of what could be not necessarily a flaw but a particular weakness of this design. It requires this almost light roleplaying approach because the players are really kind of in charge of building the social construct around the otherwise repetitive dice-rolling to make it work. If this fa?ade of theme drops then the game suddenly doesn’t work. You’ve got to buy into what it wants you do 100% or you’re going to see a Captain that is foolishly not bombarding the other captain with trash talk and Wrath of Khan quotes or an Engineering officer that fails to bellow “Captain, she canna tek much morrathis!” In this game, that can be worse than missing a rule.

I like this game and I think it’s a fun design, but there is definitely a 20 story tall warning that should be applied to it because of the significance of the social and narrative constructs the players have to create around it. And that warning is that YOU MUST PLAY THIS GAME WITH THE RIGHT PEOPLE AND WITH AS MANY OF THOSE RIGHT PEOPLE AS POSSIBLE. This game is not a beardscratcher’s delight, it is not even really a strategy game. It’s a social action game and expectations should be coordinated with this description. Players that complain about it being “just dice rolling” need to excuse themselves to another table. Players that want to introspectively shuffle pieces through the walled garden of an individual player mat to generate points should have enough sense to steer clear of it. But players that dig the concept and get engaged with how this game wants you to play are going to have a good time. It’s pretty short too, about 30 minutes. Expect at least one rematch so that the defeated team can attempt revenge.

The player count may be a significant issue for some- including me. This is definitely, 100% a game that should be played by eight players and if you’re worried about what the “optimal” player count is, it’s eight. No exceptions, no qualifications. A four player game is entirely possible and you can have fun with it, but with only two members on each team the social dynamic suffers. I’ve only managed to muster six players for it and we definitely enjoyed it with three players per ship but I definitely felt like we were missing out by not having two more people on board. Solitaire is impossible. If you’re really crazy and have 16 people, you can combine two games to do a battle with two fully crewed ships per team. I bet that would be fun.

The Englesteins are doing some very interesting work going back to the very underrated Ares Project and I think this is a great example of their sort of outside-the-norm thinking about design. It does feel like a refinement or revision of the original Space Cadets (which I really prefer over Dice Duels), but this game is working in a much more social space. There have been a few games over the past couple of years that have done the real-time thing (Space Alert and Escape: Curse of the Temple most notably) but this game isn’t cooperative and it doesn’t require any kind of timer. The pressure is organic, coming from direct and concurrent competitive action. I’d definitely like to see games in the future follow on with this really quite innovative concept.