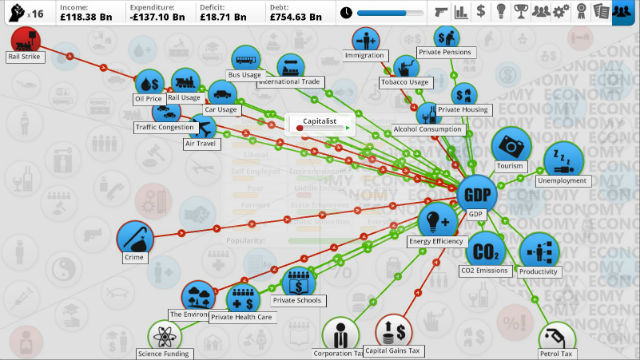 Everybody Wants to Rule the World, according to a well-known song from a band hailing from my home town. Well now you can experience ruling a small part of it, at least, with Democracy 3.

The new game screen gives you a choice of western nations to choose from, but it’s deceptive: your pick has very little impact on the game. Curiously for a game with this title, the actual different models of democracy like first past the post and proportional representation aren’t modeled at all. Rather, this is a game about the act of governance itself, of raising and spending revenue for the good (or otherwise) of your citizens.

Naturally, a realistic simulation of such a thing would be impossible, and even coming close would require a gargantuan quantity of inter-relating factors to influence and track. This is what Democracy does, and it could easy have been totally overwhelming were it not for a lot of clever interface design.

Most of the game takes place on a screen of circles, each with a colour and an icon describing what it is: blue for statistics (like GDP), red for serious problems (like an asthma epidemic) but mostly white for policies that you put in place (like maternity leave). However over one and arrows will magically appear showing what other things influence it, positively or negatively and how strongly.

It is overwhelming at first, but it very quickly becomes second nature to hover over a problem spot, pick out the most important related policies and tweak them to your liking.

Of course you’re not limited to simply changing spending levels for things already on the mind-map, you can add your own too from an impressive palette of policy from the mundane, like a mansion tax, to the blue-sky such as a new space program. The selection is expanded considerably by a new DLC pack called Social Engineering, which gives you a whole new raft of ideas to play with.

READ ALSO:  Why the Internet is Full of $#!t About Destiny’s Story

For those masochists who want to engage with the hard numbers instead of this super-whizzy graphical interface then there’s a staggering array of bar charts, pie graphs, numeric breakdowns and the like to keep you happy. You can even delve into the murky world of political focus groups and voting intentions if you want, although most of us can make do with the vague voting intention percentage you get each turn.

Even with the benefits of such a well designed overlay, this remains a colossal exercise in number crunching and could quite easily have been an awful, boring snoozefest. Thankfully, it isn’t. 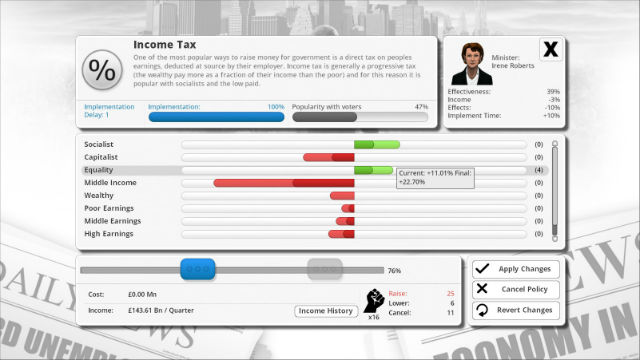 It must be understood that, like the SimCity games of yore, this isn’t really a game with a goal. You can aim to bring peace and happiness to your population and get voted in over and over again. But it’s not actually that difficult: build the basis of a strong economy without putting too many noises out of joint and your approval ratings will quickly go through the roof. But happiness is overrated. The appeal of popularity quickly wears thin.

Rather, the draw of the experience is simply to experiment, and this is where the game reveals its depth.

Whatever your political sympathies, Democracy 3 quickly demonstrates how high-flying ideology is rapidly pinned to the earth by the tedious tethers of reality. Raise excessive taxes on the rich and your economy will become hugely noncompetitive, leaving you with a soaring deficit and vicious interest repayments. Slash welfare to the bone and you’ll find crime and civil unrest running rampant, with similarly disastrous economic results.

The fun in the game, for me, was working it as close to the bone as possible, tinkering with the engines of government to deliberately create oddball or extreme mix of policies to see what situations develop in the country and still try and keep things on the rails enough to keep you in office. The game conspired with me in my efforts to create democratically acceptable socialist paradise by throwing curveballs in the shape of various random events like terrorist attacks to deal with. When my policies forced disgruntled capitalists into trying to bomb me out of Downing Street, I knew I was pursuing the right policies.

You see, one of the most striking, and true to life things about the game is that there are things voters care about more than the cost of living. You can succeed in improving life by almost every conceivable statistic and still get voted out because you ignored voters’ ingrained moral and political beliefs. So long as you keep various core demographics happy enough to keep voting for you, you can run things close to the edge and still return a majority at election time.

Democracy 3 might not be a particularly accurate simulation of a modern nation state but it is a fascinating experiment in sandbox gaming, an open world for you to explore shorn of its geography and culture and reduced almost entirely to numbers, yet enthralling for all that.