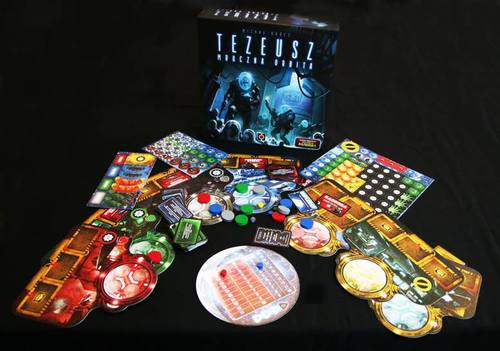 When I first played Michal Oracz’s Theseus: The Dark Project I scrambled for references to try to quantify the experience. I attempted to draw some kind of tenuous connection to Mr. Oracz’s previous success, a little game known as Neuroshima Hex. But that failed, apart from the fact that both are highly abstract, tactical games. I tried to parse how a game that I thought was going to be some kind of Space Hulk thing turned out to be so strange, with unusually restrictive rules and often inflexible gameplay yet with an ample sense of theme and setting. The mechanics were from out of nowhere- I couldn’t draw a sensible lineage to anything other than Manacala, of all things. My initial reaction is best summed up as “what in the hell was that?”

And that, readers, is an awesome feeling.

Some folks are going to go into this game, recently released by Portal Publishing out of Poland, and they’re going to get abrasive. They’re going to huff and puff about some of the gamier aspects of it- like how the movement and combat works. Or they’re going to engage in some beard-scratching over how sometimes there isn’t enough control or that player interference can make it hard to plan anything more than a move ahead. They might even butt up against the game’s extremely tight scope and limited range. Or they may make the mistake of assuming that there is no connection here between the processes and a story.

It’s not the most original story, but that’s kind of OK because it’s really better described as an atmosphere rather than a grand science fiction epic. Five different factions are exploring an abandoned space station that is depicted as a set of large sector cards laid out in a circle around a central space area and scoreboard. There are your generic space marines who are obviously better than the rest at shooting and exploding things. There are aliens of the Xenomorph or Genestealer persuasion that can use ventilation ducts, spawn critters and set up tentacle traps. The human scientists are collecting data, and to do so they might set up cameras to observe but they’ve also got some nasty defensive equipment with them. The Grays are also on the station for scientific purposes but they have special movement and stealth abilities. And the Pandora faction are completely different, taking over opponent’s resources and using them for their own mysterious purposes.

The gameplay is quite simple. Every player has three pawns which occupy the station’s sectors. Each sector has four spots for these pawns, some spots are connected to each other by lines and others are blocked by walls. On a turn, one of your pawns must move as many rooms clockwise as there are total pieces in the sector where it starts. Once your pawn arrives, it can activate that sector’s ability. This might mean to trigger a Massive Onslaught where everyone fights, place a malfunction token on another player’s resource, or activate another of your units. Landing back at your faction’s starting space gives you an upgrade token so that you can flip one of your pawns to improve its combat ability or you can enhance one of your resource cards.

After activating the sector ability, you get to use any installed resource cards of your faction in that sector. This might be a trap of some kind, some sort of combat bonus or movement ability. These get installed at the end of your turn .You’ve got the option to place one of your faction’s cards in a pending slot above the sector you stopped in, possibly knocking someone else’s out. If one of your cards is already in the pending slot, you get to install it in any sector on the table with some card slots offering special bonuses if you build on top of them.

Movement is really the most important aspect of the game because it controls everything that happens, everything that you can activate and everything you can place. Coordinating the installation of your modules is tricky, particularly when other players are constantly knocking your pending cards out of socket, so to speak, but it’s always satisfying when you pull it off. The movement is ruthlessly restrictive- you might find yourself in a situation where you have two or even three choices that all result in the same outcome. Or you might find yourself unable to avoid combat. Not every unit starts the game with the ability to fight.

Combat. other than the all-in Massive Onslaught that is one of the sector abilities, occurs as a function of movement. If a unit moves into a room where there are three others, it triggers a Lesser Onslaught. Units check to see who they can shoot based on the arrangement of slots and obviously they can’t shoot through walls without a special ability. Units with one lightning bolt icon can inflict a damage point on an enemy faction. Units with a triple lightning bolt icon hit everything they can see.

Note that I stated that you damage a faction, not a unit. This is one of the areas where Theseus goes highly abstract, but I think it pays off. Units are never lost in this game, you’re not trying to clear the board of them or anything like that. Every point of damage is registered on a central, 20 point chart that indicates how much damage you’ve taken (or given, in the multiplayer game). But the goal of the game for the Scientist and Grey factions isn’t necessarily to do damage, because they also have tracks for Data Points. These teams win if they get 20 of those, generally earned by the module cards and the grey’s ability to collect data in combat.

But here’s the deal. One of the things that makes this game replayable and far more variable than I expected is that each faction only brings 12 cards out of a deck of 25. This means that strategies have to develop on-the-fly and largely in reaction to what cards are revealed over the course of the game to have been included. The Scientists might not be able to rely on their surveillance cameras for the 20 Data Points victory and may instead need to focus on activating and upgrading their sentry turrets to win with the damage victory. The Alien player might have lucked out and drawn all of its cards that spawn its minor tokens, swamping the station with their brood. You just don’t know until you play it out, and since each faction plays very differently as it is there’s tons to consider. And Pandora doesn’t play like any of the other four, which makes for a nice “advanced” faction to check out.

At first I felt like the game was best with two and it seemed to be written for two- control was greater and it felt much more tactically sound. But the more I played with three and four players, the more I liked the chaotic, swingy gameplay and the challenge of competing in such a pressurized, contained environment with virtually no wiggle room. This game is ruthlessly direct and to the point. It doesn’t give you ten decision points per turn, it sometimes gives you just one but that one can be critical. Do you really want to trigger that Massive Onslaught when the Marines are going to get four points out of it? Or do you want to move to space one of his upgraded units and then hope to trigger it next turn? Or will the board state be completely different by then with an entirely different set of considerations?

I’ve waffled quite a lot about Theseus. I knew from the first game that I liked it. It’s such a singular, really kind of unprecedented design that I don’t believe any serious critic of modern board games couldn’t be moved by such an out-of-bounds design. It’s not worker placement, deckbuilding or Dudes on a Map. It’s bold enough to be an abstract movement game rooted in Manacala but the theme actually kind of works with it, outside of the movement rules that really do not speak to any specific narrative touchpoint or the high-level, non-specific combat results. But it’s too wild for the abstract brainburners and maybe too brainburningly abstract for dogmatic Ameritrashers.

But at the end of all the waffling and attempts at quantifying this beautifully odd and completely unique game, I’ve realized that I just absolutely love it. I think it’s as good but maybe not as iconic as Neuroshima Hex. With that said, I can guarantee you that you don’t own any game quite like Theseus: The Dark Orbit.