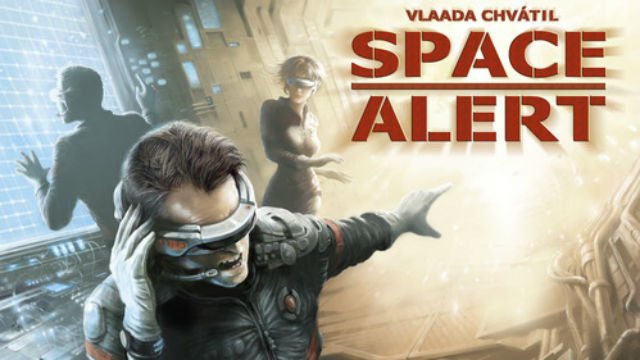 The world of board games is a largely cerebral one, even at the thinnest end. For most games, physical appreciation begins and ends with the tactile nature of the pieces. But just occasionally, you’ll find a game that breaks out of your head and into your body. The first one I discovered was Labyrinth, which made me feel queasy as I planned massive terrorist outrages across the globe. Space Alert is the second. Space Alert gave me indigestion.

After playing nonstop for several hours – a large number of games since most last only 20-20 minutes, I lay in my bed and failed miserably to sleep as stress and adrenaline coursed through my nerves and acid ate away at my intestine. I wasn’t sure if what I’d just experienced was fun or not, but it was certainly powerful, and utterly unique.

Some background. Space Alert is a co-operative game, a genre I’m not over-fond of. Like most titles in this family, it effectively tasks the player with a puzzle to jointly solve. They’ve a spaceship crew who must survive an alien onslaught by powering weapons and shields from a central reactor, taking down the incoming enemies before they blow the ship apart and deal with internal threats like structural damage and a malfunctioning computer.

But the game has a quite evil twist up its sleeve. Rather than allowing players to consider the conundrum at their leisure, the game runs on a timer, placing them under immediate pressure. And it’s no ordinary clock, but an audio track of ever-increasingly urgent alarm klaxons which in punctuated by various computer instructions.

Mostly you’ll be asked to turn over a threat card and add it to one of the incoming trajectories. But there are various other instructions you’ll have to pay heed to: communications blackouts where no-one is permitted to talk, and incredibly brief windows in which players are allowed to swap action cards with one another. Until you’re very experienced with the game, the timing and nature of these announcements will come as a surprise, creating a delicious mixture of thrills from what’s mechanically a fairly deterministic game.

These action cards are they key to the game. Each one shows a movement arrow or an action, and players plan for the mission within the time limit by placing them on a board to indicate the actions they’re going to take during the resolution round. So, if you’ve got a hand full of actions that deal with energy transfer that’s going to be your major role for that mission.

But the geography of the ship being what it is, it’s more efficient if you can get to a station and stay there, raising the shields and then manning the cannons or whatever. But often you can’t: you don’t have the cards for it. And card swaps don’t always help because they occur before you can properly digest all the threats you need to deal with, or the actions you’ll have available later in the round. 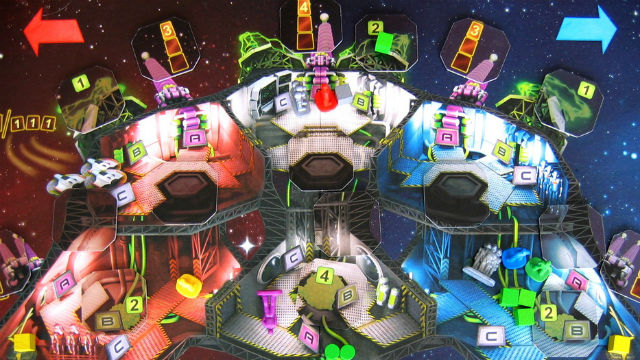 This is fairly common and it’s incredibly frustrating. The game is a hideous pressure cooker as it is, and trying to do the basics like get players to stop, think and co-ordinate their actions when everyone is panicking and shouting and running around like headless space-chickens is quite enough to induce terror and despair without the additional barrier of a bad hand, a barrier you didn’t make for yourself and can’t do very much about.

Not that you have any time actually think about why you’re close to tearing your useless collection of action cards in half as cryogenic frigates and pulse balls hurtle toward your ship, spitting out ten different flavours of firey laser death, or fissures open beneath your feet and threaten to tear the ship in two or boarding parties rampage around the interior shooting everything in sight. You’re just trying to work out what you can do with your actions and communicate this to the captain, hoping desperately for orders that might never come, as the timer ticks inexorably down to zero and the sirens become ever more insistent.

It’s an incredible experience. And then the silence comes.

Space Alert is a Vlaada Chvatil game, and that pretty much guarantees you’re going to get brilliant innovation, and also makes it likely that you’ll see a two phase game. He’s very fond of an initial planning phase followed by a resolution round, and Space Alert follows this pattern. One of his previous titles, Galaxy Trucker, had a superb real-time round of competitive building followed by what I always felt was a rather tedious exercise in which one player just drew cards and told everyone what was happening to their ships.

I was worried that Space Alert would fall into this same trap, but it doesn’t. While the setup is similar, with one player working through the turns, everyone pitches in with moving their pieces around and adjusting threat tracks. But the real kicker is that most of the time the planning was so chaotic that no-one will have a clear idea of what to expect when the actions are revealed. So all the players are taut with the thrill of waiting to see whether they’re going to survive the trip or not.

One of the things I struggle with in co-op games is the alpha-dog problem, where one player just tells everyone else what to do. Space Alert does absolutely nothing to ameliorate this issue, yet it still works. It took me a good few games to realise that this is because it actually makes a virtue out of the problem, going so far as to assign a specific role, the Captain, to players with this tendency. You’ll need a good Captain to even have a chance of surviving the interstellar bruising that Space Alert dishes out, so it’s perfect for players who want to embrace their inner manager and step up to the challenge of command.

One thought to “Space Alert Review”