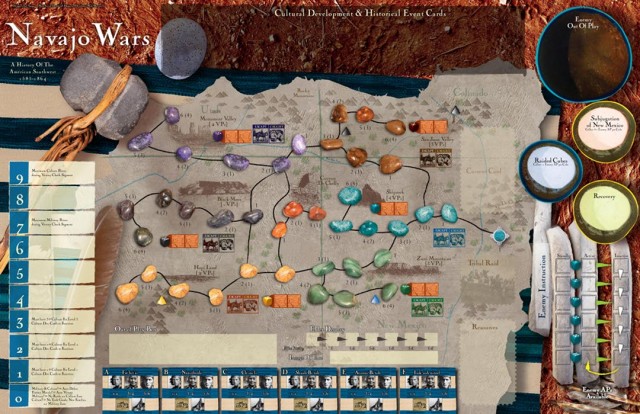 Joel Toppen’s Navajo Wars: A History of the American Southwest, 1598-1864 is the story of the slow-motion apocalypse of a people. The game is, as you might guess from the title, about the Navajo (Dine) people of the American Southwest and their struggle to maintain their families, culture and ways of life in the face of Spanish, Mexican and American encroachment. Long before Kit Carson comes onto the scene during the Civil War to rope the Navajo onto a reservation, it’s clear that this is not a battle the Dine are going to win. This is, quite wilfully, a game about the twilight of these people and your success in guiding their fate is measured by a degree of inevitable failure. The game has much in common with other card-driven wargames in that specific historical beats, personalities and turns of events are unavoidable and your ability to anticipate and mitigate the script of history is critical. But it doesn’t really play like anything descended from We The People.

Mr. Toppen’s take on the subject is unusually sensitive, heartfelt and compassionate. He believes the Dine can survive, even if the history states otherwise. And as someone that has grown up in and around the Navajo people as they exist today, he’s certainly a qualified observer of their traditions and values. There is a palpable sense of respect in this game, a passionate sense of understanding that this game is about families more than it is about armies. Planting or harvesting corn, having children, seeing people grow old and die, moving to more arable land and listening to the wisdom of an elder talking down a particularly ferocious bunch of raid-happy braves are some of the smaller yet more profound moments of this game.

It’s designed as a solitaire experience- Mr. Toppen explicitly states in his notes that he didn’t want one player to have the extermination or subjugation of the Dine as a goal. So instead, he designed an absolutely brilliant mechanic that automates the opposition. It’s a fairly complicated system, but the short version is that it operates on a sequenced series of chit activations that determine what your Spanish, Mexican or American adversaries are going to do. They might conduct raids, build missions, attempt to subjugate, or even do nothing during periods of relative piece. This system works in concert with a cube drawing mechanic that reflects the effects of raiding and occasional die rolls so that it’s never completely predictable.

The kicker is that certain effects might cause these chits to flip over or move in their sequence, effectively simulating an intelligent adversary that adjusts plans according to the player’s actions. I wouldn’t go so far as to say that it “feels” like playing against a live opponent, but it does generate a sense of shifting priorities, simulated tactical judgment and shifts in long-term agendas. It’s a distant cry from the usual “whack a mole” card flipping or triage-based activation systems that drive most solitaire games.

There is a cooperative option, but to be honest I didn’t even try it because I didn’t think it looked particularly interesting. I think this is a game that is actually best experienced by yourself. Freed form the social expectations of tabletop gaming, you’re better able to dig into the game’s very complicated mechanics and rich story. And frankly, I think you kind of need that space because this is not a simple game in any way. It’s not one of those that’s “actually pretty simple once you get the system down”. The rules are reasonably easy to grasp and a playbook tutorial is an absolute must. But once you’re in the wilderness with this game, pouring over its charts and flowcharts, flipping through the player aids, and referencing the rulebook at almost every turn the last thing you want is to feel responsible for someone else’s fun.

In addition to the amazing AI system that makes this one of the more robust single player options available, there are other absolutely brilliant mechanics at work. In particular, I love that certain benefit cards (Blessing Way) cards can be held in the hand but they are a liability. If a card comes up that activates the Enemy Way that is on every Blessing Way card, you’re hit with a negative effect. It’s a great decision point- hold on to a valuable card at risk. The familial systems are smart, simple and appropriately abstract. Men can lead the kinds of raids and counter-raids that typified the conflict of the titular Navajo Wars. Raiding a lot increases your family’s ferocity and lowers their ability to evade when interlopers conduct raids of their own. Women produce trade goods. Children grow up- or they might be captured in one of the nasty slave raids that occurred during this period. All may become elders, in time. The sense of organization and community is handled at the highest level, but it imparts a strong sense of who these people were and what their drives were.

There’s just so much to this game. Managing morale. Balancing the military footing of the Dine versus their cultural level. Dealing with the effects of drought. Feeding your people. Raiding to try to get horses or sheep. Trading with local forts or tribes. Developing cultural advancements. Fighting (or evading) battles. Dealing with random encounters. And there’s always the need to mitigate the effects of looming historical events that can seriously alter the course of the game.

All of the above means that Navajo Wars is a very complicated game with complex, interlocking systems. It can be quite intimidating and at times even rather opaque. And then there’s the fact that playing it one thing, but playing it correctly is another. Playing it well is another proposition. It is most definitely not a game to pop open, punch, and get to playing the first night you bring it home. After playing through the tutorial, several false start games, quite a few abandoned ones and just a couple of complete to-the-bitter-end ones I still feel like I don’t have a handle on how to win it. I’m still not even able to sit down to play without having the rulebook and player aids open the entire time. But it feels worth the effort (and wading through its fussy administrative processes) because playing Navajo Wars is mostly a sublime pleasure punctuated by moments where not only do you get it, you get how profoundly impactful and resonant this game and its historical narrative can be when it is at its best .

Fittingly, I think it’s one of the best-looking titles GMT has produced to date, a handsome game that captures the spirit of the people and their story. I love that the family member chits have actual photographs of Navajo on them. The board looks like the work of a Navajo craftsman, with simulated materials like polished stones to mark each of the point-to-point geographical areas. The look is appropriate because everything about this game feels carefully handcrafted, meticulous and detailed.

I haven’t reviewed a GMT game in quite some time, even though I strongly believe that they are one of the most consistent and valuable publishers working in hobby games today. You can always count on a GMT game to not only be well-supported, but also immaculately presented with great rules writing and clear, concise graphic design. By sticking to historical and real-world topics, I’ve found that GMT’s titles are among those most likely to get into some of the more interesting possibilities of game design. My 2010 pick for Game of the Year, Labyrinth, for example, was a brilliant analysis of the War on Terror with a very specific political perspective that invites the player to engage the content and participate with the designer in not just creating a hypothetical construct of possible military outcomes but also in exploring the social, cultural and political aspects that define the great conflicts of history.

For me, this holistic view of history is what defines GMT’s top games and distinguishes them from the more traditional “conflict simulation” titles. It’s one of the knock-on effects of the influence of card-driven wargames over the past decade and a half, this notion of wargames telling broader, more inclusive stories far beyond the hex-and-counter games of the 1970s and 1980s. Not that games focused on battles, troop movements and so forth are somehow lesser. But every so often GMT releases a game that is more than that, something that reaches for a more widescreen view of history. A game like Labyrinth or Twilight Struggle. Navajo Wars, a game that I took the liberty of listing as one of 2013’s Barnes’ Best before a formal review, is one of these landmark titles.

One thought to “Cracked LCD- Navajo Wars in Review”