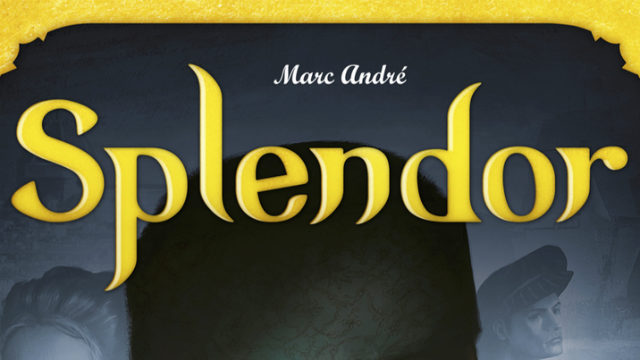 When I cracked the shrink on Splendor (what happened to the missing ‘u’?), I got a nasty surprise. I really thought that so many people had taken the piss out of the overuse of the “Renaissance merchants impressing nobility” theme in games that it had rightly been killed, had its head cut off and its mouth stuffed with garlic-infused meeples that it was gone forever. Yet it it was again, in my hands, in 2014.

But review copies are review copies, so with a heavy heart I began to dig into the box. A deck of cards with some lovely, if rather generic, artwork depicting various scenese of Renaissance life. Some delightfully hefty gem tokens in various colours. A punchboard of nobles and a page of rules. So it was easy to learn, and it looked nice.

Perhaps it wasn’t going to be quite so awful after all.

It was ludicrously easy to learn. Each turn you either grab some gems, spend some of your collected gems on buying a card, or reserve a card to buy later, keeping out of the greedy mitts of your opponents. Each card requires you to pay with a different combination of gem colours but itself contributes a gem to all future purchases. Some are also worth victory points, and you can also get these by “impressing” (oh, God!) one of the nobles with your gem collection. First one to fifteen points wins.

Nowadays I try not to do such an obvious and tiresome thing as a whole-rules paragraph near the beginning of the game but I really couldn’t help it here. It’s just too simple. A child could play this. My children did play it.

But I’m getting ahead of myself. After reading it, it sounded way too simplistic to even be interesting. My lack of enthusiasm must have shown to the people I cajoled and begged to play it with me: all refused. But eventually, I got my long-suffering family to agree to help me out.

What Splendor actually feels like is a peculiar variation on Ticket to Ride. It’s got the same desperate vibe of trying to collect sets in order to steal goodies from under the nose of your eager opponents, the same teeth-grinding frustration when someone else does it to you. 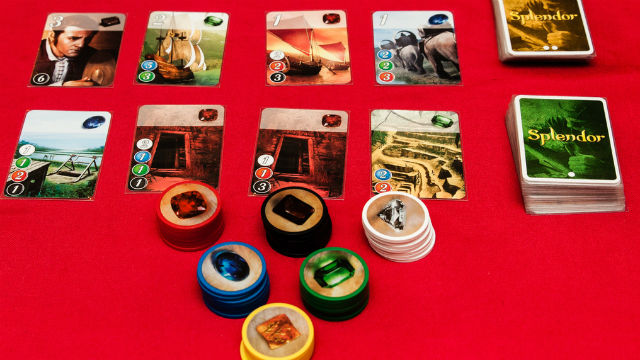 But all the rough and ready edges of that design have been gently smoothed away, a set of mechanics moulded and shaped by the passing of the years. In place of randomly collecting colours toward your sets, you choose what you want. Instead of pot luck when it comes to grabbing routes you can “reserve” the ones you really want, at the cost of a turn’s play. Rather than the iron consequences of stolen routes forever closed to you, there’s the hope of a new card that might, just about, fill the same gap if you can get to it first.

But Splendor does something that Ticket to Ride does not. Slowly, as you begin to collect cards, it becomes apparent that this is actually a super-simple economic engine game. Your primary purpose early in the game is to buy cards that help you buy bigger cards, on and on up the tree until you can get the fat victory point cards and win the game.

That this ends up happening with incredible speed is another of the game’s surprising pleasures. You only need fifteen to win, and some of the big cards are worth five or more. It’s quite possible for a game that’s been ticking along at a quiet pace to suddenly break into desperate tension as everyone makes a break for victory at the same time, with the win often going in unexpected directions.

Splendor isn’t everything. The theme is comically pointless, and while the stripped down mechanics pack in an impressive amount of variety there’s unlikely to be enough there to sustain real long-term interest. I’m not even sure it’s everything it thinks it is: while moderately strategic, a lot can hinge on what cards come out and turn order.

But Splendour undoubtedly is a quality addition to that small but vital genre of catch-all medium-light hobby games that seem to offer a little bit to please pretty much anyone, like light glittering on the surface of a gemstone. Enough simplicity for anyone to learn, enough strategy to exercise the strategists, enough randomness to satisfy the gamblers, enough interaction to engage the warriors.

One thought to “Splendor Review”