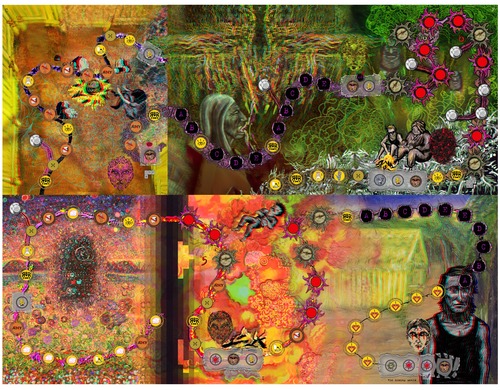 Nate Hayden’s The Mushroom Eaters is a very limited release from micropublisher Blast City Games. You might remember Mr. Hayden from the ravishingly grim black metal brawl Cave Evil from a couple of years ago. He’s shifted gears with this release, producing one of the most profound, transcendental gaming experiences I have ever had in a lifetime of playing games. When I call this game “challenging”, I don’t mean that it’s tough to beat or that the rules are complex. I mean that its theme and the way the subject matter engages the player is especially demanding and in a way that isn’t just rare in the games medium- it’s almost nonexistent. I don’t know that I’ve ever played a more provocative and daring game that risks everything- including core notions of “fun” and “competition”- to illustrate what is ultimately a journey of the mind, body and spirit. And yes, this game is about tripping on psychedelic mushrooms as the title suggests.

Before you read further, let me make it clear that this is in no way a game about getting fucked up on drugs and freaking out, man. This is not a game for hippies, pothead dropouts, acid casualties or tweakers. This is a game where the goal is to use the language of its medium to communicate a ritualistic, shamanic psychonautical experience and the changes that the individual goes through in a trip that goes through some very intimate, internal spaces yet is shared with a group. It is about the personal thought processes, the physical experiences and spiritual revelations that occur. Along the way, maybe you’ll notice that the room is getting too cold. Maybe you’ll throw up or start giggling. Maybe you’ll reflect on the Great Paradox and what it means for both the self and the other. The atmosphere this game creates feels real, alive, vital. Yet its tone is cryptic, mysterious and religious.

The Mushroom Eaters is as much a game about breathing, sharing and feeling the rhythm of an imaginary shaman’s imaginary drum tapping out a beat while you lock into a mantra and focus your mind as it is about anything to do with psylocibin. It comes across as a holistic experience that is abstract yet with the player imparting meaning to the abstractions and developing an interior dialogue with the signifiers the game is offering. There’s even a track gauging your nervous system throughout the trip- a level of detail that feels almost like something out of a Phil Eklund game. I’ve never taken any kind of psychedelic in my life, but this game made me understand more about the experience and their use in spiritual traditions than I ever have before.

Needless to say, there has never been a game like this, at least when approached as a complete work. Mechanically, the game is quite simple and maybe even cloyingly familiar. Despite the esoteric theme it’s not entirely unlike Knizia’s Lord of the Rings game, where players play cards to move a common pawn along a path, triggering action spaces along the way. Or they may diverge from the main path and contend with personal issues, revelations, discoveries or insights. There are resource and hand management elements, wooden cubes and dice, but talking about the nuts and bolts of this game feels almost trivial.

It is primarily a cooperative experience as players represent apprentices to a shaman that are partaking of the ritual mushrooms. The collective goal is to progress together through the ritual. The only real conflict or opposition is the dichotomy between benefiting the group or the self. At the end of the ritual a new shaman is to be determined so there is a “winner” but it’s not quite like winning other games. The game is soundly designed, but it is the context and the fine connections to thematic material that make what are quite common gameplay elements seem completely fresh, new and almost alien. When you are playing this game, even rolling a die or playing a card feels like learning a new way of using a word you already know. This is a game that is rewriting syntax, rewriting the way that we understand games to communicate their themes.

Oh, and it also comes with 3D glasses.

Yes, there is a 3D element to the game. It isn’t a “comin’ at ya” kind of silly gimmick. The glasses, when worn, make the board crackle with visual energy. When the path leads to moments of intensity, those spots on the board might just be illustrations of a fireball but with the glasses on, they’re searingly, electrically hot. I’m reluctant to spoil one of this game’s most incredible ideas, but the board actually unfolds to reveal new panels as the game progresses, becoming more and more psychedelic and vibrantly illustrated as you move toward the end of the ritual. You’re going to want to wear the glasses. I’ve never seen anything like what this board does. It’s absolutely genius.

When I opened this game, I had no idea what was going on with that insane board but nonetheless I was completely blown away. Finally, here was a game that had actual artwork instead of illustrations. Cards were covered with scribbled pencil illustrations on notebook paper, surrealist multimedia collages, DIY photocopied pictures and about a hundred other things that most board game publishers would never in a million years OK for publication. It is truly a work of art, raw and exhilarating to look at in a way that games almost never are.

For all of my praise- this is personally one of the most important games that I have ever played- let me be clear about something directly connected to the style of this game as well as its subject matter. The Mushroom Eaters is not a game for everyone and in fact I would be very reluctant to recommend it to all but a very, very small number of people that I believe would appreciate the more esoteric and obscure elements of it. It is not exactly a game to get the gang together over for a hootin’ and hollerin’ good time and for many gamers if the artwork doesn’t put them off then either a misunderstanding of the “drugs” theme or the way it either completely ignores or reframes typical gameplay elements will. 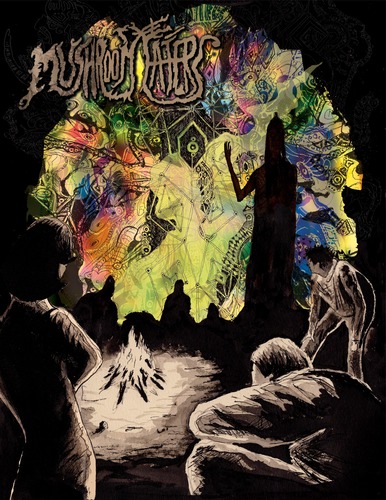 Yet I find myself thinking that everyone designing games should take a look at what Mr. Hayden is doing here with theme, getting to a deeper level of intellectual (and possibly spiritual) engagement than just using a setting or environment to tell a cool genre story. No dungeons, no dragons, no zombies, no space marines and absolutely no miniatures. This is a game about a human experience at a very deep psychic level. Mr. Hayden has realized the potential of games to express something other than conflict, resource management, or other material agendas. This is a message that everyone in gaming ought to hear.

But there again, I’m frankly glad that it is such a tiny game that only a few people will get to play. It’s just not intended for a mass audience and it boldly makes no concession to mainstream appeal. If the big publishers are like the major studios putting out the summer blockbusters at the local megaplex where you go on Friday night with your friends, this game is the Jodorowsky film playing down at the tiny, broke-down art theater where you’ve had your greatest epiphanies of what film can be. I hate to play the “most people won’t get it” card, but there it is on the table. If you are one of the people who might get it, then The Mushroom Eaters could be a very, very special game for you.

3 thoughts to “Cracked LCD: The Mushroom Eaters in Review”