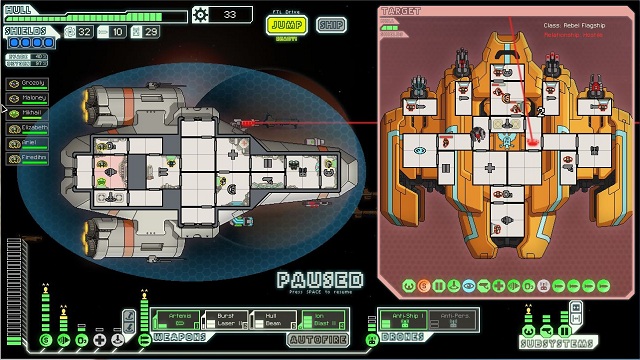 Note: I originally published this article in September of 2012. I haven’t updated it for the Advanced Edition, but with Advanced Edition and the iOS port out today, I thought it worth a bump back up to the front page. Most of the advice herein remains accurate. I’ve only just begun to mess with the AE on iOS, but hopefully (maybe, maybe, maybe) I’ll have some new thoughts to post on it next week. Possibly. I think.

I am, very likely, the last person on Earth who should be writing tips guides for gamers. Nonetheless, I’ve put in enough time and spectacularly destroyed enough starships (along with going 2 for 2 in victories on Easy) that I feel I can offer you, dear reader, the chance to learn from my mistakes. Without further adu, I present to you 15 tips for surviving to the final boss in FTL:

1. No rule is more important that this: Scrap is everything. EVERY-GODDAMED-THING. Without it you don’t repair your ship, you don’t buy upgrades, modules, or crew. Sectors 1 through 7 are entirely about the accumulation and proper use of scrap. Every decision you make should be done with an internal scrap calculator running in your head. If it will result in a net loss of scrap for no notable gain, avoid it.

2. It should be obvious, but it bares saying anyway: Pause is your friend. Pause early. Pause often. Pause whenever you’re not positive that you know exactly what’s going to happen next. They put Pause on the space bar because they want you to use it.

3. Explore. Because this game is a drive to reach Sector 8 it feels like it wants you to beeline for the exit from sector to sector. This strategy can get you safely to Sector 8, especially if you have long-range scanners that let you avoid encounters, but it won’t prepare you to survive Sector 8. That requires a significantly upgraded ship. Ship upgrades cost scrap. To get more scrap you need to spend as much time in each sector as possible. Maximizing your encounters maximizes your reward potential and that’s the only way you can build up your ship and crew well enough to have a chance against the final encounter. Remember that the Rebel fleet only advances in your sector when you jump. You can spend as much time as you need to at each individual beacon (jump node).

4. Pay attention to distances between beacons. (This tip seems invalidated for Adv. Ed. You can select any system and see a way to navigate there.) The randomly generated map only tells you which beacons you can jump to next and it doesn’t let you know when two beacons, while perhaps still adjacent, aren’t close enough to jump between. Consequently, it’s entirely possible to jump your way to a dead-end and have to back track. This both wastes fuel and gives you less time to explore before the Rebel fleet overtakes you. Back tracking in FTL should be avoided as much as possible, though it can be worth it if you’re finishing off a quest or checking out a distress call.

5. Your ship’s weapons systems are an orchestra. They should be targeted and fired in concert with each other and with their strengths and weaknesses firmly in mind. So, don’t use the Autofire option, which tells your weapons to fire as soon as they’re charged. Fire them in a sequence that makes sense given your particular opponent. As an example, against a ship with marginal (strength 2) shields, firing a missile to damage the shield system and then immediately following-up with a burst laser to the weapons and a fire beam to its life support rooms (along with whatever else it can reach) and you’ll have dealt a crippling blow. The AI then has to balance its crew resources between repairing weapons and shields and keeping life support going. There are tons of weapons variations in this game. Learn them. Know them. Synergize. 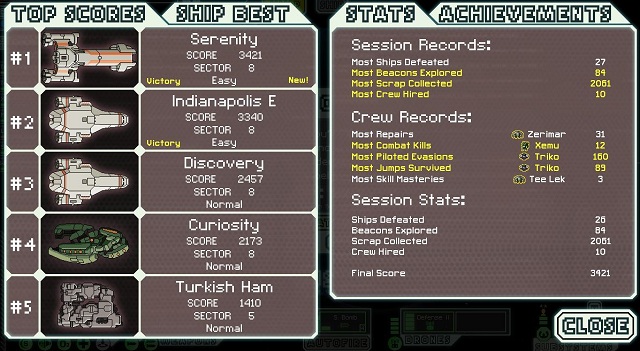 6. Understand how beam weapons work. They can get through shields if the weapon has a higher damage rating than the shield, but they don’t reduce shield strength like lasers do. Use a fire beam first and it won’t so much as dent the shield. Use the burst laser first and you’ll waste half its potential just getting through the shields, but you will reduce them.Also, beam weapons stretch from point A to point B, where you designate the start and end points. Because they do their damage on a per-room basis, make sure you hit as many rooms as possible. As a general rule of thumb, if you’re not hitting three rooms with your beam weapon then you had better have a specific purpose in mind (targeting a specific ship function or room with crew in it).

7. A successful missile attack is a beautiful thing, but they can be dodged or shot down by a defense drone. Bombs, which use the same ammunition, can bypass both of these defenses. (I’m not entirely clear on how bombing accuracy works as sometimes they seem to miss. I haven’t figured out the rhyme or reason to that. Maybe shields/dodge can play a role? Chime in in the comments if you know.)

8. Don’t be afraid to run. You won’t be in optimal position against every ship variant you’re likely to run across and sometimes you’re going to be outgunned or just in a bad match-up relative to your build. If you’re taking damage from an enemy ship, get out of Dodge as soon as the the Jump button lights up. Remember that scrap is everything and if you’re going to end up spending more in scrap to repair your ship than you’re taking in by winning, then the encounter won’t be worth the effort. “He who fights and runs away, can run away another day.” Words to stay alive by. To this end, engine upgrades are your friend as they not only increase your dodge chance, but they significantly reduce jump spin-up time.

9. Assign your crew specific jobs. Crew members level up at a system/task the more they do it. At the start of your run, pick a pilot and keep him in that role. The same with engineering, weapons, and shields (if you have enough crew to do that). If you have the luxury of extra crew, assign someone specific (preferably Engi) to repairs. If you have excess Manti crew members, they’re excellent boarders. Just don’t shuffle people between roles if you can help it. Also note that skill progression can be gamed. The person who finishes a repair gets the credit for it, no matter who starts it. The guy who kills someone in hand-to-hand gets the benefit of that experience regardless of who did the most damage.

10. Capturing ships by eliminating opposing crew offers better rewards than destroying them. Mostly you get more scrap, but somewhere in here you may have seen me mention this: Scrap is everything! A bio beam (crew killer) or fire beam (damages systems and sets rooms on fire) are ideal for this. A fire beam combined with the ability to teleport in some Rockmen crew members (immune to fire) is a killer advantage that you should exploit when you’re able to. 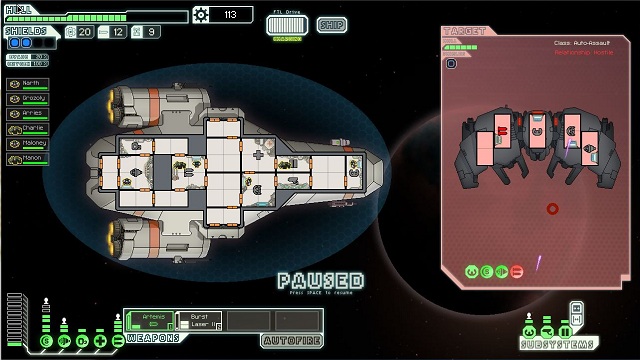 11. If you teleport in a boarding party, give your teleport system at least two power (this requires an upgrade). On one power you have a longer wait between use and very often that wait is longer than your boarding party will survive if under attack from the target’s crew. A healthy party will almost always live long enough for you to beam them back if the transporter room uses two power bricks.

12. Automated ships do not have life support. This means they have no atmosphere. Sending a boardparty to these ships? Not a great idea.

13. Fully upgraded sensors may seem unnecessary, but a single upgrade is essential for boarding parties so you can see the make-up of the target, where the crew are assigned, and where you may have damaged their hull or started a fire. Beaming them in blind is a huge risk. Full upgrades (three bricks) give you the luxury of knowing how the ship is using its power, which can play a huge part in deciding where to target your weapons or send your boarding for the most bang for your buck.

14. Roll with the punches. There’s a debate to be had about how much this game depends on luck, but just as much depends on your ability to play the hand you’re dealt. You won’t always have access to a cloak or your favorite weapon or drone combination. You have to adapt your strategy to the opportunities the game presents. Remember that this isn’t a game about winning so much as it is about seeing how long you can survive. There is immense satisfaction to be had in simply surviving long enough to reach sector 8 despite a sub-optimal build.

15. Did I mention that scrap is everything?

8 thoughts to “FTL Tips and Strategies”