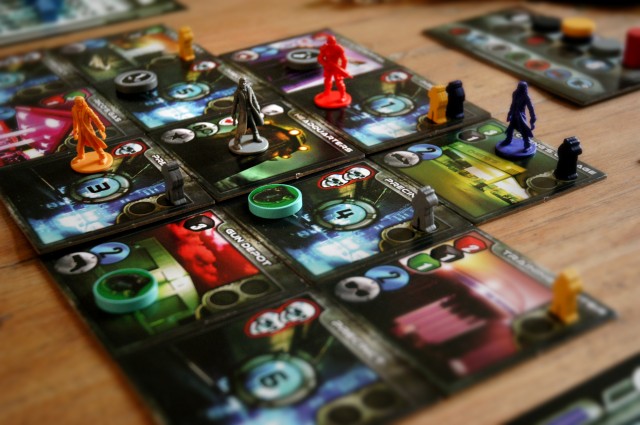 If Panic Station was Belgian designer David Ausloos’ homage to films like Alien and The Thing, then his new game Rogue Agent (just out from Stronghold Game in a special limited edition) is clearly his love letter to Blade Runner and 1980s-era cyberpunk noir. Complete with miniature agents that looks unashamedly like Harrison Ford’s Rick Deckard character and an “android” gameplay mode that aims to create some of the “is he or isn’t he” suspicion from the film, it’s really mostly a cops-and-robbers game where you gather resources, track criminals and bring them in for bounties back at the Rain City police HQ. And speaking as someone who once owned one of the only 100 copies of it ever made, it is a far better representation of the theme than the legendary Blade Runner game was.

Like Panic Station, the game has been met with mixed reviews, including one from Lord Tom Vasel and a general “kiss of death” sub-seven aggregate user score at Boardgamegeek.com. I have to admit- again, like Panic Station- that I did not like this game the first time I played it. In fact, it crashed and burned so hard with my group that it almost got the ultimate penalty for an ill-favored game- to be swept back into the box without sorting for storage. I felt like the theme was muddled, with this odd bomb defusing thing going on and lots of dice-rolling to find gas or bullets, which basically means to bump a cube up one of your agent’s resource tracks. I really do not like “roll to find” mechanics in general, so this game was sticking it to me from the get-go. The rulebook, while not as messy as Panic Station’s, still baffled us and I’m not sure anyone defused a bomb correctly in that maiden outing.

So I started to think “oh man, I’m going to have to throw this one under the bus too”. But something about the game stuck with me and I found that I wanted to go back to it. For one thing, I wanted to try it with the android rules, which are effectively a variation on the Cylon/hidden traitor mechanic. But for another, I wanted to look at the game from a different perspective. Because Rogue Agent is not, come to find out, quite the highly detailed adventure game that you might think it is.

With measured expectations (and a couple of different players), I came to realize what Mr. Ausloos was aiming to do with Rogue Agent. Despite the very clear nods to Blade Runner and similar antecedents, Rogue Agent is really pitched more as a medium-weight Eurogame where resource management is balanced with some risk-taking, a little dice rolling, and some surprisingly nasty opportunities to interfere with other players. What’s more, I actually found that the higher degree of abstraction and lack of reliance on flavor text and background fluff actually made the overall setting feel more successful in some ways than Kevin Wilson’s Android. You have to work out on your own why your guy got busted up searching Rico’s Gas Station or why he completely flopped an attempt to bring in Eyon Six or Lola Bruise.

This is a much leaner and more direct game than Android. Your character’s only story is what he has to do his job, what criminals he brings in, and his record at defusing those bombs. You’ve got a resource tracking card that shows how much ammo, gas, information and so forth you have as well as what upgrades to your weapon and armor you’ve achieved. There are some simple mechanics that create a sense of environment. Precinct tiles have skull icons, indicating the degree of low-level thug activity. Unless the Police Squad miniature is there, you either take damage or you can spend bullets to shoot your way out of the bad neighborhoods. Or maybe you’ve got an informant on the streets there that gets you through safely. Criminals make the bombs tick down faster, and assassins will actually break out of their proscribed movement pattern to attack you or your hapless informants you’ve stationed in a precinct.

There is no overarching mystery to solve, all opposition comes from the “datastream”, a bag from which you draw tokens representing criminals and assassins that move automatically through the city and bombs that count down until they explode unless someone manages to get to them and disarm them. Over the course of the game, you’ll move through square tiles representing Rain City to accomplish “Justice” actions. These might be revealing and attempting to subdue a criminal, arresting a subdued criminal to take them in, searching the area (and rolling those search dice that I really don’t like), using information to look at an unrevealed criminal’s card, fighting an Assassin token or hijacking another player’s collar so that you can take him/her/it in for the bounty.

The goal of the game is to be the agent with the most influence (a really rather poor nomenclature for victory points) at the end, based on how many of the game’s diverse bad guys you busted, assassins you thwarted and bombs you deactivated. There really is not much of a cooperative angle here, apart from in the android mode where the android players are working at cross purposes with the agent players.

I really liked playing the basic game with more aggressive players that realized that intercepting bounties was a good way to get other players to do the heavy lifting before effectively stealing their collar. With more passive players, the game does feel less interesting and the shifting of cubes up and down the resource tracks feels more grinding. But the android mode is, I suspect, the way that most folks will want to play it and a couple of extra rules pay off nicely. The thing I like the most about the android rules is that you’re not given an identity at the outset. The android tokens you get only increase the possibility that you will be revealed as an android. So true to the Blade Runner theme, you’re not really sure what you are when the game starts. This is brilliant.

As an android mode game progresses, you might be forced due to game effects to show one of your identity tokens to other players and you can choose which to show. If at any point you’ve reveal two android tokens, you’re a dirty skinjob and your role is to attack agents and damage city locations. You might also have to reveal identity tokens if you are cornered by another agent and subjected to a scan action to reveal identity tokens. Blade Runner fans will recognize that as a Voight-Kampf Test. “Whaddya mean I’m not helping?”

So it took a good three games for me to come around to Rogue Agent. The first was a disaster, the second I had adjusted expectations plus a more aggressive group of three other players and in the third we did the android mode game and had a really good time with it. But I still feel there are some rough spots and over-complications that I really wish had been ironed out in development. The bomb defusing sub-game is an interesting concept, somewhat similar to the kinds of mini-games that were in Mansions of Madness, but it comes down to good or bad luck on big die rolls too often. The end game scoring is needlessly complicated, with players getting bonus points for having multiple members of one of the game’s syndicates. Some criminals have effects that trigger if they have been investigated by a player, others have effects if they have not been investigated. But neither state really adds to the story or gameplay.

I keep coming back to a Panic Station comparison, which was also a compelling mix of thematic mechanics that were near-brilliant and overcomplicated elements that were counterintuitive. But I think that, after just three published games, it’s pretty clear that this is very much the Ausloos style and it’s apparent that the Ausloos style can be pretty divisive. What it comes down to for me is that what I really like about this Ausloos style that is on full display in Rogue Agent is that he completely commits to a thematic vision and tries to make mechanics work with it, logic and sense be damned. Sometimes that’s awkward, sometimes it’s overly complex and kind of just makes you confused. But other times- when his games are really working, you kind of just give into his directorial concept and let it just work in the context of his rules and the environment he creates.