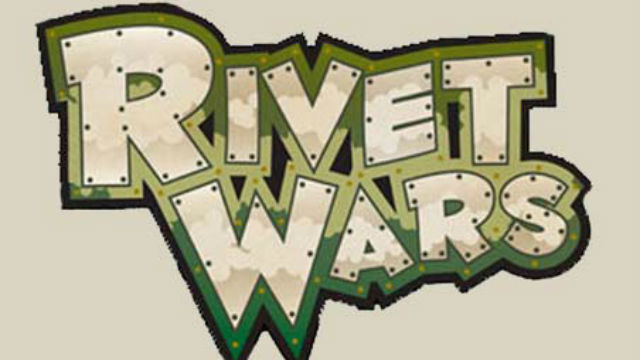 Hot off the back of a successful kickstarter campaign, I really wasn’t sure what to make of Rivet Wars. It channels a first world war theme, yet presents you with a wildly incongruous steampunk theme, rendered in a weird, chunky anime style. It claims to be a board game representation of a real-time strategy game but has no resource control. What is this bizarre oddity?

Well it turns out to be a pretty streamlined two player game of tactical aggression. You pick a scenario, assemble a board out of modular components then use an allowance of resources each turn to purchase from a selection of units and march them up to the front line to contest control of critical objectives with your opponent. To spice things up a bit, both players have secret missions to fulfil for extra points, and action card that allow units to do unexpected things.

Sound familiar? It should. It’s a re-tread of an awful lot of what’s good about tactical combat games generally, and particularly that feted classic Nexus Ops, right down to stealing its innovation of hidden missions that can be accumulated and cashed in for quick victory point swings.

But while thunderingly uncreative, I don’t want to be too hard on Rivet Wars. It does have a keen eye for what’s good about its predecessors and distils it down into an easy to learn, easy to play package. And it also makes a couple of minor tweaks to the formula to help it stand out, just a little, from the herd.

The first is the cleverly designed asymmetry. At face value, each player is picking from what looks like an identical roster of units. Both sides have infantry, cavalry, artillery and armour as well as a couple of characterful heroes.

But a closer look at the unit charts reveals some fundamental differences. Allied infantry, for instance, are very good against other infantry but utterly powerless in the face of any kind of vehicle. Their Blight counterparts, by contrast, aren’t great any anything, but make a decent fist of combat against other troops or light armour alike.

Some of these differences are quite stark: while the allies have a useful all-round artillery piece, the Blight have a motorised machine gun, which is very powerful when it comes to mowing down waves of enemy infantry but completely useless at any other job at all. Attack one with even the flimsiest of vehicles and they can’t fire back, merely hold their ground and hope for the immanent arrival of support troops that can deal with the threat.

The game makes the most of this asymmetry to add lots of tactical interest and fun to the game in terms of squaring units off against each other with differing capabilities of firepower and manoeuvrability.

However, it can’t quite compensate for what are otherwise brute-fore combat mechanics: fistfuls of dice, hitting on fives and sixes. The clever interplay between secret missions and power-up cards that made Nexus Ops such a joy is pretty much absent here. You scrabble to fulfil your missions as fast as possible, slapping them down for extra points so you can draw more. 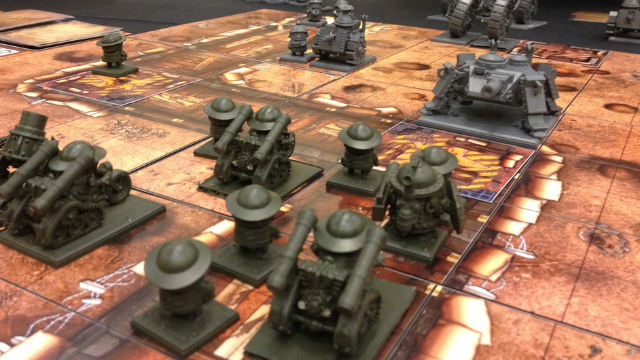 The second interesting thing is the theme. Now, when I first pulled this thing out of the packing, I was pretty aghast at what it appeared to offer. It was an obvious and rather weak pastiche of the first world war, a conflict fought in conditions so appalling that the horror still resonates a century later. And to add insult to injury, the chosen art style was an awful cutesy cartoon rendering, “chibi”-style, that turned everything round and fat, so that chubby-cheeked infantry faced off against jolly rotund tanks.

Yet, in some miracle of engineering, the sculptors who worked on the components managed to turn that vile artwork into quite astonishingly brilliant miniatures. As many of you will know, I was a miniatures gamer before I was a board gamer, so I know a decent set of sculpts when I see them. And the Rivet Wars figures are some of the best I’ve ever seen in a game: brilliantly stylised into lifelike statues of their nasty two dimensional counterparts and rich with vibrancy and detail.

I found out after playing that Rivet Wars actually started out with that stylistic art, and is slowly evolving into a host of related media. If so, then it’s a bad beginning for what’s actually a fairly decent game. It might be derivative and it might be dumb, but it oozes with a sense of confident evolution, of slow organic growth into something that knows it might not be perfect, but knows it’s fun all the same, and is intent on thumbing its nose at all the prim, prissy, over-developed titles that it’s destined to share a shelf with.