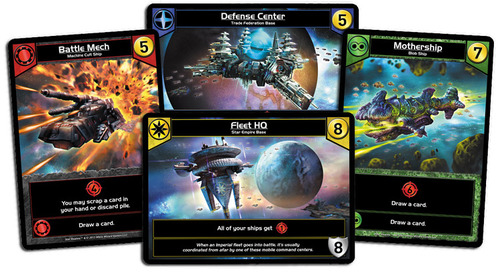 When talk of Star Realms, a new deckbuilding game from a Magic Hall of Famer (Darwin Kastle) and one of the guys behind Ascension (Robert Doughtery) started making the internet rounds, I can’t say that I was profoundly interested. We’re now in Year 6 A.D.- that’s After Dominion- and it takes a lot to get me interested enough in a deckbuilder to pursue it. Ascension is pretty much my go-to deckbuilder, but I strictly play it on IOS. I like Dominion and I just traded my way into a pretty large set, but it’s never requested by my gang these days. I had a torrid fling with Legendary, but it was ultimately just too flawed (and ugly) to hold my interest. Most of the others on the market have momentarily held my attention at some point, but these games always tend to leave me wanting more- and not just another expansion.

But the word on the street was that Star Realms was good and the price on the street was even better- this is a game you can pick up for $15 at a FLGS or for about $10 from an online discounter. I’ve been very interested lately in games that deliver big bang for the buck and that come in small packages, especially now that it is quite clear that the “Coffin box” era has passed and some publishers and designers are smartly looking at ways to do more with less. I didn’t feel like $15 was a big enough risk to keep me away from trying a potentially good new card game, so I picked up a copy.

I’m glad that I did, because Star Realms is now my favorite deckbuilding game. Star Realms is what a highly refined, carefully studied and smartly developed game working in a specific mechanical space looks like. More than that, it is by far the deckbuilding game that most feels like playing a classic CCG. As in most games in this genre, the general idea is to build a deck during the course of the game that produces incrementally escalating resources. But you’re not buying VP cards or scoring arbitrary points for your success- you are pointing spaceships at the other player with malicious intent.

Star Realms brings direct combat to the deckbuilding table in a smashingly successful way. Starting with a typical seed deck of eight Scout ships and two Viper fighters, you’ll draw five and play what you’ve got to generate resource points or attack points in a space battle between two or more players. The resources you’ll spend to buy cards from a five-card mutual market or an always-available, low-cost Explorer ship that generates resources and can kamikaze for an attack value. The attack points you’ll use to lay into your opponent to chip away at his 50 “authority” points. In the old days, we called ‘em “life” points.

Nomenclature aside, what happens that is so exciting in Star Realms is that there is a pronounced sense of escalation and rising stakes. It’s much more thrilling to be in a race to generate more damage to the other guy than it is to subtly make an extra VP per turn. If you want to win, you’ve got to beat the curve the other player is generating as damage values get higher and higher each round. Tension is high, and there is no other victory condition. Kill or be killed.

There are some other genius pieces of design gracing Star Realms. There are Base cards, similar to Ascension’s Constructs, that are semi-permanents that you can play and they give you resources, attack points, authority or card draws each turn. Some are labeled Outposts, which means that your attacker must assign damage to it before they can get to you. In Hearthstone language, they are effectively minions with Taunt. The catch is that you’ve got to blow these up in one hand to destroy them- damage doesn’t carry over.

There is also a great concept regarding that now time-honored tradition of deck-culling. There are the usual cards that let you trash others to pare the deck down, but there are also optional scrap abilities on some of the cards and bases that you can use once played. So it may be a strategic decision to scrap a base to get an extra two resources to draft a powerful ship that meshes well with your build. Or you might scrap a ship to get the extra damage you need to destroy a troublesome Outpost and win the game.

Combos and deck synergy are hard-coded into the game. There are four factions, and each has different strengths or weakness. Many faction ships have a bonus effect that occurs if your play for the turn includes another ship of the same faction, which means that there is a greater impetus to focus on one or two factions to get the most out of your deck. The Trade Federation is good for developing an economy and recovering authority. The Blob eats cards from the trade row and have some strong attack capabilities. The Machine Cult is big on bases and the Star Empire is all about cycling cards. Ascension had a similar concept of factional specialization, but Star Realms does a far better job of making the distinctions feel meaningful and complementary. It feels tighter than Ascension in general, but like Ascension it seems to play best head-to-head and it clocks in around 20 minutes once you get going. You’ll want a rematch or three.

One box of Star Realms is all you need for two players and every one you buy beyond that can add two more players to the mix. I appreciate the economy in marketing and packaging this game- just two or three years ago, Star Realms would have come in a large box with superfluous counters and a board, retailing for $40 or more in a box full of air. This little pocket-sized package literally has everything you need to play. You don’t even need a pencil and paper or a die to track authority because it comes with a set of cards to handle that for you.

I liked the game enough to buy another set for four player games and also the “Gambit” mini-expansion that is available through the publisher via Amazon.com. It’s a comparatively overpriced $10 set of cards that adds a neat Gambit mechanic, whereby each player can draw an agreed-upon number of Gambits before the game begins. These are secret one-time or persistent effects that can change the flow considerably. The set also includes a couple of solo challenges which are fun but a touch too easy once you’ve cut your teeth playing against a life opponent. I’m definitely looking forward to more expansions, but I do wonder if when the inevitable IOS game hits if I’ll ever pick up the cards again. Even if not, it’s a game I’m happy to have on my shelf.

The illustrations are great, the conflict-oriented gameplay is hot and the price is right. It’s written on a single page of rules with very little ambiguity or confusion. Star Realms succeeds at doing more with less. It’s a leaner, better deckbuilder than anything else out there right now.