I missed out on Z-Man Games’ Pocket Battles series the first go around. This set of small box, low complexity wargames saw print from 2009-2012 but then they blinked out of print, with at least one of them (Macedonians vs. Persians) appreciating substantially in the aftermarket. The three original games- all designed by Paolo Mori and Francesco Sirrochi- are filtering their way to retailers along with a new title, Confederacy vs. Union. Z-Man was kind enough to send me a review copy of the Civil War set, so after some time with itI can issue forth on what has become something of a cult classic.

These games- which are in some ways the modern equivalent of the old “microgames” from the 1970s and 1980s- retail for $15 and come in a box that is actually small enough to fit in a pocket. Uniformly , each set features two armies with three sets offering historical match-ups and the fourth fostering the longstanding racial hatred between Elves and Orcs. All contain 60 small counters split between the two armies, some dice and a small rulebook. All are completely self-contained but can be mixed and matched at your leisure, in case you want to see the Celts square off against the Union.

These are true microgames with minimal components, a 20-30 minute playtime and requiring very little table space. The rules are fairly simple, overhead is low and action is high. But there is more depth than is immediately apparent beginning with the way armies are constructed. It is a point-based system and once you’ve got the troops you want, you stack them together into units in three battlefield sectors each with a forward and a rear section. Units stacked together support each other and may impart special abilities. Differentiation between infantry, cavalry, artillery, auxillaries, elites and command is pronounced and there are any number of ways to field an effective army and in any number of strategic placements on the battlefield. It’s also entirely scalable, so you can do smaller or larger battles. It’s up to you, and in fact building armies is a major element of the game.

Which may be something of a liability, because it can feel like building an army takes longer than it does to wipe out half of the other side’s total army value to win the game. Once the game gets going and units are charging to engage and getting shot to pieces before they melee, artillery units blasting away from the rear lines and cavalry rushing in to save some infantry bacon it moves at a quick clip. It’s extremely straightforward, even more so than other light wargames such as the Commands and Colours series.

Each side gets an order token for every ten points of troops fielded. On a turn, you place an order token on a unit of stacked troops and they get to take an action- make a tactical move across battlefield sections, charge, continue/retreat from melee, take a shot or use an ability. Combat is simple- you generally roll a die (two if you charge) and compare the result against to-hit numbers on each troop in a unit stack. This is a neat concept that loops back to the importance of building good stacks during setup. Some units might hit multiple times on a single result or you might have made a unit during army construction that pairs or triples up hits on certain numbers. There is a strike back phase in melee, so engagements can be vicious.

I especially like how unit attrition, losses and reductions are handled. If you take a hit, you can either elect to apply a wound to a unit (provided it has more than one health) or you eliminate one troop out of the unit. The catch is, when you choose to apply a wound to keep an elite unit in the game, you have to flip over one of your order tokens and it stays on that unit. So in a 50 point game, making the strategic decision to keep a unit in the fight will reduce you to four available activations in the next round. But that also keeps you from giving points to the enemy, so it’s always an important consideration.

As for historical flavor, I’ve only played the Civil War game but I felt that it reasonably represented the kinds of battles you’d expect to see from that conflict. It is important to note that this game is in no way a simulation, it is an abstraction (with detail) of battle. But that detail is important. There are multiple types of artillery, for example, that have varying strengths and weaknesses. The Union and the Confederacy do not have the same units and each side displays very specific characteristics that can be exploited in both the setup and during the battle. There are no terrain effects or complex command issues, no coherency or supply lines, nothing like that. 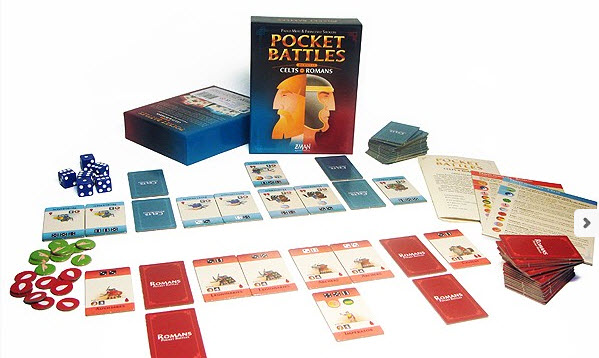 Pocket Battles is best approached as a very casual wargame along the lines of Memoir ’44 or Manouvre. It is simple, but there is ample grist there to give it some really fun depth- particularly when players know the system well enough to make informed decisions about army construction and take advantage of tactical possibilities. When I was getting into Pocket Battles I had a chance to get together with a good friend of mine that I used to play a lot of more complex wargames with and we had a great time over a couple of sessions at a coffee shop. By the third game, I felt like we had a good handle on building effective units and maneuvering on the battlefield. But the first game was something of a wreck- we played with too many points and really kind of had no idea what we were doing, particularly in regard to the support units. Who put that drummer in there, anyway?

So there is something of a slight learning curve and it does require a little more commitment than expected, but I don’t think that does much harm to what is ultimately a very appealing, very accessible wargame option. As something of a lapsed wargamer myself I find that the Confederacy vs. Union set in particular puts me back in touch with that segment of the gaming hobby but without pushing me away with levels of specificity and complexity that I am not currently interested in engaging. And at ten bucks street, these games represent a tremendous value and another great example that today’s awesome games aren’t necessarily the ones coming from $100 boxes stuffed with junk.