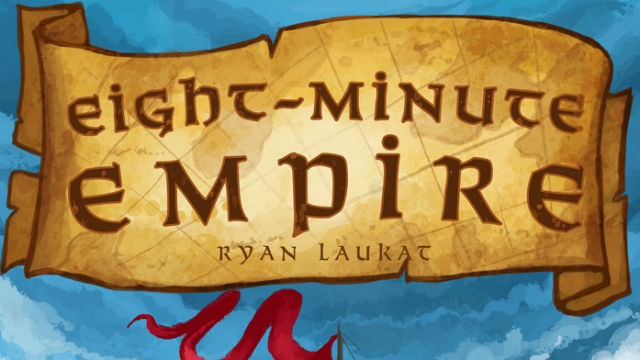 Of all the lies that are told in the context of board gaming, the biggest and most odorous are those printed on boxes alongside the legend “playing time”. Yet even amongst this exalted company, Eight-Minute Empire reaches new heights of outrage. Whatever it says on the box, the rules inside freely admit that it’s probably three whole times as much as claimed, and my experience supports that.

Of course, that’s still only twenty to thirty minutes. So I might be over-egging this pudding just a little.

The game itself is aggressive area majority that’s been stripped and distilled, stretched and squashed right down until only the merest essence remains. But what’s perhaps surprising is just how much of the genre remains fun and interesting after such extensive manipulation. And it’s a testament to the designer that he managed to make it so.

Here’s the deal. You pick one map from the two-sided board and all the players pile some army cubes in the middle and grab a handful of cardboard coins. Then you lay out six cards, each of which has a resource and an action, such as recruiting more cubes, moving cubes, or building a city which allows you to start recruiting armies elsewhere on the map. The leftmost card is free, and they get gradually more expensive as they go right. You pay for one, perform the action, and pass to the next player.

So far, so ordinary although you’ll probably already have noticed how this neatly captures a whole bunch of interesting European-style decision making agony in a tight, easy framework. But the really smart design is in the scoring. A point for each area where you have the most cubes, a point for each continent where you have the most areas, and a slew of bonus points for collecting sets of resources on the action cards you’ve picked.

It took me two paragraphs to explain that. It takes the rules about two pages to flesh out the detail and you can explain the game in roughly two minutes. So you’ll have to trust me when I say that there’s a metric ton of game contained in that duality.

Take a look: there’s multiple ways you can win. The conflict averse can try and spread themselves thin, and go for resource sets. The angry and brutal can build up to crowd out other players or make use of the occasional action cards that allow you to remove enemy cubes from the board. Both methods can benefit from cunningly wrought table banter, but the game still works without it. To win with either approach takes a careful eye for managing your gold reserves and for picking the right cards at the right time. 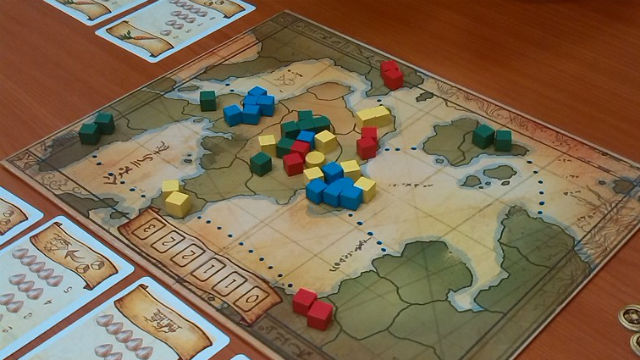 If that were not impressive enough, there’s a short array of variants to enrich your time with the game, alongside having two maps on the board. All are predictable simple, and two are pretty meaningless, but the third makes a significant difference in how you play. It adds resources to the board as well as the cards, giving some territories more value than others. This, naturally, causes a lot more fights and is therefore highly recommended.

Sadly it’s not all joy and roses. Aside from each new action card which comes out, joining the queue in the most expensive slot, there’s no randomness so it’s a very deterministic game. And all the information is public, so it’s possible to calculate and re-calculate the scores after every turn.

That makes it excruciatingly prone to analysis paralysis, yet on no account must players be allowed to indulge themselves in this. Even if the title is a massive lie, the game derives much of its appeal from being taut and fast: a surprisingly weighty and engaging title that’s still short enough to open or close an evening. Slow and careful play is anathema, and will ruin everyone’s fun. Although if any of your opponents can’t work this out for themselves while playing, you probably need some new gaming buddies.

It’s not great with two players either, requiring them to set up a third, dummy player to hold some territory. And it obviously loses some

Some people have lumped Eight Minute Empire in with the burgeoning craze for microgames. That’s perhaps unfair: it’s a smidgen less accessible than games like Love Letter, it has a board, and the box will certainly not fit in your pocket. But such semantic details are dull: it’s a close cousin, and whichever way you call it, it’s the meatiest and mightiest microgame I’ve had the pleasure to play.