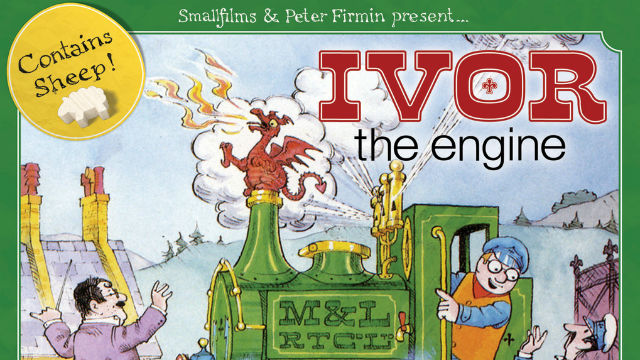 British people of a certain age tend to regard children’s animators Peter Firmin and Oliver Postgate as minor deities, so totally did their wonderful conjurations dominate the world of kids TV in the 70’s. Dizzying edifices of imagination and storytelling, built on Firmin’s instantly recognisable art and Postgate’s incomparable animation, they remain a colossal founding pillar of my childhood.

Now here there is a game, a modern game, based on my most cherished of all their creations: Ivor the Engine. It’s here, in my hands. This is going to go very well, or very badly.

The first thing that comes out of the box is the board, newly illustrated by Firmin who has clearly lost none of his touch with the passage of the years. On it are all the locations from the cartoon, set down in relation to each other and joined by joyfully shaky train tracks. If anything could kick my nostalgia buttons any harder, it would physically hurt.

Underneath there are sheep. Lots of lovely wooden sheep.

So, one of the teeny, tiny five minute story arcs from the films was of Ivor and his driver, the unflappably innocent Jones the Steam, collecting lost sheep and this forms the basis of the game. Wooden woolies are randomly distributed across the board at the start of the game, and players move their wagons around, rescuing one sheep from their current location at the start of each turn. You can burn coal cubes for extra movement, and gold cubes for extra coal or hoard them for extra points at the end of the game.

At the end of each turn they are forced to take a card from a face-up selection. These have two purposes: you can either use the special ability, like a bonus move, or visit the location printed on the card, fulfilling an imaginary job like bringing coal to Mr. Dinwiddy the gold miner, for some bonus sheep. But there’s a catch – you can only cash in jobs for locations devoid of wandering sheep.

It’s a sweetly challenging framework for younger gamers: easy to learn, simple to play but with just enough strategy to challenge and stimulate tweenagers. It’s surprisingly diverse, too. While the building blocks are hewn very obviously from the European school of ploddingly mechanical game design, there’s just enough friction, in the form of players blocking each other into corners of the tight board, to keep things interesting.

The problem is that whil those self-same building blocks make a solid foundation for a game, they’re poor moorings for any kind of story, and stories are critical to the appeal of Ivor. With them, it’s a magical corner of an wistful Wales of the recent past, full of wonder and pathos. Without them, it’s nothing but pretty pictures on a piece of cardboard.

There are so many failings in the game’s attempt to conjure Ivor that it’s almost painful to list them. Multiple players need multiple engines, instead of the one so central to the TV series. Cashing in cards with words on them for extra sheeples doesn’t in any way equate to the humour in Dai Station’s jobsworthness, or the simple joy of watching Evans the Song weave beautiful music from his choir. The game promotes competition, while the people of Llaniog rejoice in sharing and friendship. 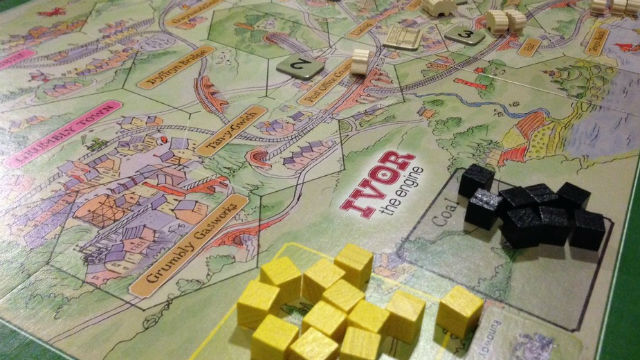 The job cards try a little harder, but they’re just text and pictures. In amongst the job cards there are also event cards which feature famous moments from the show like Nell the Sheepdog’s rescue of a particularly foolish ewe. But like almost everything else in the game these offer cracking mechanics but little emotion: you can pick them from the card stack to trigger the event effect, a matter of strategy and timing which often gives you the chance to stick one over on the other players, but the bare bones mechanics can’t conjure up the playful narrative that’s the heart of Ivor.

There’s no better example of this dichotomy than the fact that you’re forced to pick up a job at the end of a turn, and if you go over your hand size, you’re penalised by one sheep. Mechanically, this is sold stuff: it keeps job cards moving through the game and provides a big incentive to players to get those sheep cleared. But even leaving the magic of Ivor behind for a moment, it makes no real-world sense. Why do you have to pick up another job? Why does a job sometimes weirdly equate to extra coal instead? Why do you lose sheep if you have too many?

Some may feel I’m flogging this too hard: no mere board game can realistically expect to capture the wonderful, whimsical spirit of Ivor after all. And that’s true. In which case, why try? Why not release what’s otherwise an excellently designed family train game instead?

I shouldn’t be too hard on Ivor the Engine. As a family board game it’s really rather good, a nice balance of strategy and excitement. My original fear was totally misplaced: it went neither very well nor very badly, but is in fact a very fun game with a very weak theme. The trouble is that that theme tramples heavily on an awful lot of my childhood memories. Tread softly, because you tread on my dreams.

One thought to “Ivor the Engine Review”