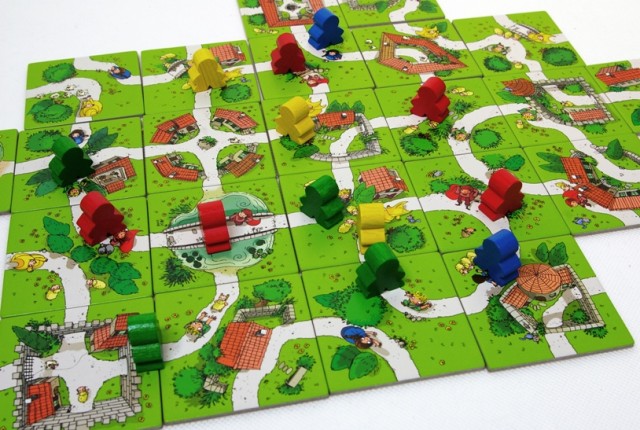 My First Carcassonne is Z-Man Games’ new reprint of Kids of Carcassonne and as either title would suggest, this game is a junior-sized version of Klaus Jurgen-Wrede’s classic tile-layer. When the game was first released back in 2009, I didn’t have children. But in 2014 I have a four-and-a-half year old boy and an almost three year old girl. River and Scarlett are already playing lots of different games (as long as they’re not too “domplicated”) ranging from the usual Haba and Ravensburger suspects up through titles as complex as Rampage and Zooloretto with a little help from dad, of course. But of the games I’ve played with them, I don’t think any of them have been as big a hit as My First Carcassonne. It’s rare that I get to play a game over 20 times before committing to a review.

Reworked by designer Marco Teubner, the classic Carcassonne gameplay is stripped down to a core lay a tile, lay a meeple village-building process. The more complicated elements such as the proto-worker placement mechanic, multiple scoring methods and wide range of tile variations are pared away to make it suitable for kids as young as four according to the box, three according to this dad. The big tiles have one very different feature from the original game- they all fit together, no matter what you do, road to road. On each road, one or more children corresponding to player colors may be depicted. When a tile is laid that completes a road (meaning it runs from a village building to another one, a well, a chicken pen or other feature) then each player gets to put one of their meeples on the pictured kids that match their color. The idea is to get all of your meeples on the board to win.

This takes about 20 minutes with my kids, but that includes time to make up stories about what the children are doing, to fiddle around with the pieces, and to remind Scarlett that she can’t put a tile back to pick up another one. More advanced kids could probably complete a game in ten minutes but multiple plays in one sitting are quite possible. Parents surely understand the “one more time” demand.

But the good news is that the game is really fun to play with small children and it is absolutely not a drag. It’s pitched just right with just enough rules for there to be an actual game but without overloading young minds with the kinds of rulebook folderol us older folks have had a few decades to get accustomed to. The process is practically fail-safe, and it is easy to instruct kids as to what “good” plays are and what won’t help them. River will want to put a tile somewhere just because he likes the way it looks but when I explain that he’ll help another player score or that he’ll miss a chance to put one of his meeples out he immediately understands the simple strategy. Scarlett requires a little more help, but she has started to grasp that putting together roads with multiple kids of her color (red, of course) is the way to go.

There was one instance in our last game that I thought was pretty interesting. River always plays blue, so he played a tile that had a blue and a green kid on it that closed up a road. I said “River, that is going to give you a point but it’s going to give me one too so you might want to do something else.” He said “no daddy, I want to help you.” I stopped for a second and the gamer gene kicked in and told me “my son is actually negotiating with me.” But then I realized that he really just did want to help his dad get a point too, no strings attached. That was such a sweetly innocent little moment; I just had to help him win the game with a tile I played later on in the game.

My First Carcassonne is a family fixture at this point, after only owning it for two weeks. The kids seem to always want to play it (they call it “the village game”) and even when we’re not playing it together Scarlett likes to set up the tiles and put the children in the village she’s built. The artwork is really good too- very modern, colorful and appealing. When I showed them the box, they both were very excited and interested before the shrinkwrap was even off it.

As for those readers without children wondering if this is one of those kids’ games that adults might like too, I don’t think that the magic would really be there without kids at the table. It’s an extremely well-considered distillation of a very successful design, but it is firmly aimed at the young- not so much the young-at-heart. A table full of adults plays games very differently than kids would and it could come across as much too simplistic- they’d be better off playing the basic Carcassonne game. But if you do have kids or have kids in your family under ten, this is one of the best games for that audience that I’ve played.

3 thoughts to “Cracked LCD- My First Carcassonne in Review”