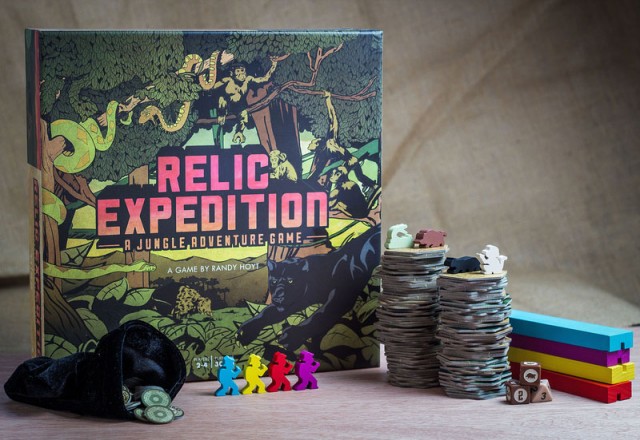 Foxtrot Games’ first release, Relic Expedition, is a great looking game. The graphic design is striking, modern and everything from the color palette to the layouts to the font choices shows good taste. Along with a basic rulebook, it also includes a sort of diegetic, pocket-sized “field guide” for the game’s more granular rules and it features some really nice naturalist-style illustrations of the various animals that menace or harass the jungle-jaunting adventurers. The equipment tokens all look like embroidered merit badges. I even love the company’s logo- a stylized, geometric fox head. But looks aren’t everything, and I can’t very well give Relic Expedition the nod if the quality of the gameplay doesn’t match up with its pulchritude.

Relic Expedition wears its inspirations on its sleeves, and this is not necessarily a bad thing because those influences are classic family games such as the venerable Survive and more recent adventuring/expedition games such as Tikal, Goldland and Lost Valley. I like the adventuring/treasure-hunting theme a lot and in fact I approached designer Randy Hoyt to ask for a review copy specifically because this is a kind of game that interests me. I was also drawn to its description as a simpler, more family-oriented game.

That’s exactly what Relic Expedition is, and I think one of the highest compliments I can pay it is that it could very well have been some long-lost Parker Brothers game that was a childhood classic for kids in an alternate 1984. But that also means that it has some kind of shaky old fashioned rules that are not quite as refined as I’d like to see. Two to four players set out into the jungle from a home base tile to recover four relics of a like symbol or like color. As the jungle is explored by the explorer meeples, hex tiles are added to it which may introduce altars that can be plundered for relics, quicksand or poison ivy hazards, helicopter landing areas for a fast travel option, or animals. There are also four entrance tiles in the stack of 96 that introduce large relic-rich areas into play- a cave, a river, and a mountain. These require that the explorers have special equipment to enter and explore them, a lamp, a raft, and climbing gear respectively.

But that gear- along with machetes, vines, first aid kids, sleeping darts, traps and bananas- takes up space in an explorer’s backpack, which is represented by a wooden rack with eight slots. And any relics you find also take up space so room in the backpack is at a premium later in the game. You’ll need that vine to swing over the quicksand, the first aid kit to keep from losing a turn scratching in a poison ivy patch and a machete to chop through dense jungle bordering some tiles. And you’ll want those traps and sedative darts to keep the boars and panthers at bay. The banana? You give it to a monkey to keep him from stealing things out of your backpack.

Process is simple. You roll an action die and an animal die. The former gives you two to four actions, the latter indicates which kind of animal you get to move to pester another explorer. Each animal has a slightly different effect- the boar knocks an explorer down and makes them drop everything, the snake causes a lost turn, the monkey steals unless you give him that banana and the panther sends you back to base camp. As for the exploring portion of the turn, you’ll be using those actions to move from tile to tile, adding new tiles when you are at the edge of the expanding map. The other prime action is drawing a random supply token from a bag.

Modern gamers spoiled on luckless determinism and ironclad balance will likely cock an eyebrow at a couple of things in that preceding paragraph. One is that your number of available actions is random. Another is that the supply token you get from the bag is random. Still another is the random draw of jungle tiles, which might mean you wind up on the other side of the map from all the relic locations. And yet another is that those animals- randomly activated- can seriously waylay an explorer (most likely an explorer in the lead) if they keep getting nailed by an animal that they just can’t get away from and don’t have the right piece of equipment (again, randomly drawn ) to stop it. Oh, and then there’s the winning condition. If the randomly placed relic you’ve spent a couple of turns hiking across the board to get to isn’t one you need, you’ve wasted your time.

Now, here’s the deal. I don’t mind randomness at all and I actually welcome it in lighter family games. I love dice, and I love take-that gameplay. But when those things make a game frustrating or create a situation where a simple game overstays its welcome as players struggle to squeak through a gauntlet of random elements and player-driven leaderbashing to win, then there’s something not quite right about the design.

I feel like there a couple of things that aren’t quite right about Relic Expedition, but there is a light at the end of the tunnel so stay with me. Above I noted that the game felt unrefined, and I think that’s really the watchword for the entire design. The random elements could have easily been mitigated by a couple of simple changes in the rules writing. Why not draw three items out of the bag? Why not place the relics face up so players can plan on a path through the jungle? Why not send an animal back to its home tile after it does its damage? I’m sure these things were considered in playtesting, I’m just not quite sure why decisions were made to go with less stable and often frustrating rules.

I’m not one to play by house rules, I prefer to play games as written because I have faith in designers and I respect their final versions. But I have to say that Relic Expedition is practically screaming for some at-the-table tweaking. I’ve pretty much made the changes stated above permanent, and I suspect that other players will find that the game is malleable enough to take on variants without interfering with the as-published design too much. There are also a couple of sold separately/Kickstarter bonus expansions, including variable missions instead of the four-of-a-kind, unique adventurers and village/market tiles that allow for trading of supplies and relics. These should have been included in the base game because it feels like it not only needs those options out of the box, but it could also use a touch more content.

It may be a little light on substance, but it is an easy game to recommend for playing with children. I’ve got my almost-three-year-old and my four and a half year old playing it with help and they love exploring the jungle and finding the treasures. As for myself, I enjoy it too despite reservations. I like swinging over the quicksand pits, rafting down the river and revealing that banana token when somebody sticks the monkey on me. It’s a fun game- very light, not at all serious. There’s a bit of a mean streak in it that I appreciate, and I like the core concept of hazards and countering equipment as well as the simple “backpack” limitation. The “feature” boards are a great idea and there is a great sense of discovery when you find the base of the mountain or the mouth of the cave.

Serious-minded gamers are going to bemoan the simplicity and apparent lack of depth. But I also would not recommend Relic Expedition to more serious-minded gamers at all. Not because I think this is a bad game (it isn’t), but because they are just not going to appreciate it. However, for fans of Survive-style games there is definitely plenty here to enjoy and I think those who come into it expecting something in that vein- and something similar to family games of that era- will get a lot more out of it.