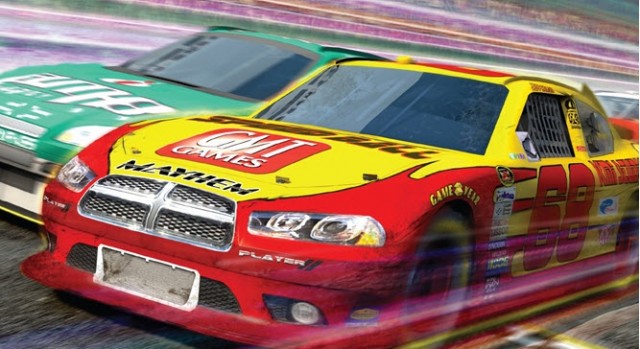 Thunder Alley is the new NASCAR-style stock car racing game from GMT and in the blink of an eye this 250 MPH masterpiece has become one of the best racing games that I’ve ever played. It’s a brilliant piece of design that nails down the most important elements drivers at Talledega or Daytona experience while also creating compelling spaces for tactical movement decisions and coordinated, team-focused gameplay. It is a design clearly descended from Wolfgang Kramer’s card-driven race designs, wherein cardplay often demands that players weigh the decision to move cars that are not their own in order to gain ground themselves.

This kind of gameplay based around mutual movement also creates an important sense of pace and forward velocity that sometimes feels like you’re right on the edge of losing control. It’s exhilarating, as far as board games can possibly be, to pull off that perfect play where you pull out of the pack with a couple of drafting teammates and put your cars into the lead with tires burning and transmissions screaming in denial. But then on the next turn someone else nudges you out of the way and you fall back. Indeed, rubbin’ is racing in Thunder Alley.

The genius of Jeff and Carla Horger’s design lies in smart decisions to effectively abstract the subject matter down to a couple of core elements that completely sell the stock car racing concept without bogging down in detail or the kinds of cold calculation that slows other racing games down. I tend to generally feel that racing games should be fast-paced and focused on track action, and this game manages that quite well although with more than five players (it plays up to seven) it can run a little long. But even with seven players, the turn-to-turn gameplay is so accessible and consistently exciting that the longer-than-expected playtime isn’t much of a liability.

Unlike almost any other racing game out there, this one actually scales down to two players without losing much. With more players, the game feels wilder and woolier because there are up to 21 cars on the track at a time. One of the most important concepts in Thunder Alley is that you’re not controlling a single competitor as is the case in just about every other racing game out there with the notable exception of Um Reifenbreite, a Spiel Des Jahres-winning team cycling game that may have been something of an influence on the Horgers’ design. You’re in charge of up to six cars on the track at a given time, and learning to coordinate their movement, manage your hand of cards, and time each car’s activation are core competencies.

Despite there being so many cars on the track and an ever-changing board state this is, rules-wise, a simple game where all you do on your turn is play a card, move a car or cars, and flip it over to show that it has been moved. Each card offers one of four different types of movement and a number of movement points, sometimes with a knock-on special effect that might cause you to drift or allow for a diagonal move, for example. Solo movement means that you move a single car with no drafters- ideal for charging forward at a crucial moment. Drafting moves an entire line of cars- you can be the next to last car in a line and a draft move will move everyone in the line with you. Pursuit movement is similar to drafting, but you leave anyone behind the moving car in the dust. Lead movement lets you pull cars out of a pack and they’ll follow your racing line. Lateral movement (lane-changing) is fairly free, and there are no kinds of rules to meter speed through corners. It’s just not about those kinds of things, so along with the enormous lap counts of NASCAR races elements such as those are wisely abstracted.

But it wouldn’t be a game with that NASCAR atmosphere if there weren’t a healthy dose of paint-trading so there are significant rules for displacing cars both laterally and in front of you. Displacement can knock a rival out of a pack or there are some cards that let you effectively push your way through a line. It costs extra movement points, but it’s a critical strategy considering that the tracks have four lanes at most and some narrow down to two in tight banks.

Endurance and wear is another critical element that the Horgers smartly preserve without overdoing it. Most movement cards cause the car to incur wear on the tires or suspension, reduce fuel or cause some kind of permanent damage that can’t be repaired. As cars take on three or more wear chits, they suffer a penalty to any movement points provided by a card- although they can still be pushed and pulled by other cars, which is again where teamwork among your cars is crucial. Six damage chits puts your car out of the race, but at the end of each round of play there is an option to pit- a simple procedure where you move the pitting car down to the apron and back five spaces, remove non-permanent damage chits and then play a reduced movement card in the next round to get back in the race. Each type of damage is functionally the same- until an event card tells you otherwise.

The event cards cover a lot of specific details simply and effectively. One is drawn at the end of each round, and their effects can be dramatic. Some events will cause the car with the most of a specific type of damage to convert a regular wear chit into a permanent one. Or they may take a car completely out of the race. Some events cause a yellow-flag restart, which can be a tremendous field-leveler if someone is running away with the race- or about to get lapped. Drawing two Rain event cards after at least one lap is completed ends the whole thing right there. And of course, there’s always a chance of a massive pile-up.

Four tracks are generously included and each offers a different experience. Each is completed in two or three laps (which, again, abstract far more than that) and there are points at the end assigned to each finishing position as well as bonus points for the cars that hold the most lap leader chits, indicating rounds in which the car was in the lead. That’s a smart incentive to gun for the lead each round. When the checkered flag is waved, you can win first place and still have your team lose the race if your other cars didn’t finish well or if your overall performance was subpar.

Win or lose, I love playing this game. Some will undoubtedly bemoan that the situation changes each time a player moves in such a way that advance planning of cardplay is pretty much impossible, especially with many players. But I like the seat-of-the-pants approach and I think it reflects really well the kinds of second-to-second decisions race drivers have to make. This is a wholly tactical game, but with that said the strategic angle is definitely there. Deciding whether or not to pit a leading car with two wear tokens or let it go to the next round can be agonizing. Playing a high-value movement card that’s going to put a second tire wear chit on a car could give you an advantage or it could destroy you if the wrong event card comes up. You’ve got to make long-term decisions about what cars you’re going to push to the limit and which you’re going let slip. And there are always opportunities for your cars to piggyback movement and wind up in better positions for the next round.

If there’s one area where Thunder Alley disappoints, it’s in one that has nothing to do with the top-notch gameplay, production or overall value of this product. It may not even be anything that GMT can do anything about. But given GMT’s track record of really great historical notes and background material, I’m a little disappointed that the game doesn’t do much to explain the history of stock car racing, NASCAR, facts about real-world tracks or anything like that. But in order to accomplish that, I’m sure a NASCAR license would be necessary and I’m I’m guessing that would likely be very expensive and out of reach for an fundamentally small publisher of hobby games to approach. So the tracks have ersatz names and the teams are all full of made-up drivers in cars with phony liveries. This is a shame, because this is the definitive NASCAR/stock car racing game and it deserves the prestige- and attention- that would come with the license.