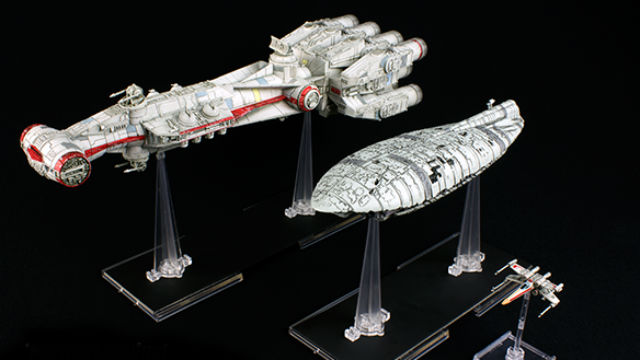 We’re used to seeing massively overblown adjectives in game marketing, so much that we probably tune them out automatically. But when Fantasy Flight decided to describe the new big ships for X-Wing as “Huge Ships”, and the play formats that include them “Epic” and “Cinematic”, they weren’t kidding. These things are colossal.

Indeed the Tantive is so enormous that I actually felt embarassed getting it out and putting it on the table, as though I were some rich kid with a box of ridiculously overpriced toys flaunting it in front of his friends.

Which I was, of course, but that just made it worse.

It didn’t help that the Tantive is the uglier of the two models. That’s not FFG’s fault, of course, it’s down to the people who designed the ships for the film. The Rebel Transport is sleek and compact in comparison, and has a lovely assortment of multicoloured containers on its underside. Both, in common with their more modestly scaled companions, are wonderfully sculpted and painted.

For all its clumsy looks, the Tantive is, however, arguably the more interesting ship. But before we look at that, we ought to briefly examine how these things play.

Big ships mean big changes. These beauties have their own special movement templates, range rulers, upgrade decks and all that jazz. From a mechanical point of view there are two stand out changes. The first is that they’re treated a bit like two inter-connecting ships, with the two bases supporting each model translating to a “fore” and “aft” section, each with its own damage deck. In the case of the Tantive this is taken to the extreme of having two ship cards, each with its own upgrades.

The other significant difference is the use of energy tokens in place of weapons. These are an extra resource, accumulated each turn depending on maneuver selection. They can be spent on various interesting things like replacing shields, automatic evade results and perhaps most interestingly granting a free action to nearby friendly ships. The choice of what to spend these on – or, indeed whether to hoard them – is always deliciously difficult.

Yet however much they bring to the game, it needs to be set against the additional burden of rules and token-fiddling required to implement them. The simplicity of X-Wing was one of its joys, and it already required quite a lot of cardboard juggling, so these aren’t welcome changes. I won’t be using these ships every game.

Doubly so because the rules make it very clear that they’re not for every-game use. You’re supposed to either stick with the included scenarios that come with the ships, or use them in “epic play” format. Both require larger than the normal three-foot square play area, needing either four by three or six by three depending on the scenario.

The scenarios in each box can be played individually, or linked together to make a campaign. While some of the scenarios felt a bit long, mostly these are fun, well designed and don’t suffer too much from the rich-get-richer problem that plagues a lot of campaign rules tacked on to what were originally stand-alone games. Both are very good, but I thought the Tantive campaign was the better of the two simply because the rules are less convulted. Also, as I said before, the Tantive is just a more entertaining ship to run. 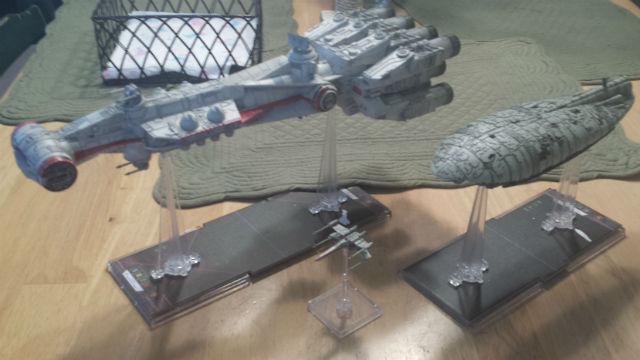 The reason is very simple: the Tantive is a proper combat ship, while the Rebel Transport is purely a support vessel. It has limited offensive capapbilities from one upgrade, the Slicer Tool, which allows it to do 1 damage to nearby ships with stress tokens, and the transport can burn energy to inflict stress on enemy vessels. It can also wipe out small ships simply by crashing into them, a surprisingly common occurance on a tight board with players used to the forgiving nature of the standard overlap rules.

Part of me would love to pretend that the fascinating tactical opportunities offered by the Rebel Transport were the best thing about the huge ships. And they are pretty neat: with the right upgrades you can use the Transport as a fire sponge, repair damage, even remove stress and target lock tokens from friendly ships. But I’m too shallow for that. overwhelming firepower was what I always felt was missing from the X-Wing game, and overwhelming firepower is what the Tantive gives you.

There’s no better showcase for this than the first scenario in the Tantive line-up which pits the single behemoth against a swarm of six TIE fighters. I didn’t have six TIE fighters and subbed other TIE models instead, and it was still amazing. This is what X-Wing was made for, nimble fighters zipping back and forth across a sluggish colossus as it tries to smash them with turret-mounted turbolasers and quad cannons and all the other cool stuff that comes in the box.

I don’t dount that FFG know this perfectly well, and put a premium price tag on the Tantive as a result. But both ships are fantastic additions to the X-Wing lineup, even only to see them drifting serenely across the starry void amongst your tiny fighters. If you’re a regular X-Wing player, you need one of these, and if the Transport makes more monetary sense, you can be sure of being very happy with your purchase.