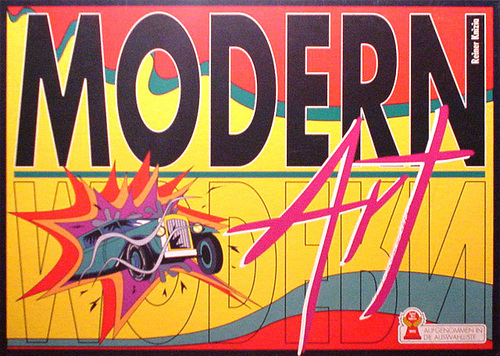 Inevitably, the player new to Reiner Knizia’s 1992 masterpiece Modern Art will look at the card on the auction block depicting an intentionally ugly painting and ask “how much should I bid?” I love this moment because it is an opportunity for the theme in one of the most strongly themed games ever designed to come through. This is a game- almost a satire, in fact- about speculative markets, phony hype and artificially inflating the value of worthless things. True, there are a couple of data points on which to hang an estimated possible return on investment, but ultimately the genius of Modern Art is that the players, representing gallery owners, determine what initially valueless bad art is actually worth.

Modern Art is quite possibly the greatest auction game ever designed not only because it connects the actions of the players to a very specific kind of subject matter, creating a narrative around the rising and falling values of works by fictional artists Liquid Metal and Christin P., but also because of its sharp focus on thematic auctions to drive gameplay. There isn’t much to the game- a deck of cards, some money chips and a board to show the value of each painting. And there isn’t actually much that you do in the game other than select a card from your hand and put it up for auction to other players.

Your hand of cards will be an assortment of paintings from the various artists, each with a symbol depicting a type of auction. When it’s your turn, you play one and conduct that particular kind of auction. There is a closed fist, blind bid auction. There’s a once-around-the-table one where you get the last bid. A fixed price auction lets you set the “buy it now” price and it’s sold to the player in turn order that’s first to accept. If nobody goes for it, you have to buy it yourself. And then there’s a free-for-all auction where everyone bids with no turn order and the seller decides when to drop the hammer on it. There’s also a doubling card for each artist that lets you put two up for sale at once.

Proceeds from one of your auctions go into your pile of money unless you win your own auction. That money goes to the bank. So any income you have comes primarily from selling paintings. The round ends when the fifth card of an artist is played (without being auctioned). The most popular artist- the artist that sold the most paintings, not necessarily at the highest values,- has a $30 chip put on his or her space on the market board. Second and third place artists get $20 and $20 respectively. These values are cumulative over the course of the game’s four rounds. Everybody sells the paintings they’ve purchased at the end of each round at the current market value.

What happens during these four rounds is highly variable. Karl Gitter might blow up in the first two seasons but completely flop in the last two. Yoko might remain a steady seller, And the works of Krypto might remain worthless junk throughout the game. It’s all depending on what the players do, what sells and what doesn’t. And since players get to control when the rounds end, there can be some surprise finishes when somebody won’t- or can’t- play the last Liquid Metal and it gives Christin P. time enough to catch up in sales.

Interaction is extremely high because you’re selling these junk paintings directly to other players. You’ll try to convince others of a painting’s worth based on what’s been played and what you’re secretly looking at in your hand. Everybody is going to laugh when you drop that worthless Krypto in the last round and it sells for $1- but then the guy that manages to get the fifth of his paintings on to the table has the last laugh when Kryptos are selling for $30 apiece. Everybody is going to want a painting worth $90 going into the fourth round, so you could theoretically value it at a potential $120, the top price possible. But how much do you bid- or set the price for- without shaving off too much profit? And what if you’re bullshitting and you know there’s no chance that Yoko is going to finish in the top three for the final season?

Modern Art is alive with direct competition and eye-to-eye engagement with other players. This is not at all some kind of dry, analytical mathematical exercise even though that can be its first impression. The fact is, Modern Art is more thematic than any number of games that try to convince players of atmosphere and setting with flavor text and illustrations. What you actually do, as a player in this game, maps to the subject matter in a highly conceptual way. The game is about art dealing, and that is exactly what you do in it. But more than that, it functions as a commentary on speculative markets where popularity, hype and hucksterism are more effective price drivers than actual quality or lasting value. The game has both subject matter and meaning, far more than most games regarded as “thematic” by the majority of today’s hobbyists.

But I’ll be the first to admit that I didn’t catch the theme back in the mid-1990s when I first played Modern Art. I thought it was just some kind of math thing. I also didn’t see the gameplay value in one auction after another. It didn’t help the game’s stature that auctions became such a tired, overused mechanic among Eurogame designs so it made sense that the heavily hybridized Ameritrash movement would shun the game for so many years. But coming back to the game in 2014 with fresh eyes and a completely different approach to analyzing theme and subject matter, I’ve been quite ashamed at myself for being one of those folks that dismissed this game for so many years. This game was never anything less than astonishing- I just didn’t appreciate it until recently. In an era where hobby gaming is drowning in bullshit of various descriptions, it’s refreshing to play a game so direct and pure that is also so motivated by its subject and design goals.

And now, it’s out of print. I wouldn’t expect it to be reprinted anytime soon because it doesn’t feature steampunk zombie miniatures, wouldn’t support a monthly expansion model and it isn’t a labor-intensive production game. Pure auctions are in style anymore and even die-hard Eurogamers are likely to incorrectly decry this game as obsolete or old fashioned. Ironically, you’re going to have to pay speculator-driven aftermarket prices to bring a copy of this essential title home. It’s a damn shame that there isn’t an annualized publication of this game with the year’s Turner Prize nominees in place of the fictional artists.