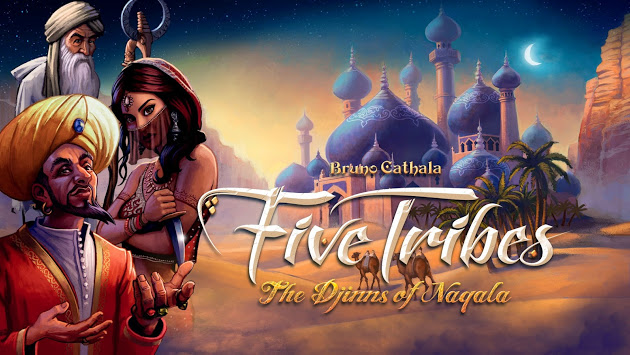 Bruno Cathala’s Five Tribes: The Djinns of Naqala is the newest issue from Days of Wonder and it is looking like a smash hit. But I wouldn’t call it a return to form for the French publisher, that has long specialized in great-looking, accessible family games. Don’t get me wrong, Five Tribes is definitely a great-looking, accessible family game but it also stands apart from the rest of the company’s catalog as something potentially more complex and intricate, straddling the line between the anybody-can-play simplicity of 1990s-style “German game” fare and more recent hobbyist designs that favor multilayered mechanics and density. I’ve been completely fascinated by how well this game accommodates two very distinctive styles of play without shortchanging either the casual or hardcore player or requiring any kind of rules modification.

The game may not tell much of a story, but the chunky wooden palaces, palm trees and camels along with a lovely color palette, fantastic illustrations of all of the Djinns and the thematic notion of the titular Five Tribes combine to create an evocative, Arabian Nights-style atmosphere. Village tiles are laid out in a 5×6 grid and each is populated with three meeples from those specialist tribes. On your turn, you pick up all of the meeples on a tile and move them- Mancala style- from tile to tile, dropping one on each that you visit. The hard and fast rule is that the last meeple you place must be on a destination tile that has one of the same tribe (color). When you finish your move, you take all of the meeples of that final color into your hand. If you clear the tile, you get to place a camel on it to claim its point value.

Then you take the action of that tribe. Yellows are elders- you keep those for a majority scoring at the end of the game. White are viziers, you’ll need them to buy and use the powerful Djinn cards that impart various bonuses and advantages as well as points. The green tribesmen are traders, and for every one of them you pick up from a destination tile, you get to take a trade good from a market row. Income is managed by blue builders, who give you money based on the number of builders multiplied by the number of blue-numbered tiles around the destination. Tribe red are the assassins, who let you kill an Elder or Priest held by another player or you can kill a meeple on a tile- which may clear it and allow you to claim it with a camel.

On top of the tribe movement and actions, which are an obvious ongoing concern for the player, there are also actions on each of the village tiles. Some let you buy goods from the market row. Others let you spend viziers to buy Djinns. There are tiles that improve by building palm trees or palaces on them. So on a given turn, you might be looking at a number of possibilities and combinations of actions between the tribes and villages. Turn order can be tremendously important, and each turn is prefaced by a pay-up-front auction to see who gets to go before everybody else messes up the board. Even pulling up the rear, it seems like you’re never far from a clever, high-scoring play- if you can sort it out from the game state when your turn comes around.

But Five Tribes is hardly a solitary, processional and mathematical exercise. Not only is the board in a constant state of player-generated flux, the Djinn cards really mix things up quite a lot to the point where some of them might be considered imbalanced by some players (read: the players not using the ones regarded as problematic). They all have proper names and great illustrations, along with thematic powers that give impart a nice mythic flavor to the game. The assassin tribe also creates a subtle but potentially impactful way for players to directly affect holdings within clear restrictions. Taking an assassin action to knock out someone’s priest before they’re about to activate a powerful Djinn is always fun, as is assassinating a yellow Elder to claim the majority of them right before the end of the game.

By the time that end rolls around- let’s call it around 60-75 minutes, more if you’re playing with slowpokes or MENSA members- points are tallied up including money, village holdings, Djinn cards, sets of market goods (more variety equals more points), tile improvements, and the number of white and yellow tribespeople you’re left holding. Naturally, it’s pretty much impossible to excel across all of these scoring vectors so determining the right pathways is both a tactical and long-term core competency.

Making an audience feel smart is a powerful attractant, and Five Tribes excels at providing players immediate satisfaction. Players score something every turn, and while it is true that this is the kind of game where there are lots of points up for grabs at all times from many sources, it is also true that spotting those smart moves and leveraging the advantages of the Djinn cards and turn order will provide better results. There’s a lot to take in at first, but after a couple of games it becomes much easier to see certain patterns and pathways that will yield higher scores. This is where some of the “min-maxing” can come into play, and this is where the ugly specter of analysis paralysis can cause the game to drag. I would argue that Mr. Cathala has actively attempted to thwart the AP-prone by including plenty of baffles such as variable elements (which change not only every game but from turn to turn), hidden scoring and a fundamental reliance on player activity to alter the game state constantly throughout play. In short- don’t overthink it.

READ ALSO:  Why I Think Borderlands 2 Sucks (But I Like It Anyway!)

At least that’s how I play- I look for those smart, fun plays and rake in the points. I groan when I see somebody grab an opportunity I missed, but I don’t care to hyper-analyze the game. It’s usually pretty clear in most cases where the better payout is. You should use the Djinn Utug to claim the 15 point village and not the four point one. Anybody can see that. But where it gets a little hairier is choosing how much money to spend on going first in a turn, since then you’re weighing out a net gain for getting to an action or actions first versus the cost of claiming first player rights. Then there are the combinations of tribal actions paired with village actions, and the consideration of what potential moves you are setting up for subsequent players. Valuation becomes very tricky the more you squint at it, and this is where Five Tribes actually allows players who want this kind of challenge to dig in for it.

I love this game, particularly how you can play it completely as a lightweight game with fun mechanics that create lots of satisfying “aha!” moments or as a heads-down strategy game where you are always evaluating multiple scoring options across a highly volatile board. It’s a game that is definitely on trend, matching up with recent efforts that have prioritized accessibility and simplicity over the complexity and bulk that had been favored among the Eurogame set over the past several years yet it retains the appeal of the more complicated titles in that genre. This is exactly the right kind of game Days of Wonder should have released here in 2014, and between this title and Mr. Cathala’s other big recent release, Abyss, I think we’ll be hearing his name quite a lot in the Spiel des Jahres discussion next year.

One thought to “Cracked LCD: Five Tribes in Review”