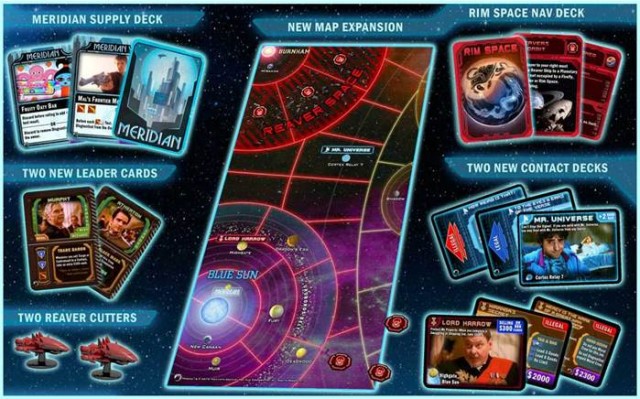 Alright, so by now I’m sounding like a broken record regarding Gale Force 9. So far, this company is batting a thousand and bowling a 300 game. They have yet to release a less-than-great board game product. They’re all good, but it seems that Firefly is likely to remain their premiere release for some time to come. And for good reason. Whether you’re a Browncoat or not, Firefly is a great game with tremendous appeal for fans of the license and great gameplay for everybody. There have already been two expansions for Firefly, the small “Breakin’ Atmo” add-on that beefed up the available jobs and the PVP-focused Pirates and Bounty Hunters. Now, they’re giving us more map to play with in the new Blue Sun expansion that adds a Rim Space region that bolts on to the left side of the existing board. Fans of the show will be excited to see Mr. Universe and Lord Harrow setting up shop in the ‘Verse. New gear, new jobs, a new supply planet, three new scenarios, two new captains and some new rules to explain it all add up to a stuffed-to-the-gills expansion that works seamlessly with or without the previous additions.

Oh, and there are more Reavers skulking about.

Above all of what Blue Sun has to offer a stronger sense of danger from the Reavers (and the Alliance) are is my favorite feature. There are now three Reaver Cutters, and they all start in Rim Space. When the Reavers move, they leave behind “alert” tokens, which means that players entering regions where there has been activity noticed by these space-faring psycho-cannibals take a die-roll based risk of encountering them- even if the actual Cutter figures are sectors away. Surprise!

As the game progresses and the Reavers roam around, this makes the board much riskier, and players may have to weigh out the decision to take a chance on the Reaver roll to complete a job or avoid running out of fuel. Players can also now mosey into Reaver spaces, and just like in the show there’s a “Reaver-flage” card that allows players to dress their ship up like a Cutter to avoid detection. With three ships to move and lasting on-board effects of their movement, the Reavers are much more of a threat than ever before. This is fun. There are also Alliance alert tokens that impact how the Alliance Cruiser operates in a similar fashion. New Nav deck cards accommodate the new Reaver rules and there is a separate deck for flying through Rim Space.

I’m also particularly fond of how Mr. Universe functions in the game. He doesn’t give jobs, he sets up riders for existing jobs so if you can meet the requirements, you get his knock-on bonuses. Plus, if you are solid with him, you can take on his “Big Damn Challenges” from anywhere on the map- thus enhancing any job you take on from any contact. Lord Harrow, the other new contact, offers some questionable shipping contracts and sells you cargo when you’re solid with him.

The scenarios are good (I particularly like The Great Recession, that drastically limits the number of available jobs in the game), but be warned that there is a continuation of the trend established in Pirates and Bounty Hunters that saw that expansion move away from solo-friendly play. With the additional Reavers, for example, there’s now a greater chance to directly impact other players and unless you jimmy up some triaging rules for their movement. You’re going to lose that opportunity to use the cutters as an offensive weapon when playing alone, and Lord Harrow’s cargo-heavy jobs are just cryin’ out for some piratical misbehavior.

It’s kind of a shame that the new features aren’t really compatible with solo play. I really enjoy solo Firefly and I’m sure others do as well, but it’s understandable that direct conflict simple requires live people to get the most out of it. The upshot of it all is that Firefly has, over the course of the past two expansions, become an even better multiplayer game than it was in it is initial release. Previously, I would have said that Firefly was one of those games that’s “best with three” because there wasn’t a whole lot of interaction or direct conflict. Now, with Blue Sun and Pirates and Bounty Hunters bolted on to the hull, I’m finding that four and five player games are much more interesting- albeit longer.

I’m also starting to get a bit leary about further expansion. With a small card add-on and two big expansions, Firefly is already starting to feel rather sprawl-y. One of the things I really liked about the game from the beginning was that it was really quite clean- decks of jobs, decks of stuff, player boards and just a couple of miniatures on the map. Now, there’s more of everything, more tokens, more “stuff” going on. We’re not at Arkham Horror levels of bloat, but right now I’m feeling like the game is at a comfortable level of mostly optional complexity. I like playing with everything, but I can see where some folks may want to avoid adding anything on to the game.

Regardless, we’ll likely see more Firefly in the years to come, the game has already had a longer run than the show did. Despite my reservations about it approaching bloat, I can’t say that I won’t want to check out what’s next because I love this game. But what I would really like to see is GF9 leveraging the success of the Firefly line- as well as its other licensed titles- to bring us a completely proprietary creation. They’ve conquered the licensed game market in just a couple of short years, now all they need to enter an “Imperial” phase is to show us something that is 100% GF9.