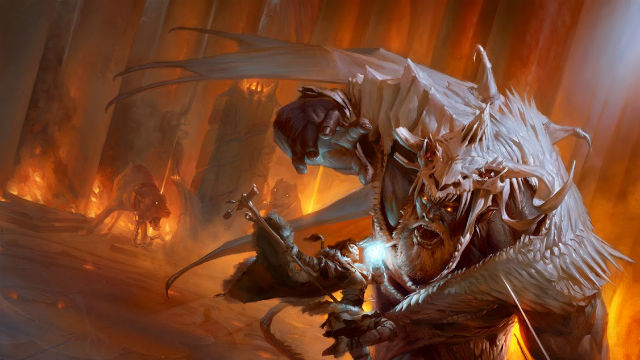 It’s rare that the first thing to strike you about a book is a noise. But here, it was. After being so excited by the Starter Set, I couldn’t wait to get into this. So I ignored the cover and opened the book to a loud crack as the spine flexed for the first time. It was like the sound of the lock falling away from my teenage memories.

Back then, no-one ever read the Player’s Handbook from cover to cover, and I doubt anyone does now. It’s skimmed, flipped, relished. So first impressions count.

They’re good. The pages are thin but printed with a nice fake-age background. Tables are pleasingly infrequent. The art is plentiful, good quality and diverse in its representation of race, class and gender. Male Half-orc paladins stand shoulder to shoulder with scholarly female wizards. Most are sensibly clothed.

This is the first D&D supplement I can remember that encourages players to use the game to explore diversity.
“Don’t be confined to binary notions of sex and gender,” it says. It’s nice to know that D&D has moved into the modern age while preserving the things that made it special in the past.

Alongside those sentiments there are other short, but useful, chapters on role-playing and personification. Mostly, what we want are rules and mostly, that’s what we get.

You have to remember that I haven’t played the game since 2nd edition. So things that stand out to me as big changes might not seem so huge to more dedicated players.

One thing that impresses is the way in which the game has become less about specialists, more about letting players create the characters they want. There are twelve classes now, each with several archetypes.

At the extremes, this plethora of options blend in to one another. With an Eldritch Knight in the party, you might not need a Wizard. Sometimes the overlap seems too extensive. I can’t quite see why the Barbarian and Sorcerer classes weren’t just folded as archetypes for the Ranger and Wizard respectively.

But on the whole, it works. Specialists are still best at what they do, but players can build characters as they like.

This change of focus is supported by the core mechanics. Everything works on a d20 check now, against a difficulty number. You add ability score modifiers, but also get a proficiency bonus, dependant on level, for things your class is good at.

Fighters get it on all weapons, for instance. But you can now get proficiencies in skills and tools, too. So anyone can use Thief’s tools to attempt to pick a lock. But a Rogue will get their proficiency bonus when they try – double, in fact, thanks to a special feature of the class.

It’s a great way of doing things. It’s more realistic – why, in old systems, couldn’t other classes search for traps if there wasn’t a thief in the party? The broad skill categories make it more comprehensive, so there’s few situations in which you can’t bend the rules to fit. 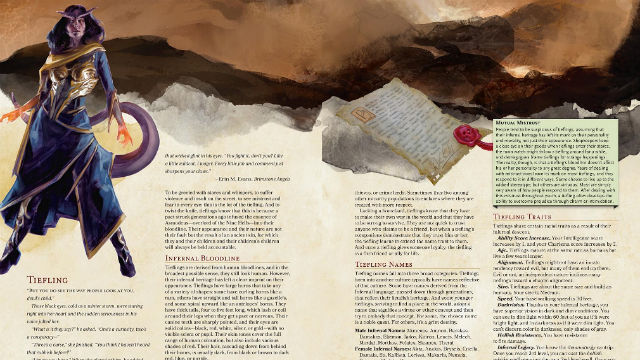 It’s also the mechanic behind the rebalancing of the game. A key feature of this edition is that powerful characters are no longer god-like. A lone fighter will eventually succumb to an army of goblins. It works because proficiency bonuses increase slowly, and max out at +6. So a 20th level figher, with a few stat increases, is only going to get perhaps +6 on the dice more than a 1st level one.

But best of all, people can play the characters of their imagination. Common fantasy stereotypes that were near-impossible in the old system are easy now. Swashbuckling warriors are just as good as armoured tanks. It’s straightforward to combine spell and sword if that’s what you want to do.

To add flesh and flexibility to the character creation process there’s a mandatory background step. This gives you a couple more skills and some starting equipment, as well as a foundation for your character’s back story.

While a welcome addition, it’s perhaps the weakest thing in the book. In contrast to the wide-ranging races and classes on offer, there’s only a limited selection. And they’re painted in narrow strokes where they ought to be board. You can chose to be a Noble, for instance, or a Sailor . But not a Noble Sailor. And there seems an astonishing diversity of semi-criminal backgrounds, from Charlatans to Urchins to actual Criminals.

At the end of the book come spells. These are no longer divided into spells for different classes. Instead, each class has a list of spells they’re able to potentially learn and cast. This makes referencing what spells belong to what class a bit of a nightmare. But it’s nice to see the end of silly duplications of identical effects across different classes.

Casting, like almost everything else in the new edition, has become more flexible. Spellcasters can prepare a wide selection of spells during a long rest. When they cast one, they use a slot rather than losing the spell. There’s also a new idea of casting low level spells with high level slots, for a more powerful effect. These are all excellent changes. No more will wizards find themselves stuck in situations without a useful memorised spell.

The other striking thing about the spell lists is the substantial number of non-combat spells. In previous editions, this felt like lip-service to encouraging nonviolent solutions. Here, it chimes authentically with the greater focus on skills and tools rather than just weapons and armour.

So now you know what’s in the book, it’s time to end on a question. Given that you can download character creations rules for free, why buy the book?

Well, aside from the pleasure of the art and the convenience of a hard copy, it comes back to the overarching theme of what I love about this edition: flexibility. Those free rules have only four classes, with one archetype each, and a cut-down selection of spells. Reading this Player’s Handbook felt like unlocking my imagination to polymorph into whatever fantastic character it desired. That’s in stark contrast to the rules, restrictions and specialisms that characterised earlier editions. The free rules feel a bit like those earlier editions. If you really want to let your mind run free, this is the book for you.