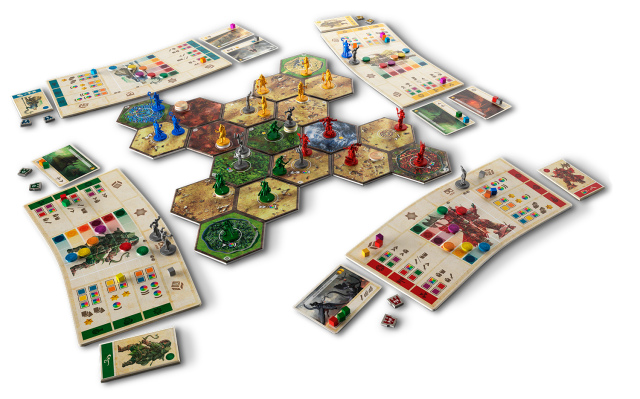 The first time I played Hyperborea, the new big box release from Asmodee designed by Andrea Chiarvesio and Pierluca Zizzi, I thought about a couple of other games. Those games were Eclipse, Runewars, Cyclades, Kemet and Nexus Ops. Over the course of the 90 minutes or so that it took to play, I went from furrowing my brow at it, wondering if the rulebook was making the game seem much more complicated than it actually was, to absolutely loving it. By the end, my knee-jerk one-game opinion was that it was better than the first game I had in mind, tighter than the second, as good as the Matagot titles, but obviously not a time-honored classic like the last. After a few more games logged with it, I think it’s one of 2014’s best releases and I’m still anxious to get this streamlined, cunningly designed fantasy 4x game to the table again.

There’s another game that Hyperborea will remind you of, but I’m almost reluctant to mention it because of the expectations (or baggage) that comes with it. You see, the core activation mechanic in the game involves drawing colored cubes out of a personal bag and placing them on your race’s console display in various combinations to activate core technologies. Throughout the course of the game, you gain more cubes by moving a marker up six different meters representing vectors of civilization development like wealth, warfare, and science. Or you might find these “civilization cubes” by searching ruins- after you beat the ghosts guarding these lost secrets. When you use your cubes to activate research abilities, you get to pick from a display of new technology cards which improve on existing functions and provide new powers. Each one you take also throws a “waste” cube into your bag that can not be used to activate anything except for a few techs that weed them out of your pool.

In case you didn’t sort it out, the game I don’t want to mention is Dominion. I really don’t want to cast Hyperborea as a deckbuilding game. The designers call it a “bag building” game, which just puts me in mind of Quarriors or Dicemasters. This is really selling it short because the designers of Hyperborea have taken some of the key ideas of Dominion and other deckbuilding games- the resource generation, the cycling, the chaining of effects- and have made what I think is one of the more evolved and best integrated example of putting those concepts into a board game design.

The setup is familiar. Two to six players (yes, it supports six- a rarity these days) take on one of the game’s fantasy races color-coded to match up with one of the development categories. All are represented by miniatures, since this is essentially a Dudes on a Map (DoaM) game. There is a very recommended option to allow each player to choose one of two special race powers to give each side a touch of flavor. The red guys are geared toward combat. The yellow guys are merchants, so they are keyed to wealth. Green is traditionally the color of rangers and elves, so their impetus is mobility.

Each side gets a three-hex tile that represents their homelands and these are placed around a ring of “borderland” hexes surrounding a central, capital city. All but the homeland tiles are face down, so there is an early game exploration period that ends briefly. There are simple swamp, mountain and forest terrain effects that impact movement. Some hexes have cities, which can be occupied to generate an effect or resource as long as you have a man in there, while others have ruins. These spaces let you send units in to fight a ghost unit (worth points at the end of the game) and uncover beneficial relics. Quarters are close, and the game wastes no time in throwing you into battle. Turtling is not a viable option.

On your turn, draw three cubes. You put those cubes in boxes of the appropriate color on your race console or on the technology cards you have acquired, and if you fill the corresponding boxes you generate resources or actions based on the depicted icons. There are icons for movement, combat, gaining victory points, drawing extra cubes, ranged attacks, moving markers along the development tracks to gain cubes, and other effects. You can place cubes in anticipation of completing sets on your next turn or you may wait to see what happens when you search a ruin.

Everything is tightly systematized. All functions- technologies, relics and cities- generate the same icons. So like the money and actions in Dominion, an effective turn is one that leverages multiple sources to produce combinations. Where this game gets really interesting is when you realize how open-ended your turn is. Options are plentiful- if you play smart and don’t blow strategic opportunities. It may be a good idea to pile all three cubes into a tech to get some extra units on the board, or it may be wiser to bank one in three different techs, hoping for a draw next turn to let you activate two or even all of them. Moving units to claim territory is important, but so is committing them to activate city actions and explore ruins.

But here’s the catch. Like in any deckbuilding game, eventually you’ve got to reshuffle. In Hyperborea, this means that when your bag is empty, you take everything off of your technologies as well as any new cubes you’ve earned and toss them back in the bag. And those guys you sent to do city actions and dig up relics? They’re completely locked down until that reshuffle. So you might wind up wishing you had waited instead of committing everybody on the board. Or you might have done so at the right time to gain a significant advantage.

Combat is very much like it is in most deckbuilding games where you generate attack points. Units of various factions can co-exist in each hex, although it has to be solely held to use the cities or ruins therein. If you generate attack points, each one you make kills one enemy unit or ghost. There is no defence, unless the victim of your aggression used a technology in the previous turn to place fortress tokens. Each of these absorb one hit, but they are also removed from the board at the beginning of the owner’s turn. It gets pretty bloody even though unit density on the board is quite low, and there’s a smart system that encourages players to attack each other player at least once to maximize points.

READ ALSO:  Brakketology is Keeping it in the Family

This is a victory point game, and you’ll get them by using cubes or card effects to generate them, fighting, acquiring technologies and accomplishing three achievements- have all of your figures on the board, have five techs or have a number of VP gems on your card. When two of these are claimed, the game ends and you total it all up on a scorepad.

I think there’s going to be a lot of grousing from the dogmatic Ameritrash crowd that this game is “dry” or “restrained” because there’s very little fine detail and it is very mechanical. There’s no dice rolling, which is somehow regarded as more “thematic” than generating sword icons. But who cares what they think, this is a brilliantly constructed modern Eurogame hybrid that is just an absolute blast to play.

The engine is fun. I especially like how getting the development cubes works. Filling up those meters hits those same psychological triggers that watching an XP meter rise in Diablo III or whatever does, and I love that you can cash it in early for one cube or wait just a little longer to complete the track and take two. The open-ended turns offer a lot of variety, and the wide range of technologies offer players the ability to strategically evolve their race to suit the game state. You’re never railroaded into a certain tech tree or path and there’s always a sense that you are pushing toward something, be it a tactical play on the next turn or working toward one of the achievements.

The only knock against this outstanding game is that it is very expensive. At $100 retail, it’s undoubtedly going to put off a lot of potential players. But in its defense say that it is a great-looking game with some very nice production quality and clean visual design. And the box is pretty packed with high quality components including lots of plastic. In a day and age when people are paying three, four and five times this game’s street price for sloppy crowdfunded junk, I have to admit that it’s almost refreshing to play a $100 game that feels like it may actually be worth the price.