The design itself doesn’t help. It feels like designer Bruno Cathala poured a random assortment of mechanics into a pestle, ground it up, and put the fragments into a box. There’s still identifiable chunks of games like Mancala, Carcassonne and even Cyclades in there. But there’s also a lot of dust that feels familiar, yet annoyingly elusive.

It’s a pretty tasty mix, though.

Players make a grid of randomly assorted tiles, then drop three randomly coloured meeples on each one. On a turn you grab all the meeples from one tile and drop them, one by one, on a series of linked tiles, Mancala style. The last tile has to have a meeple matching the one left in your hand, and you collect all the meeples of that colour from the tile and remove them from the game.

It sounds confusing, and it is: I’ve had terrible trouble explaining the rules. The trouble is exacerbated by an awful rulebook that’s spawned Q&A threads all over the web. Yet it’s not a difficult game to grasp. Everyone will have it mastered by the end of a single game.

The genius of the game is that the chimeric mechanics interlock to deliver an experience that works on multiple levels. At first it looks like a matter of identifying likely tiles to control and grabbing them before anyone else by outbidding them in the turn-order auction. Failing that, you just maximise your points through meeple and tile actions.

As you play, however, layers upon layers reveal themselves, until it starts to feel like it’s varicoloured meeples all the way down. You start to plan moves that won’t leave your opponents with easy control targets. Then you begin to grab useful looking cards before them, trying to work out the cost benefit ratio of who might own what. Before you know it, you’re caught up in an agonising web of what might happen with every single meeple you drop from your sweaty fist onto the board.

And at that point, you’re in trouble. 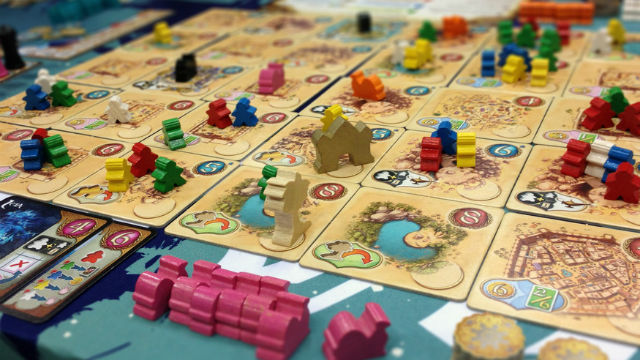 A lot’s been made of the potential Five Tribes has for crossing over the boundary and appealing to casual and hardcore gamers alike. All those layers are the reason why. But I don’t buy into this analysis at all, for two reasons.

First, with all those hidden depths, hardcore gamers can’t play with casual players at all. If someone’s going to sit and pick over the strategic bones of every turn, they’ll wipe their opponents off the tile-based board with ease. That’s not going to be fun for anyone else, and that’s no worthwhile family game at all.

Second, working through all the options takes an age. Five Tribes is, from certain angles, a honey trap for analysis paralysis players, sucking them in with a sweetly accessible surface, then ensaring them in the strategic pits beneath.

There’s nothing wrong with a well-designed heavy game, of course. It’s just that when played like this, Five Tribes becomes boring. The game state changes massively each turn, so you can’t plan in advance. That exacerbates the issue, of course, because it makes individual turns longer. You’ll want to grab the AP gamers at the table and suffocate them with the black cloth bag that the game provides to keep meeples in.

Also, everything about the game screams to me that it wasn’t every supposed to be played that way. There’s some neat player interaction mechanics to keep things a bit loose and trashy. The best examples are the genies, cards you can buy on certain tile actions that give you a victory point bonus and a special power. Some of these are really neat, like taking control of empty tiles, or taking away some of your opponent’s collected meeples. It feels like it ought to be a light, fun family game with enough moving parts to appeal to hobbyists. Of which it is, in fact, a magnificent example, as long as you can keep things moving.

That sense is deepend by the presentation of the game. Wooden meeples are passe nowadays, but most of the other stuff is great. Chunky palm trees, golden palaces and vibrant artwork on the genie and resource cards. The player colours are soft pastels, including pink. So there are pastel pink camels in the game, which I presume is a tribute to through the desert.

Five Tribes is great family game with hidden depths which, in turn, sucks hobby gamers into an inviting pit of paralysis which can ruin the game. I can’t make head nor tail of that conundrum, and that’s what makes me a bad reviewer. I had a blast playing the game with family and friends. We enjoyed the fine blend of mechanics, the little bit of interaction and teetering dangerously on the edge of the abyssal depths. So I guess the final judgement is, if you’re going to play Five Tribes, choose your friends – and your genies – wisely.

One thought to “Five Tribes Review”