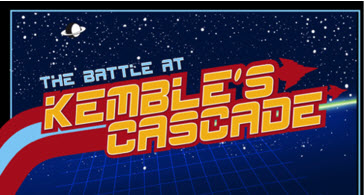 The Battle at Kemble’s Cascade- despite its unwieldy title-stuns at the box level. Z-Man games pulled out all of the stops, graphically. Featuring an illustration straight off of an arcade cabinet circa 1987 with fine detail such as simulated wear, stripes and a just-right font choice, the epic “shoot the core” battle scene twixt spaceship and giant boss tells you right up front that this game is inspired by and pays tribute to classic scrolling shooters like Gradius, R-Type and Raiden If that elevator pitch is enough to get you into the cockpit, ready to dodge a million bullets, then you might be in for a surprise.

Kemble’s Cascade isn’t nearly the twitchy, pew-pew “shmup” you might rightly be expecting given the concept and the absolutely smashing visual presentation aimed straight at the heart of anyone who’s ever played and loved any of these kinds of games- myself included. It’s slower, more puzzle-y and rules laden than I thought it would be. The process is simple enough. On your go, you move one, shoot one and then pay energy to move or shoot more. But you’ve got to move at least as many times as you have Threat built up from your last turn, incurred by getting shot at by enemy ships or other players. If you can’t you lose energy from the hits. Run out of energy and you blow up. The threat/movement equation is one of this game’s more brilliant ideas as it abstracts that whole dodging thing without having you literally move all over the “screen”.

The “screen” is made of rows of cards, each with two spaces on them, laid out in these ultra-chintzy card trays. Some spaces have bad guy ships, some have asteroids, some have other obstacles. When an enemy ship is destroyed, you cover it up with a space card. When the round is over, the bottom row of cards is cleared, the tray goes to the top and is refilled with more cards, which are staged to represent different areas of the game. Player ships still on the bottom? Scroll pushed into whatever asteroid or enemy ship is in front of them. Kaboom!

Anyone who has ever played the classic kid’s game Up the River (most recently released as Race Through Space) will immediately recognize the scrolling mechanic. It’s neat, visual and it keeps the game on a forever forward trajectory- at least until the way to the massive screen-wide boss at the end of each game. It takes anywhere from 75-90 minutes and some change to play through a game, during which time you could possibly complete every level in a Cave shooter on your iPhone five or six times. This game shouldn’t feel draggy, but it sometimes does.

The issue is that there is actually a lot of game here, so much so that I feel like Kemble’s Cascade is overdesigned and somewhat overwrought. There is no randomness, no reflex actions or sense of speed. Instead, there are terribly gamey elements that sometimes speak to the shooter concept, sometimes not so much. There’s a lot going on beyond the appealingly raw move/shoot/dodge/power up/explode conceit of these kinds of games.

There are power-up cards that give your ship a special ability. Then there is a shop action, where you can effectively shop in-flight (huh?) for a range of engine, shield and weapon upgrades that, sadly, do not include some kind of spread shot. Each of those can upgrade as well. You spend money earned from shooting enemies and sometimes just for certain cards showing up on the screen. I find myself thinking the power-up spaces would have been enough without the need for currency and a market.

Then there is the somewhat weird conceit that every ship starts with a rotary cage, a device that lets you spend an energy to shoot in any direction. It’s a cool idea and not without precedent in arcade shooters, but it feels like a bandage applied to a unique issue created by moving a scrolling shooter to a tabletop environment- the enemies do not move, so lining up shots without the rotary cage can be really difficult. You can choose to play the game without it, but then it feels like you really need to have it because the enemies do not actually move- they just scroll down. So you can’t strafe a formation or anything like that. And since PVP is a concern (like it was in no shooter, ever), you also have other players shooting at you and they don’t tend to want to politely stop with your guns up their afterburners. So the game really kind of needs that four-way shooting to work right.

But by far my least favorite aspect of this design are the goals- top to bottom. I do not like the Achievement cards at all. Sure, it’s a modern video gaming concept, but why am I being rewarded for doing ridiculous, anti-success things like crashing X number of times or getting scroll pushed Y number of times? There’s an array of public Achievements that anyone can strive for to earn victory points, and on top of those every player also has a secret mission card. That may give you points for buying things or ending your turn in the top row of cards so many times.

The end goal of beating the boss just gives you VPs for destroying sections of it, but the endgame is really quite dreadful. Rows of cards start dropping off, and the player ships just kind of get pushed up into the boss. Then you count VPs. It feels like there isn’t really so much of an ending as there is a slow-motion crash into a brick wall. It doesn’t feel like a desperate, all-or-nothing battle against an impossible foe. It’s anticlimcatic to say the least.

Here’s the problem at the root of all of the above. I don’t think that the designers of Kemble’s Cascade really have the conviction to make this whole “arcade shooter board game” thing work. It probably should have been that pew-pew spaceship game that you expect from the artwork and box copy, but instead there’s all of this clutter that tries to make it a somehow more legitimate “game”. Why shouldn’t the goal of the game to be just simply SURVIVE the gauntlet and blow up the boss? Why am I counting victory points in a game that is simulating another kind of game where second-to-second survival is the goal? Sure, these kinds of games are all about scoring. But those high scores come from exploiting bonus mechanics and keeping alive long enough to maximize them.

But no, Kemble’s Cascade has you spending all of your energy to get two points for ending your turn with only one energy for four turns. You’re fussing about whether or not to spend an extra energy to move or shoot one more space or to take that rest action (whuzzah!?) to recharge and browse the store. I appreciate that the design is solid, completely works and is actually a pretty good game despite my misgivings and thwarted expectations, but these guys had a tremendous idea and it feels bogged down in appeals to the modern hobby gamer mindset.

There are so many great ideas in this game- the threat mechanic is brilliant. Even though the PVP element is totally out of place, I love that when you shoot somebody you put markers of your color on their card that effectively cash out in VPs for you if they get destroyed. The scrolling mechanic works really well, and I like how the game is staged by the cards. I love the attention to detail- the little plastic ships look just right and I love that one pilot is a Falco-like bird man and another’s name pays tribute to Captain Harlock. And the atmosphere can’t be beat- it does not at any point come across like any other kind of space game, it is very clearly intended to be this particular kind of space game.

But this particular kind of space game on the tabletop is sort of awkward in the final equation. Kemble’s Cascade is a game attempting to simulate another kind of game that isn’t really compatible at all with the qualities of tabletop design. That it works at all is kind of a small miracle, and even though I think this is a shaky, uncertain design that lacks confidence and tries too hard to be a modern hobby game I can’t help but admire the attempt and I remain completely fascinated with how the designers approached the problems of making a scrolling shooter work as a turn-based, multiplayer tabletop game. I love that this game exists in a swelling tide of mediocrity and repetition rippling through the games industry. There just should have been a more editorial eye toward streamlining the game and teasing out the kind of seat-of-the-pants, moment-to-moment action that you’d expect from the concept, and less attention paid on initiative cards, energy budgeting and other fussy boardgamer concerns.