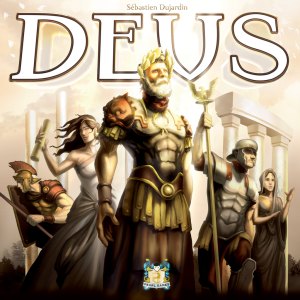 Let’s get the ugly part of this review out of the way up front. Deus, the new game from Troyes designer Sebastien DuJardin, is the least attractive game I have seen in quite some time- at least since the original edition of Glory to Rome insulted aesthetic sensibilities and assaulted good taste some years ago. The game, coming to the US courtesy Asmodee, is packaged in a box mostly the color of tapioca pudding with badly chosen fonts (dropshadows and lensflare, really?) and drab, muted artwork of stern figures from mythology, who really don’t have much to do with the game. Nothing about it says “fun”. Especially not the title, which isn’t very descriptive of the action at all.

Once you’ve gotten it open, you find these awful-looking blobby terrain tiles with irregular spaces. Which would be fine, but someone thought that putting red, blue and yellow terrain on them was a good idea. Beyond that clash of colors, there are inconsistencies in the color scheme throughout. Wood is produced by green tiles and is indicated by a green icon but the tokens for the resource are brown. Speaking of brown, you’ll find references to brown buildings throughout the rules and cards, but there aren’t any. They’re orange. Even the coins are mis-colored, coming in denominations of gold, silver and…green. The victory point chips look like wrestling belts with a crappy, plain black system font slapped on them. Other than the badly executed custom bits, this title is stocked with stock pieces- you’ve seen all of these bits before in other games. It almost looks like a prototype someone put together with generic bits, apart from the cards and tiles.

The good news, despite a failure in the visuals department, is that Deus is actually a very good game. 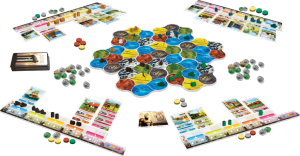 Deus is another entry in the already well-trod “civ lite” genre but it has a couple of maneuvers that set it apart from the pack. It is essentially a tableau-builder game not unlike Race to the Galaxy or Glory to Rome, but the cardplay has a cool progression and development angle and there is on-the-map play. You’ve got a five card hand to start with and nothing on the modular tiles, each divided up into seven territories inclusive of four resource-producing land types, barbarian villages, and water. On your turn you either play a card along with the required resource and gold payment and place a building into a territory or you “make an offering” to one of the barely-present gods, meaning that you discard a card of a color corresponding to a god and receive a benefit for each other card you discard.

Making buildings is the core action of the game and there are some cool quirks to contend with. There are five categories of developments, each color-coded and keyed to one of the gods. There’s blue trade, green production, yellow science, brown (well, orange) civics and red military. When you make a building, you play the card for it from your hand into its categorical column on a player display and put a building into a territory adjacent to one you own or into one of yours that does not already have a building of that type. So you can spread out or consolidate for larger cities.

Now here’s the interesting part. When you play that building card, you activate every other building card that you have played in that column from the first built to the most recent. This creates lots of opportunities to discover card synergies, combinations and other advantages not only from building selection but also the build order. Over the course of the game, a true sense of development and progress emerges.

The building effects are varied, ranging from producing resources to generating income to providing additional card draws or refreshing your supply of buildings. The military category is where the PVP comes into play, as military units can often steal VPs or money from players with adjacent territories. Put a card that lets an army move before one that lets you steal and you’ve got a mobile attack set up every time you build a new military unit. There are also neutral barbarian villages affected by military and VPs to be earned when one is completely surrounded- the player with the most buildings around it takes the prize.

There is also a temple category down on the end of your player display. These are the “bonus buildings” that provide an end-of-game VP boost for various categorical achievements. You have to have at least one building of each color to build your first temple, then two of each to build the second and so on. There’s a nice variety of temple effects speaking to a number of longview strategies. You might get points for having territories with many buildings or for having lots of territories with few buildings. There are bonuses for having the most of a resource at game’s end or for having the most temples. Each player count offers a set number of temples before the game ends and you count ‘em up.

But let’s say you don’t have anything in your hand that you don’t want to play, somebody nicked that green (?) coin you needed to make your build or you’re out of Science buildings and you’re trying to buy a school. The discard/refresh option is the offering, and each civilization category provides a different benefit for discards. Discard a blue card, and you get money for each other card you dump. Likewise, green does the same for resources. Tossing out a yellow gives you an extra card draw for each that you discard with it- sort of thematically representing scientific research, get it? All of these options turn into critical decisions over the course of the game, and the luck of the draw is quite effectively mitigated by a constant turnover of cards in hand.

I’ve found it very interesting how this design approaches the concepts of progression and development by simply creating these queues of card effects that trigger when you expand a category. The sense that your civilization is getting better or more efficient is palpable, and the addition of a geographic element uncommon to the tableau building genre gives a nice, abstracted sense of territorial competition and possession. The map also creates some compelling decision points centered on placement, resource scarcity and proximity to other players. I really like the choice between building into a territory you already control for potential benefit and expanding into adjacent territories.

This might come across as odd, but it’s almost refreshing to play a game like this that feels more like a late 1990s Settlers clone than a post-Puerto Rico (or more appropriately San Juan) Eurogamer. It isn’t hard to detect the influence of Settlers in the design and its unexpected rules simplicity makes it feel like a throwback to that era of German game design. Of course, this has been something of a trend in games lately, and I’m happy to see that Deus is in that general movement. It’s a simpler game than Race for the Galaxy or Glory to Rome, but I think fans of either would do well to investigate this title.

Deus plays briskly. With two players, it’s a very tightly wound, challenging game that takes 30-40 minutes. With three or four, there is obviously more friction on the board and more competition for resources (the supply for each player count is finite). I’ve found that I actually like the game best with two if only because the deeper strategies of building are easier to reach without interference or having to deal with a diluted card pool distributed between more players.

I have to admit that when I got Deus from Asmodee, I had a moment of “reviewer’s dread”. I felt like I had gotten something that I probably should have declined. But when I started playing it and getting into the development flow and simple yet deep cardplay, I found that I was enjoying Deus a lot more than I expected. I just wish that it looked better. With some nicer components and better illustrations, I think this game could have been a smash. But it looks ugly, esoteric and not very much fun at all. Here’s hoping for a visually upgraded second edition at some point down the road.