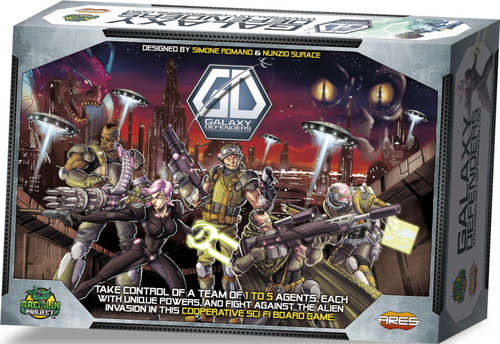 Imagine if you will a rock band. Let’s postulate that this rock band- who are pretty good but not particularly groundbreaking- got signed on to be the closing act for a festival where the penultimate acts scheduled before their set time were Elvis, the Beatles and the Rolling Stones. Galaxy Defenders, from Italian publishing house Ares Games, would be analogous to this band.

Galaxy Defenders is really quite good, for the most part, and it has a couple of features that stand out in what has become a very, very crowded scenario-based tactical miniatures genre. It’s the kind of game that is clearly standing on the shoulders of giants, copping its best licks from games that have gone before it. The “blip”-based hidden movement of Space Hulk is here. The area-regulated movement and action triaging of the Dungeons and Dragons Adventure System games is too, along with assigning players control of enemy figures. Yep, those multi-function dice that provide a number of combat effects and values from Doom and Descent are here. There’s even more than a little XCOM in the game’s alien-interdicting storyline. If that isn’t enough homage for you, there are tons of nods and references to classic science fiction films from the past few decades sprinkled liberally about.

None of that means that Galaxy Defenders can’t be a great game in its own right. But much like last year’s Level 7: Omega Protocol, it comes across as a design looking for a unique voice that it just does not have. There’s a sense of the generic throughout that keeps the game from building a viable world around the rules.

The storyline, cutting through a layer of fluff, is that the titular Galaxy Defenders gear up and head out to go shoot aliens. That’s frankly enough for this kind of game to work, and in general the rules for going out and shooting are well done. There are five distinct character classes roughly defined as a marine, a sniper, a heavy weapons specialist, a medic and a scientist. There are special skills that can be earned or learned and a host of equipment tiles and weapons (both terrestrial and extraterrestrial) that you can bolt on to the character cards. I shouldn’t even waste column space describing what you do as a player in this game, by know you should know that you move your move value and then make an attack rolling dice based on a ranged or melee attack skill.

It’s simple stuff, very intuitive. As noted, the dice resolutions are similar to the system Kevin Wilson devised for Doom, with one die roll determining not only damage but also the triggering of any special abilities and ammo loss for the shooter. It uses a contested roll mechanic, so the shootee gets to toss some defense dice, which may also result in a special ability or counter effect. The usual notions of blocking terrain, line of sight and map features all come into play. Stop me if you think…oh, never mind.

The bad guys- which are fairly generic but pretty dangerous aliens- are moved by the players. When you can’t see them, they are “blips” so you don’t know exactly what they are. When they come into view, you reveal the token , draw an card and put a miniature of that alien in its place. There are blue and green ones of varying strength and ability, representing a wide range of combat tactics and skills. Then, you give the card of the alien to one of the players because when the time comes to activate, they move it and make the choices.

Alien activations are done on every player turn. A card is drawn indicating which kind or kinds of aliens activate. All green ones, all of a certain kind or even none. Looking at each activated alien card, you follow a simple “if then” logic down a list of possible actions, mostly based on what the alien can see and what its range is. If they’re far away, they may just move toward the closest Defender. If they have line of sight, they may shoot once and then run away to cover. Or they may shoot a web or attack everybody they are adjacent to. There’s a lot of variety, and I think there are some real improvements to the system, which is as stated completely lifted from the D&D Adventure System games. The AI feels more “alive”- and in some ways more dangerous. The concept of moving enemy figures not space by space but by larger, multi-space regions is also drawn from those games.

Once all of the moving and fighting shakes down, there’s an event card draw that may have a global effect. Maybe it started raining, or maybe it’s really hot all of a sudden so everyone on a desert space takes a hit. Many event cards cause new blips to appear at portals. The entire event deck is staged and seeded before each scenario because there are usually one or two crucial turning points where the team needs to have certain objectives accomplished or partially accomplished to avoid something negative.

There are a couple of other adventure elements, most tied to the particular scenario you are playing. Maybe some of those blips are actually revealed to be human scientists you are trying to rescue. Or a room might need to be searched for equipment or for an alien artifact. Levelling up is a matter of rolling some dice at the end of a turn where an alien was killed and trying to get a “GD” result, which usually lets your character add a new skill to their card. Killing aliens may also give you a fragment of an artifact, and when four are collected you can select a new piece of gear for your team. There’s lots to play with- grenades, drones, medkits, the plasma sword from Halo, pulse rifles, EMP…the box is literally packed with things to do and see.

And to see it all, you’ve really got to play the campaign which is where I think Galaxy Defenders is at its best. The campaign is structured so that your success or failure in each scenario determines which one you play next, and there are often residual effects on the storyline or events. Everything can carry over, and by the time you get to the larger endgame scenarios, your Defenders are going to be tooled up and ready to rock- they’ll need to be, because the later setups are pretty difficult.

The one-off scenarios are fine, most ranging from 60 minutes to three hours and most play one to five players well without any kind of funky scaling required. That said, it’s best to play with all five characters even if you’re going solo- and the solo game is really fun. I played most of a campaign by myself and had a great time. It’s hard for my games gang to commit to campaign play of anything, so I was pleased to be able to experience the longer term appeal of the game without having to convince others to stick with it.

It’s not that the game doesn’t make a good first (or lasting) impression- it looks great out of the box with mostly good artwork and some very nice miniatures. It has a heft and breadth of components that is becoming rare these days in sub-$100 games. It feels like a big toybox, and it does all the things that games like this tend to do well. But it is also the kind of game where you have to ask yourself if you’re fatigued by the genre or if you’d really rather just pull out Doom, Gears of War, Incursion, Warhammer Quest or any of the other games in its heritage. Or if you’d rather just play XCOM on the iPad. And then there is the imminent approach of Star Wars: Imperial Assault, slowly moving into view from the top of the frame.

I don’t want to be too down on this game because it is a good one. But it’s also like one of those bands that you like and all but you know they aren’t going to impact your life (or the larger culture) like the really great, influential ones that have come before. There are, of course, expansions on the way and what I would really like to see happen with them is for Galaxy Defenders to find its voice, to distinguish itself more from its influences and to create a more compelling case for itself. It needs to do this soon, because practically everyone that plays these kinds of games is going to be looking at shooting up some Stormtroopers by the end of the year. And Galaxy Defenders doesn’t deserve to be forgotten so quickly.