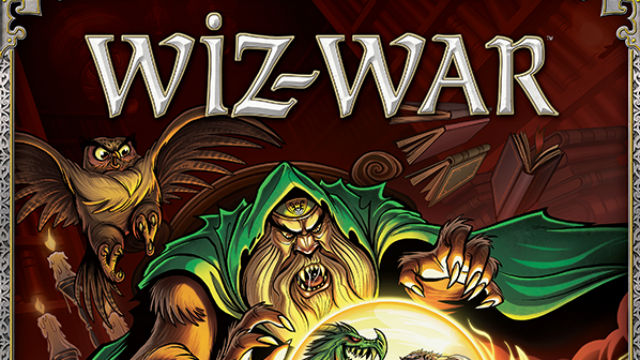 I noticed long ago that when people who tend to run role-playing games choose to play instead, they always pick wizard characters. Why? It’s all about power. If you’re used to having the ability to dictate reality on a whim, you want a character that can do it too. Power is a key part of wizarding’s appeal.

And there’s no greater demonstration of power than being able to summon fantastic creatures and bend them to your whim. It’s what’s always been missing from Wiz-War, and now it’s here with the Bestial Forces expansion. And while there’s no extra player figure and board in the box, there are an awful lot of other interesting spells and variants too.

The central draw here in the monsters, each with their own plastic figure. These beasties operate quite differently from their counterparts in previous editions. Rather than weak creations that tottered round older mazes, Bestial Forces monsters are flexible and powerful. You’ll pay for that power, though. Summoning demands not just a card but a cost in life, too, and activating a creature requires the controller to sacrifice 2 movement points.

Just like the previous Malefic Curses expansion, there are three new schools of magic in the box. The Legendary school has the most monsters. There’s the powerful minotaur which has an odd sort of automatic overwatch attack. The genie who’s an attack spell conduit, allowing you to play an extra offensive card each turn from the genie’s square. Finally there’s the Boggart, the only creature who can carry items and Grendel, who’s a melee powerhouse.

It also a adds a fun new component called relics. These spells create very powerful objects that will be a huge boon in the game. But the catch is they also take up a treasure slot. So it’s a toss up whether to steal the chest or leave the valuable relic lying round where anyone could find it.

Another way in which monsters are different from previous versions of Wiz-War is the addition of creature attack spells. These can be used as standard attack spells by a wizard. But instead, you can employ them to supplement your creature’s attack instead. They belong in the second of the new schools, the Draconic school. As well as creature attacks, there’s a good mix of typical defensive and utilitarian spells. There’s a creature, too, the Drake, who will guard your treasure with fierce determination. 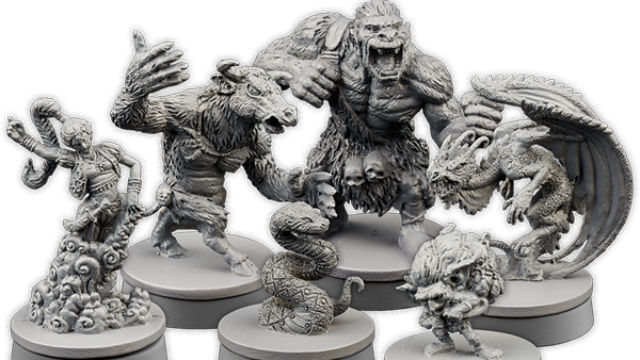 Oddest of all is the Totem school. These spells create on-board objects which buff their summoner so long as she’s in the same board sector as the totem. They can’t be carried, but can be destroyed so they give rise to a lot of interesting tactics around placement. Do you sit and use your totem, or follow targets to a new sector? Do you destroy enemy totems or lure their owner into a trap on another board? There’s also a Totem Spirit creature which can move though walls, and inflicts damage equal to the number of totems in play. So it’s potentially very powerful.

There’s only one downside to Bestial Forces, which is that you’ll have to adopt a specific mix of optional rules to get the most out of it. Sadly, that includes not using the Giant Book of Spells like you did in previous editions, which is so beloved of many fans. The reason is simple: most of the cards in this expansion are tightly connected. To get the most out of the Totem Monster you needs lots of totems in play. With most of the creatures in the mythical school and most of the creature attacks in the draconic school, they work well played together. Diluting them in a big stack lessens their impact.

Fortunately there’s another optional rule in this expansion to compensate. You make a core draw deck with three schools plus cantrips, then give each player their own draw deck of a specific school. They can then choose which to pick cards from. So if you make the core deck all the schools in this expansion, you can enjoy the way their effects interlock. While individual player decks ensure there’s still plenty of variety and chaos.

Most of the other options you’ll want, like uncluttered minds and permanent creations are common choices anyway. So they’ll have less impact on your games. These are good to use with the expansion just because it leaves more monsters and artifacts and totems in play. Relics, in particular, are a double-edged sword if you can’t get rid of them. Especially so if you use the treasure hunters option. And the more stuff on the board, the better Wiz-War gets.

A part of me misses the classical monsters of wizarding lore. It might have been nice to imagine stiff-limbed skeletons and their ilk stalking through the labyrinth and being felled by the first Zot they come across. But in their place we’ve got a bold and well-designed expansion which adds to both the chaos and strategy of the game. I’ll take that trade, and I’ll wager almost every fan of the base game will be happy if they follow suite.