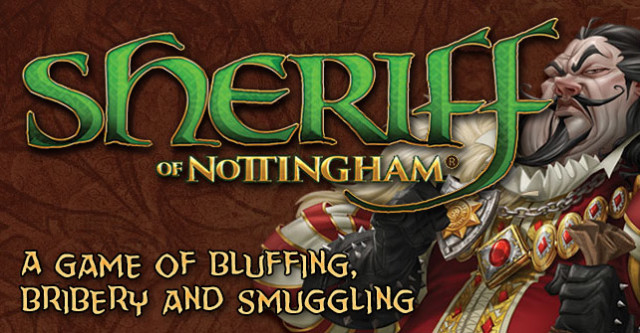 I played Hart an der Grenze some years ago with a friend who has since become something of a mover and a shaker in the games business. He kept raving about this “Mexican suitcase game” that was about smuggling goods across the border in tin suitcases. It was also, effectively, a game about customs declarations. It was cute, definitely one of those one-shot “stunt” productions that winds up going out of print and vanishing into obscurity- while going up in value. I didn’t really like the game all that much. At the time, I felt like it was one of those games that had both too much and too little game onto which it was trying to pin its friction and fiction. But it just didn’t engage me. It was back in 2006, so we hadn’t even gotten to Battlestar Galactica and the countless other games that have followed in its wake where straight-faced lying is an impetus.

And now the game is back in a new edition from Arcane Wonders, the folks that do Mage Wars. It’s part of a “Dice Tower Essentials” line vetted by the most popular pundit of modern hobby gaming, Tom Vasel. The new edition is obviously recast with a new setting, handsomely produced with velvety envelopes (with snap closures and screen-printed game logos, no less) instead of the suitcases and the concept is changed so that players are merchants attempting to get illegal goods past the titular lawman of Robin Hood lore. Apples, chickens, cheese and bread make up the legal sandwich. But crossbows, mead, pepper and silk are the items that the corrupt sheriff is looking to confiscate.

Each turn, players get to put cards into their pouch that they will attempt to get through the inspection. They can stick any mix of legal and illegal goods in their bag. There is a declaration phase, where everyone declares to the current sheriff player what legal goods they have in their bag. Of course, the player may lie, declaring four apples when they are actually bringing in just one apple and three mead cards. Or they can completely be honest. The only stipulation is that illegal goods cannot be declared, so a player has to lie about them. The sheriff player takes up all of the merchants’ pouches and decides which he will inspect. Players selected for inspection may attempt to bribe the sheriff to look away with gold, goods from their market stand or promises- maybe a “free pass” the next time that player is the sheriff or something like that.

If the sheriff lets a player pass, all of the goods in the pouch go the player’s market stand. However, if a pouch is inspected, two things can happen. If the merchant player was completely telling the truth and the contents match their declaration, the sheriff is penalized. He has to pay the aggrieved player an amount of gold per legal good card. If the merchant player was lying, all legal goods pass through but the contraband items are confiscated and go to a discard pile. The smuggler also has to pay the sheriff a fine for each of the illicit cards.

There are some subtle tricks that you can pull. For example, you can promise the sheriff goods from your bag, but then lie about what’s in the bag so that- oops- there’s no cheese in there to give him after all. Or you can wheedle and plead, offering a fat bribe, to not get inspected but then actually have all legal goods in your pouch. The sheriff player might then be lured into inspecting your bag thinking you’ve got something to hide. But then he winds up paying you the penalty when it turns out you were completely honest.

If it isn’t already clear, this is definitely one of those games that is really only as entertaining as the people you are playing it with. If your table isn’t totally sold on the concept and setting, play-acting and co-creating the narrative, then this game is DOA. This requires players to embellish the game as written quite a lot, because without the dramatic alchemy between players there really isn’t that much here other than a basic and repetitive interchange that boils down to “I think you’re lying”/”no I’m not” with some scoring at the end. The players have got to effectively write this game’s script, working in its structure or else it stumbles. Players have to collectively create a high stakes environment.

Without the buy-in from every player at the table the game is not engaging or even worth playing. Every game I’ve played of both previous edition and this new one has had at least one player (including myself) that hasn’t given back what the game is asking you to for whatever reason and every time I’ve felt like it was weakened because of that fact. There’s a vast difference in the experience between committed players and those who aren’t working the social angle of the game, which puts this title in kind of an awkward spot between a negotiation game and a party game. And it sort of makes me question how much of what is good about Sheriff of Nottingham is actually written in the rules or contained in the box and how much of it is simply the entertainment value of interactions that include lying, swindling and other morally questionable actions that would be anathema outside of the context of a make-believe game.

There are couple of twists that make this work as a game and not just as a structured social exercise. There are victory points, tallied up at the end based on what is in your market stand and any money you have left. The legal goods also pay out a VP bonus at the end of the game if you have the most or second most of an item at the game’s end. So there’s a set collection scoring mechanic in place. Another is that when players draw cards, they can either draw from one of two face-up discard piles or a regular face-down draw deck. So if a player is drawing contraband, players should take note. But if a player is trying to collect chickens to become the Chicken King and there are chicken cards he’s drawing crossbow cards from the discard pile to get to, he may inadvertently tip off potential sheriffs that he might try to slip some of those past the inspection line.

At higher levels of play, if they really exist in this kind of game, there is a bit of card-counting that can come into play. If someone takes illegal goods out of discard, it’s known to the table. And the count of each card is public knowledge, so if someone declares that they have a chicken, you have a chicken in hand, and all of the other chickens are on the table…well, you get the picture there. There are also some either/or mathematic rationalizations to determine if paying a bribe is worth the ROI considering what is in your bag. It almost feels like there’s too much “game” underpinning certain elements of it, including the majorities scoring at the end.

The last time I played Sheriff, a friend of mine from way back really kind of said it best- “this game is twice the rules of Intrigue but only half as good.” And I agree. Intrigue, a Stefan Dorra design that should be played by anyone interested in this kind of game, is almost anti-mechanical with the entire game existing primarily between players. There isn’t much to get in the way of the frisson of straight up lying to your friends and the victory condition is just to make the most money. So with Sheriff, I’m finding that when I think about playing it again I tend to veer toward wanting to play Intrigue again instead. Or something like Cash & Guns, that has more immediacy and on-the-table douchebaggery and less VP-counting at the end.

One thought to “Cracked LCD- Sheriff of Nottingham in Review”