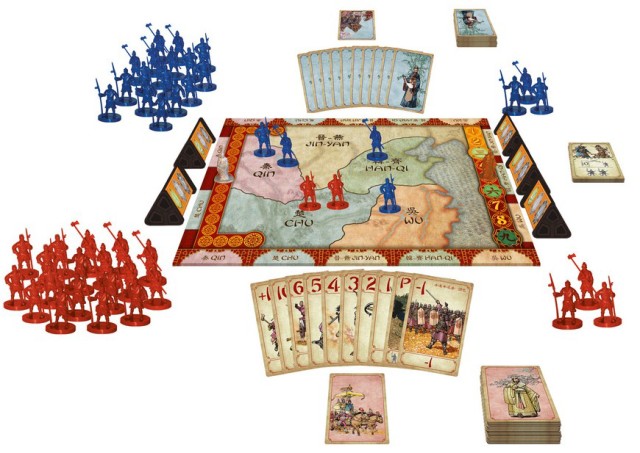 Almost ten years ago, I got a little game published by Jolly Roger in stock at my brick and mortar store, Atlanta Game Factory. It was called Dynasties, designed by Al Newman, and it was a crackerjack little two player Dudes on a Map game that played in less than 30 minutes plus whatever overage that the inevitable rematches incurred. Among my employees and a few of our regulars, it was very much a go-to game, a pick-up-and-play title that was damn easy to teach and with ample depth- and drama- to maintain interest. It is also possessed of a critical quality that defines a great two player design- the parallel curves of game knowledge and skill. Once players know the cards and understand the importance of bluffing against that knowledge, it becomes very much a tense game of nerves, daring and the occasional surprise round that sweeps the board and makes for an exciting finish.

But I had this game figured as one of those more obscure minor releases that would have its time, fade out and be remembered fondly despite a European release in 2010. I never expected to see a new US edition of it, let alone a very nice new issue out by Matagot (the folks that do Kemet and Cyclades) and published in the US by Asmodee. The new edition is called Sun Tzu, and it maintains the original game’s Imperial China setting. Sun Tzu and King Chu are the rivals in a blue versus red struggle for five provinces in the Chinese empire. Everything about this edition is bigger and bolder. It now feels like a natural fit for the Matagot line and fans of modern, innovative Dudes on a Map games will find much to enjoy here.

The plastic figures, including gold and silver figures of the generals, are fun and make the game feel larger. The period illustrations on the cards look fantastic and overall the production is absolutely on par with Matagot’s larger releases. Almost nothing has changed from the original design, because frankly, nothing needed to be.

Each player has an identical deck of battle cards and a core set of cards numbered one through six. On each of the game’s nine turns, both players play one card into a planning slot for each of the map’s five provinces. The value of each province changes over the course of the game. These values are displayed on a rotating score counter for each. So a territory worth four points in the first scoring rounds might decrease in value to one in the second and rise again to three in the final tabulation. So careful cardplay and resource budgeting is critical.

Once cards are locked in, both sides reveal. High card wins, and places figures equal to the difference into the territory while subtracting one for each enemy unit displaced. The one through six value cards always come back into hand, but there are higher value cards and tricky cards that do things such as counting +1/+2/+3 over the played enemy card. There are plague cards that wipe out half of the units in the province. And there are -1 cards that allow a player to enact a strategic withdraw, important because the number of figures a player has over the course of the game is limited. And focusing too much strength into a territory may wind up wasting potential elsewhere on the map.

There is no on-board movement- it is all card-based placement and displacement. This may sound static or deterministic, but the element of bluff and anticipating a player’s action is where the really compelling elements of the gameplay come to fruition. There may be two provinces worth four on the map- but which one is a player going to play his six card to? Or will he play one of those +1 cards to automatically win it? Or maybe he’ll intentionally play low to win in other areas. The possibilities are not endless, but this is one of those kinds of games where the player has multiple options for focusing strength, selecting which battles are worth winning and ultimately for outwitting (or outlasting) their opponent. Event cards offer a bonus to the player that fulfills a condition. Each player can also select a “General” card that gives each side a unique bonus. I don’t think either of these are essential, but for those who want just a touch of asymmetry to the contest they will be a welcome element.

It’s all extremely well-balanced but man, this game can swing. With the scoring rounds popping up on the third, sixth and ninth rounds, you can bet there’s going to be some big plays to try to get those high value areas. One player might sweep the board, leaving the other player in complete traction for the next period- dangerous, because the scoring is a differential and if one loses too much ground it can be impossible to recover. But then the next set of three rounds might see a total counterattack with the OTHER player dominating and swinging the score pendulum back the other way.

If you’re good at it and know the cards, you’ll see greater success. New players versus veterans might find the game frustrating even if they get a few wins on the map. But once proficiency kicks in, the sense of attack and counterattack emerges and players aren’t doing things like running out of men too early in the game. This is when Sun Tzu starts to move from being a really good two player game to a great one.